I recently moved house and as much as I love my new house there is a massive problem: there is no ADSL available in the area which means I’ve been shopping around and checking out all my options – and as such I will be bringing you some reviews of alternative Internet options in South Africa.

First up we have the Vodacom LTE which was kindly supplied for reviewing purposes by Vodacom SA. In the box that arrived was a Vodafone LTE 4G USB stick and a Huawei HG659 home router.

Unfortunately the first delivery was a bust as the USB stick just wouldn’t work with the Huawei router.  It worked perfectly plugged into my computer but for the life of me I just couldn’t get it to work with the supplied router or any of the other 4 3G routers I had in the office. Eventually I admitted defeat and contacted the PR lady who quickly organised a swap out.

A new box arrived with the exact same objects inside but this time it worked perfectly right off the bat. You plug the USB stick into the side of the router and then power the router up and in under 2 minutes you are blitzing along the Information Superhighway…we should bring back that term.

So for ease of use, when the equipment isn’t faulty it gets a full 5/5.

One of the biggest issues around any mobile Internet solution is coverage so off I headed to the Vodacom LTE coverage page and took a look.. and it didn’t look good.

The little red pin is around about where my house is. The purple square in the right corner is where the Vodacom LTE coverage ends according to their map. However we all know these maps are just an approximation so we tried anyway. I played around a bit with location and upstairs near the windows I could average a 23mb/s download with a 6mb/s upload and 20ms ping.

Unfortunately the wifi from there doesn’t reach my office downstairs very well so I moved it back down  and on average we get between 10mb/s and 16mb/s download speeds and 4mb/s uploads. 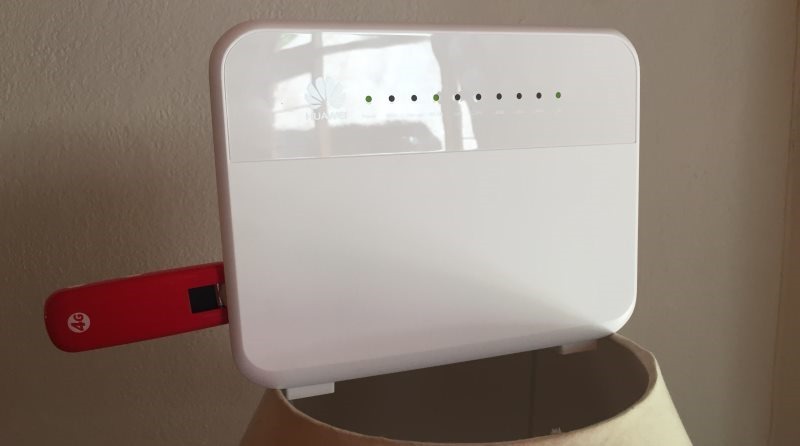 The latency fluctuates between 20ms and 35ms which is still more usable when playing games online. But these are local pings and tests, when I test against a server based in Manchester the ping times increase to 194ms with the download dropping to 3Mb/s and the upload to 1Mb/s which is still usable but definitely not flying anymore.

So it worked well for gaming. Yes, it could be better but if you are playing games that don;t require lightning-quick reflexes then it works great – and I could still top the leaderboard in a few Call of Duty games. The major latency problems with 3G and other wireless providers don’t seem to affect LTE at all which was my biggest worry.

You can also use the connection to stream Netflix, Hulu and the like as long as you sign up with Unotelly. In my house we cancelled DSTV a while back and a normal evening would see 2 or 3 streams being watched simultaneously without any issue.

So download stream works well and when placed properly, and with some solid coverage I was able to stream to Twitch in full HD. I definitely noticed my ability to play dropped a bit with the streaming adding latency to the game, but if you are interested in streaming Hearthstone or other games like that then it works perfectly.

And this is where the LTE problem comes in for all of us. When I was on my ADSL line I used around 300Gb a month due to our heavy streaming and at the current Vodacom LTE rates that would work out to be around R7000 a month which is obviously not viable. But if you don’t watch streams and just need a fast and reliable internet for general usage then you can get a 10Gb package, with an extra 10Gb at night for R499 which is definitely affordable.