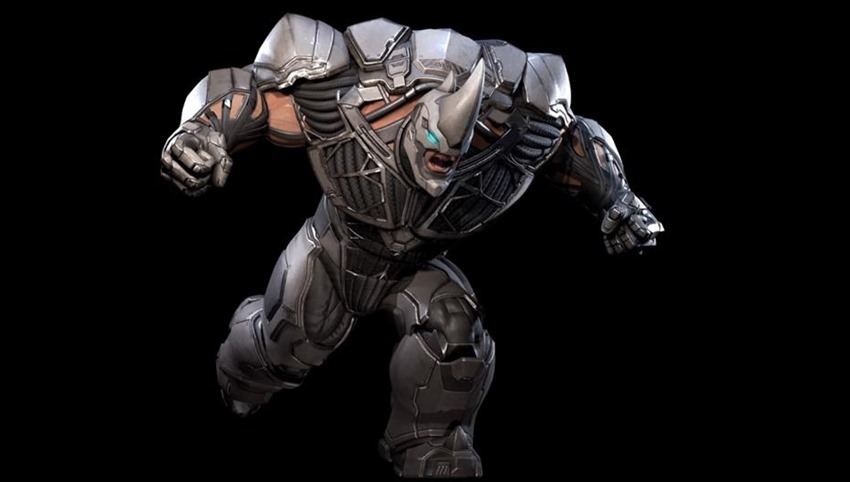 Easy money, easy life. Aleksei Sytsevich was one of the top enforcers in the Russian mafia, but even his reputation as a brutal enforcer for the Bratva wasn’t enough for him to secure the cash needed to support his family. Volunteering to undergo experimental gamma radiation treatments over several months that would guarantee a safe life for his loved ones, Sytsevich was enhanced beyond peak human condition and outfitted with a cutting-edge suit of armour that made him almost unstoppable as…the Rhino! 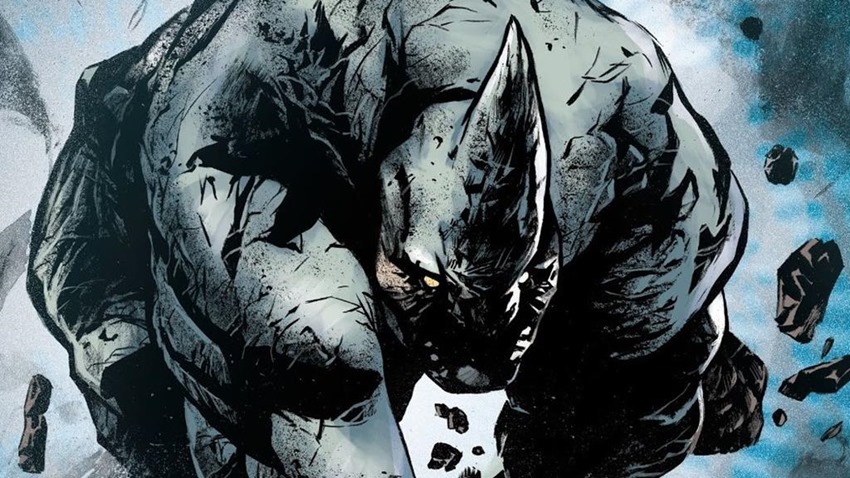 With further post-hypnotic suggestions from the Russian mob that made Sytsevich believe that he was actually the thuggish Alex O’Hirn, the Rhino’s first mission saw him tasked with kidnapping Daily Bugle publisher J Jonah Jameson’s son John Jameson, who would later be ransomed. Barely stopping him, Spider-Man discovered that he could exploit two key weaknesses of the Rhino: His stupidity and his inability to halt his charge once he began running.

Spider-Man and the Rhino would fight several more times over the years, with the webhead always emerging victorious and sending “O’Hirn” back to jail. Clashing with the Hulk as well over the years, the Rhino led a sad life of constant defeat, with his family eventually learning of what had become of Sytsevich and spurning him.

Trapped in his suit, the Rhino decided to enhance his intelligence, but even this procedure was fraught with peril and resulted in “O’Hirn” becoming suicidal. Reversing the procedure, the Rhino returned to his dull-witted persona. With the hypnotic conditioning eventually wearing off, the real Sytsevich identity finally emerged and the Rhino even managed to separate himself from his suit. 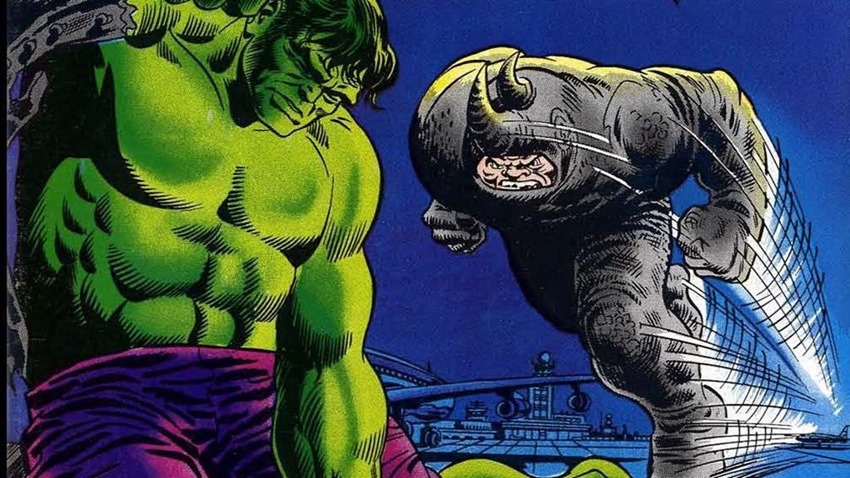 After a few more misadventures that culminated with Sytsevich failing to invade Wakanda, the Rhino eventually gave up on his criminal ways and willingly handed himself over to authorities during the Civil War. With good behaviour drastically cutting his prison sentence down, Sytsevich even made parole and found love. It was not to last.

Confronted by a new Rhino who wished to best Sytsevich and prove himself the superior man-beast, Sytsevich’s wife Oksana was eventually murdered by the new Rhino and that was left, was revenge. Donning his armour once again, Sytsevich brutally beat his doppelganger, killing him and returning to his criminal roots. 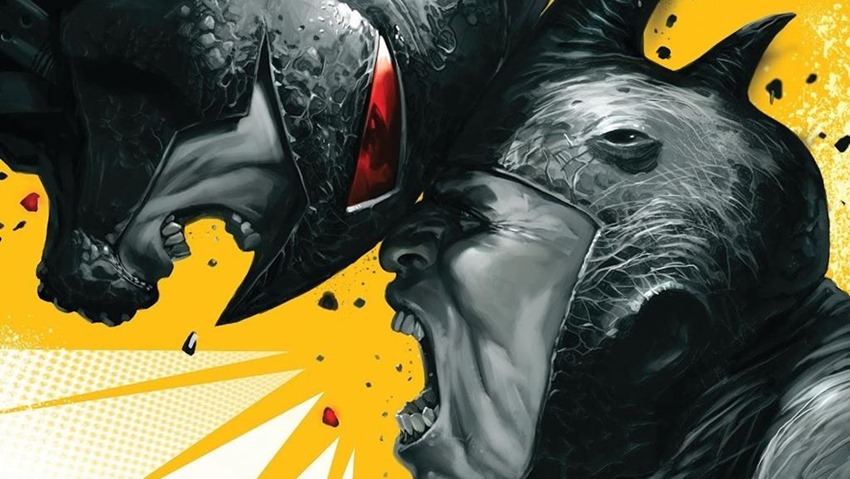 Since then the Rhino has even survived death, discovering redemption and setting out to honour the memory of his late wife. Whatever the obstacle in front of him though, beware the horn of the Rhino as nothing can stand up to Sytsevich once he begins charging on his objective.

Contrary to popular belief, the Rhino’s strength comes not just from his suit but primarily from exposure to Gamma radiation that successfully enhanced his physical power. Enlarging Sytsevich’s muscular structure and making his physical biology denser, the Rhino has repeated this process over several years to further amplify his raw power. Capable of lifting more than 75 tons of weight without his costume, the Rhino can bulldoze through a 100 tons of matter when he dons his armour. 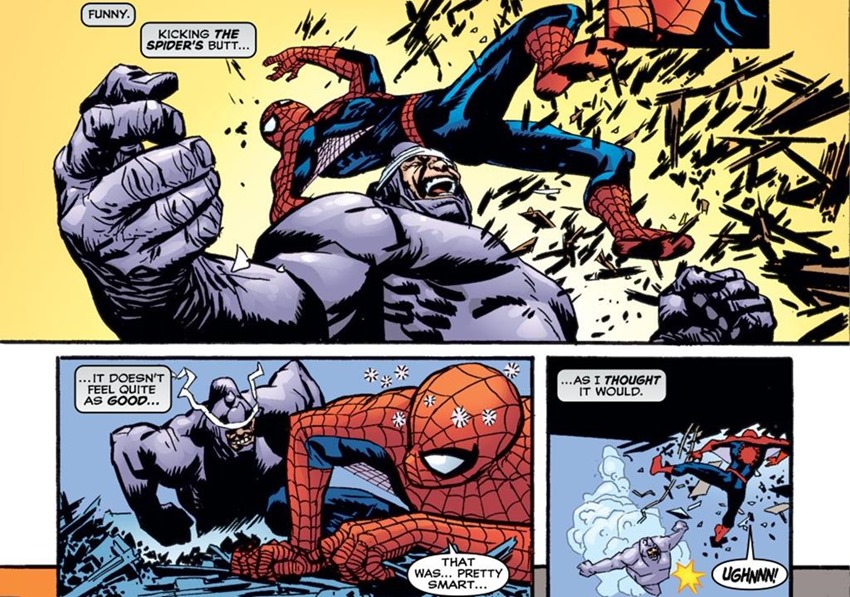 While he may not be a martial artist on par with Iron Fist, Sytsevich is still an experienced street fighter who knows how to use his large physique to dish out as much damage as possible. 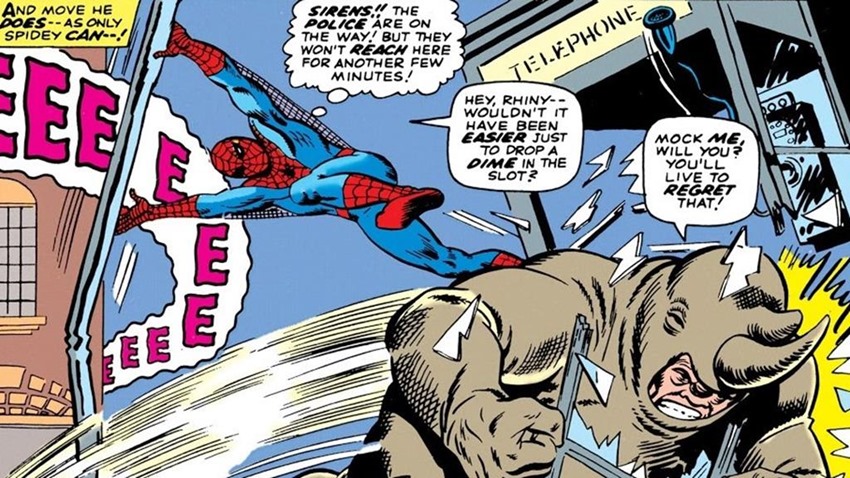 Despite the fact that he happens to be gargantuan in size, the Rhino can run faster than a regular car when he builds up enough momentum. 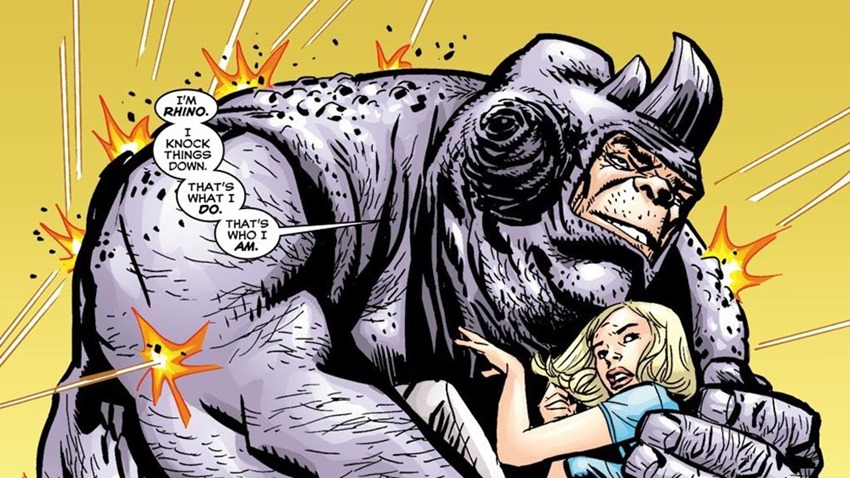 With his gamma-irradiated physique, the Rhino’s musculature produces far less fatigue toxins than a normal human during strenuous activity, allowing Sytsevich to exert himself at peak condition for up to 24 hours.

Outside of his suit, Sytsevich can stand up to a hail of bullets and various other forms of physical punishment. With his armour on, Sytsevich has survived 1 ton TNT explosions, sub-zero temperatures and artillery fire. 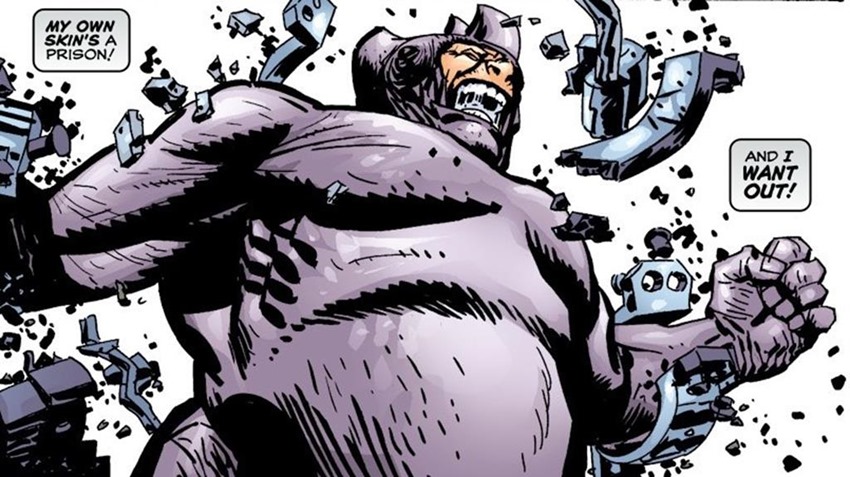 The iconic suit worn by Sytsevich, the Rhino Armour is a miracle of science that uses advanced polymers to create a suit that is almost indestructible, taking on a texture that resembles rhino skin. Enhancing Sytsevich’s physical attributes, the armour also has two horns on the head that are capable of easily piercing through 2-inch thick plate steel. 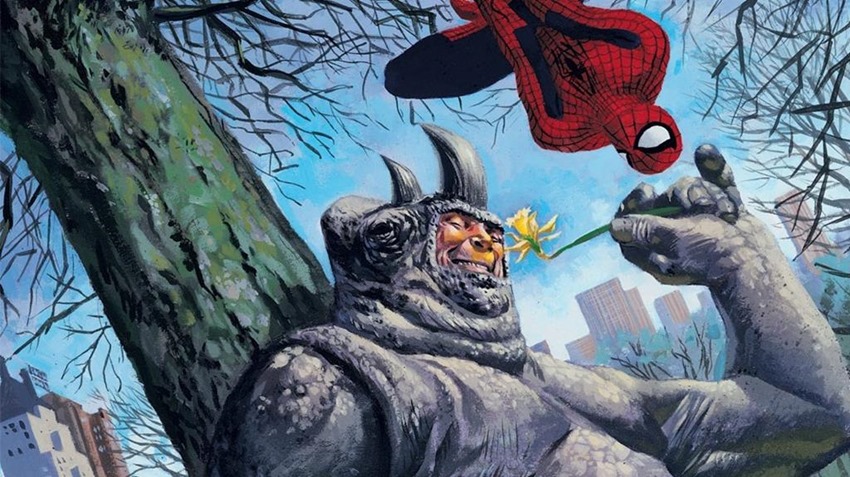 Tired of being a dullard, the Rhino has his intelligence augmented and quickly uses his newfound cunning to become a criminal mastermind. Earning respect and fame with his enhanced thinking, the Rhino soon discovers that ignorance is indeed bliss, as that which brought him joy in his simpler life no longer has the same effect on the cleverer supervillain. It’s a race against the clock for the Rhino, as he has to find a way to restore his stupidity before it’s too late! 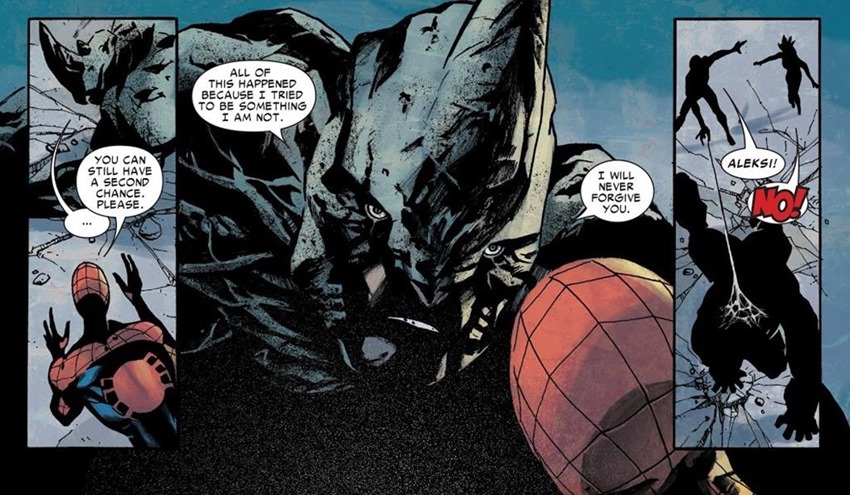 Redeemed and rehabilitated, the only thing that Aleksei Sytsevich wants is to lead a normal life with the one person who loves him. Stripped of that joy by a new Rhino who wants to prove himself superior than the original, Sytsevich has no choice but to unlash the animal inside after the new Rhino goes a step too far in his schemes.

Spider-Man: Ends of the Earth 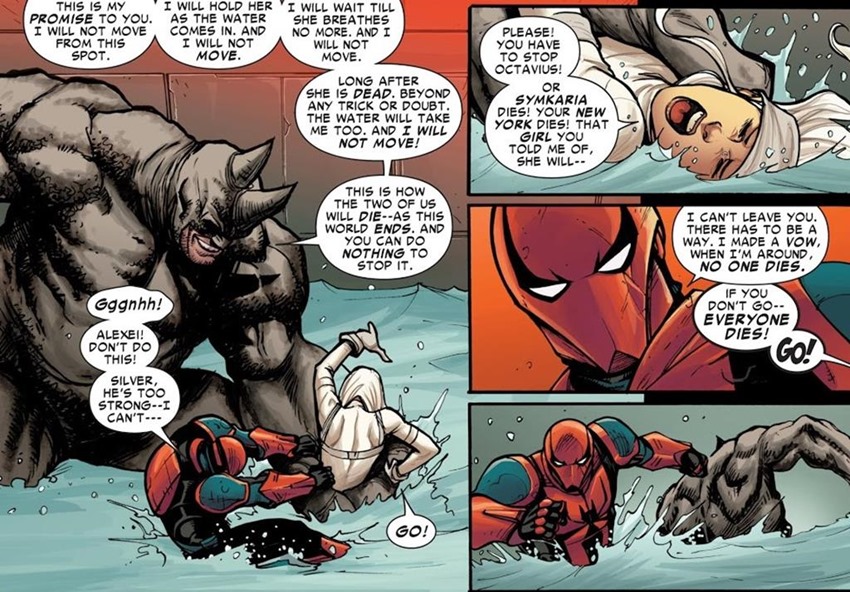 The end of the Rhino! Or is it? Recruited to Doctor Octopus’s new Sinister Six, the Rhino finally has Spider-Man right where he wants him, as the webhead is faced with an impossible choice that even some sensational web-slinging can’t solve for once. 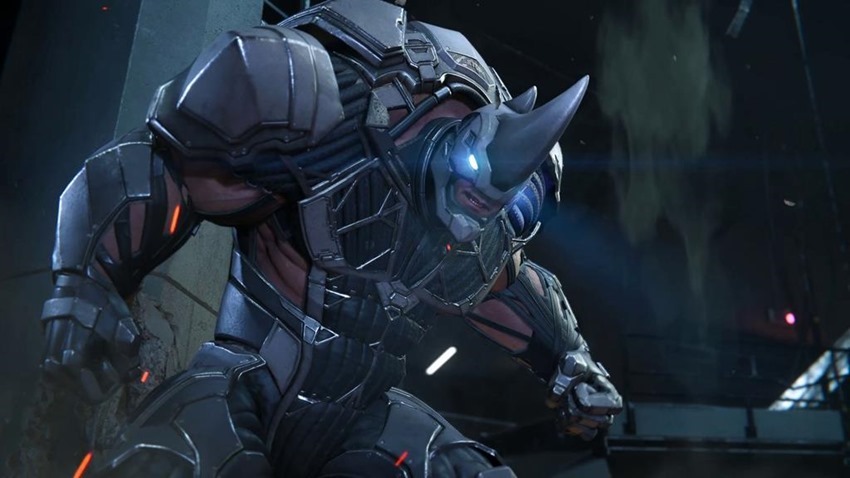 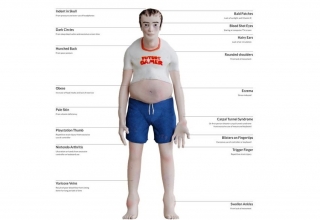 There’s a stereotype out there of gamers being a bunch of unkempt basement dwellers engaged to their anime waifu pillows, but nothing could be further from the truth in this day and age. A truth that the Daily Mirror clearly forgot about with their latest feature on what the gamers of tomorrow will look like.