Remember a time when gaming was all about fun? “Online” multiplayer gaming wasn’t viable, DLC and micro transactions didn’t exist? Remember when “multiplayer” gaming meant having a bunch of friends around, each with a controller in hand and a butt on a couch? Towerfall: Ascension brings that magic back.

Towerfall was actually an Ouya original, and touted as the system’s “killer app,” but it’s now been released on systems that more people actually own; the PlayStation 4 and PC. It’s got a new subtitle, Ascension, subtly telling you that it’s risen above its past. 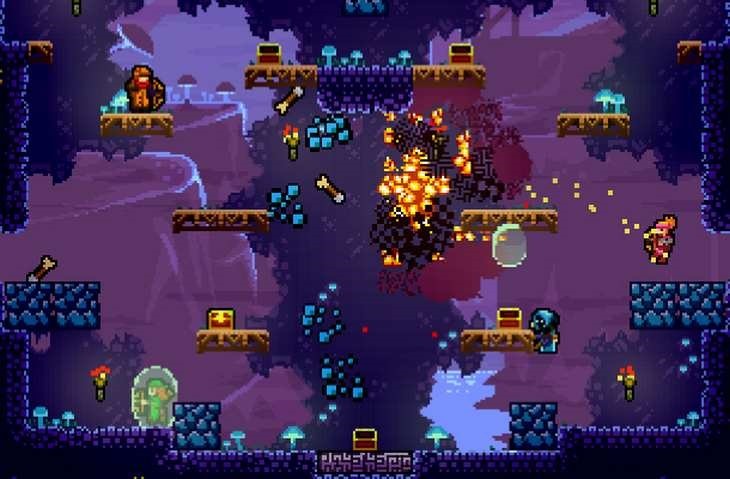 It’s quite a simple two-dimensional game, though it harbours a hidden complexity making it one of those “easy to play, hard to master” sorts of games. Its main mode, adversarial multiplayer, pits up to four players against each other in single-screen levels in a game of archery to the death.

The controls are simple: you use the d-pad or left analogue stick to move about and aim. Using the controller’s buttons, you’ll be able to jump, unleash an arrow or evade. The action is fast and frenetic, with rounds lasting not very long at all. At first, you’ll probably try to take out your friends with just arrows, but you’ll start noticing a little more nuance to it all. Arrows are limited; you’ll start with a quiver of just three – and you’ll have to pick them up after letting them fly. 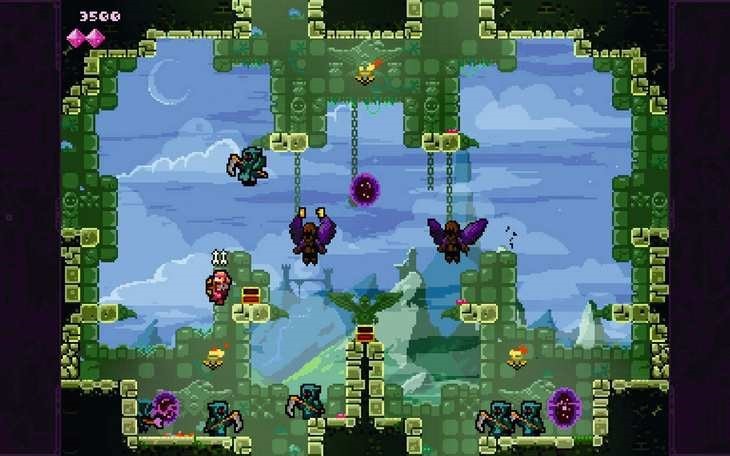 There’s no line of trajectory, so you’ll have to learn the game’s physics system to pull off more impressive, crazy shots.  You can steal arrows from other players by bumping them, or stealing their lost ammunition. Jumping on a foe’s head spells instant death for the afflicted, perfect for when you’ve exhausted your own supply. You can wall jump, allowing you to reach higher platforms or evade arrows. Using the dodge button as you’re shot plucks the arrow from the air…like a pixellated Bruce Leroy in The Last Dragon. Dodging has a short cooldown though, so knowing exactly when to dodge is important. The hidden complexity makes the action all  the more gratifying. Power-ups come in to play too. Chests appear at intervals on the map, with the first to reach them awarded some sort of conferred bonus – like extra arrows, explosive ammos, or wings that allow you to fly around the level. 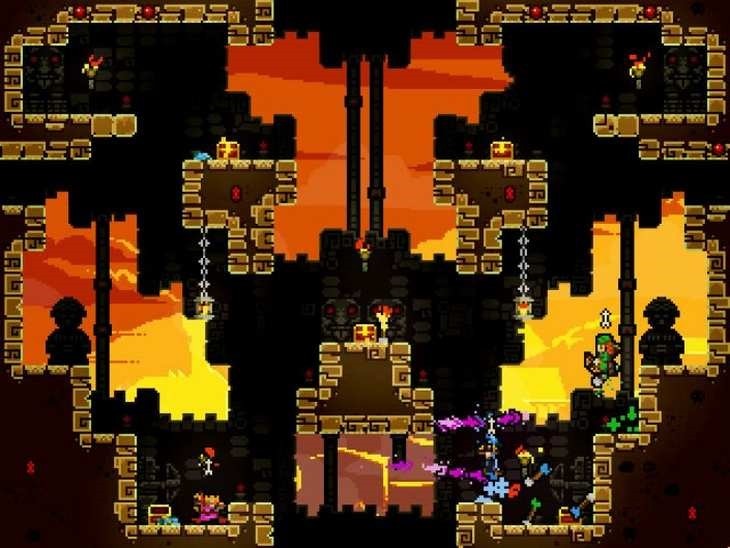 The game comes with just a handful of modes: Versus, the game’s primary mode;Trials – which have you practising your skills on straw-filled dummies in timed challenges, and a brand new single-player or co-op Quest. This new mode adds a little meat, tasking you (and a friend!) with completing 11 stages where you must overcome waves of increasingly difficult enemies

Within its primary versus mode, you got a few gametypes; Headhunter, which awards “skulls” for kills with the aim of being the first to reach a target score; Last Man standing, which as the name implies awards points to the last remaining survivor and Team Deathmatch, which really doesn’t need explaining. A large number of options exist to customise your matches, with variables for the types of starting ammo, powerups, level types and even an option to have slain opponents return as ghosts. Find a rule set you love, and you can even save it as a pre-set for future games. 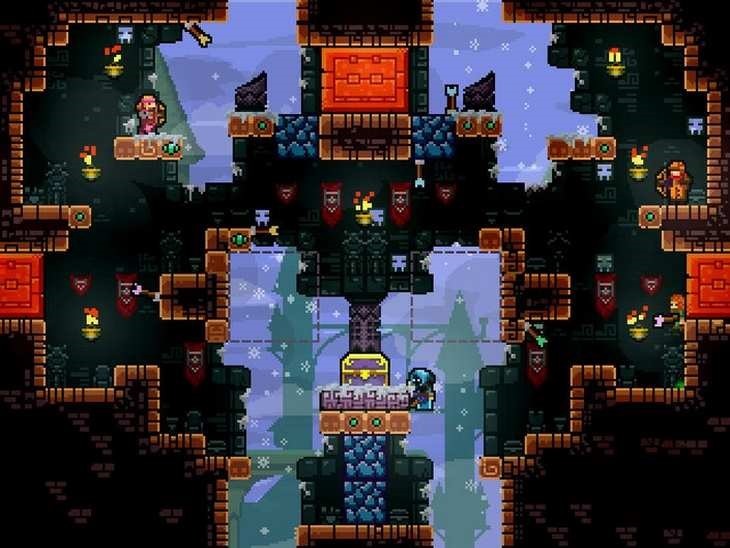 With a delicious 16-bit aesthetic, Towerfall: Ascension is perhaps some of the most fun I’ve had playing any game all year – but with a caveat; you’ll need friends and extra controllers. Mutiplayer here is the local only sort but if you have any sort of social standing there’s a lot to enjoy. I played the game this past weekend with my family, and it was a blast, with just about every round ending up in screams of riotous laughter, exclamations of “how the hell did you do that?” and sore loser punches to arms.