Home Entertainment Prepare to get creeped out by this SINISTER trailer

2012 seems to be good year for cinephiles in general, but an uncommonly great year for horror fans. Classic styled ghost story The Woman in Black (our review of which will be out closer to the local release date) started the year off strong, The Apparition looks horrifyingly promising and after seeing the trailer for The Possession, I am not ashamed to admit that I wanted my mommy.

Well, I guess it’s time to call for my daddy, my aunts, my uncles and possibly even a distant cousin or two whom I haven’t seen in a while, because this first trailer for Ethan Hawke’s Sinister may result in me never watching family home videos ever again.

Directed by Scott Derrickson (who previously helmed the modern The Day the Earth Stood Still remake), the film played at the SXSW Film Fest earlier in the year where it received some very positive reviews almost all around, and judging by that creepy trailer I can see why.

As a kid there was few things as enjoyable as playing with an empty box, just letting your imagination transform it into anything you needed. But that moment in the trailer where that girl climbs out of the box backwards has just gone ruined a whole lot of fond memories. Also, underwear. It definitely ruined some underwear.

“Sinister” is a frightening new thriller from the producer of the “Paranormal Activity”films and the writer-director of “The Exorcism of Emily Roses.” Ethan Hawke plays a true crime novelist who discovers a box of mysterious, disturbing home movies that plunge his family into a nightmarish experience of supernatural horror. 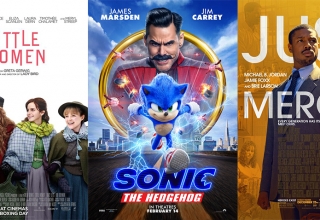 For probably the first time ever, the internet collectively bullied a major film studio into redesigning their main character, so it's worth supporting Sonic The Hedgehog when it opens today... even if it's just to support those poor VFX artists that worked crunchtime to get it sorted.