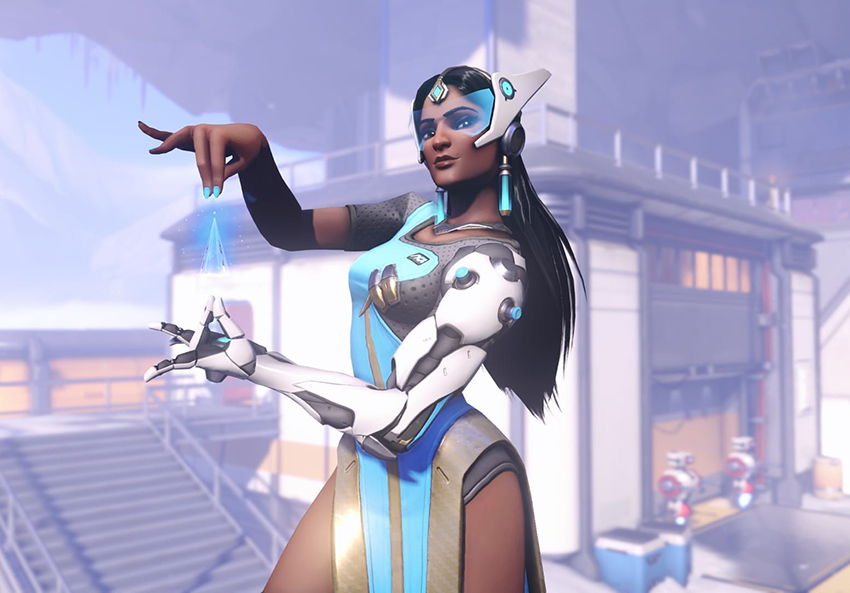 There are few heroes in the Overwatch roster as contentious as Symmetra. Currently, the support hero sees the lowest pick rate at the pro level and even playing her in public matchmaking will often earn you nothing but scorn and anatomically impossible insults about your mother. While some Symmetra mains think the biggest problem is actually other players who don’t know how to play around her (and that argument certainly has huge amounts of merit), there’s a definite glaring issue that she can be very limited in her application, only really being fully utilised in very niche situations. Overwatch developer Blizzard is fully aware of this which is why we’ve been hearing for months now that they were looking to rework her kit and possibly even move her out of the support role, we just didn’t know how they would go about doing that.

Well, that all changed this weekend past when Overwatch lead designer Geoff Goodman took to official Blizzard forums to answer some fan questions about their plans and revealed their current ideas for Symmetra. Insane sounding ideas, that is.

We currently have moved her to Defense. We tried a healer version which had her turrets healing instead of dealing damage, but it felt super awkward, especially with how fast Overwatch moves.

That said, we are playing with a new way her turrets deploy. Instead of having to stick them directly onto a wall herself, she can now fire an un-deployed version like a projectile, which sticks to walls/ceilings/etc. Once it sticks, it will unfold like it does on the wall currently when she builds them. This helps for a bunch of reasons but one of the big ones is that it makes it a lot easier to play her on offense or just be able to preposition her turrets much more easily/quickly.

Currently they will travel effectively infinitely in a straight line. (think of them like Pharah rockets). The projectile speed isn’t super fast though so enemy players can see them coming. They can’t currently shoot them out of the air though, but we’re still iterating and may allow this. 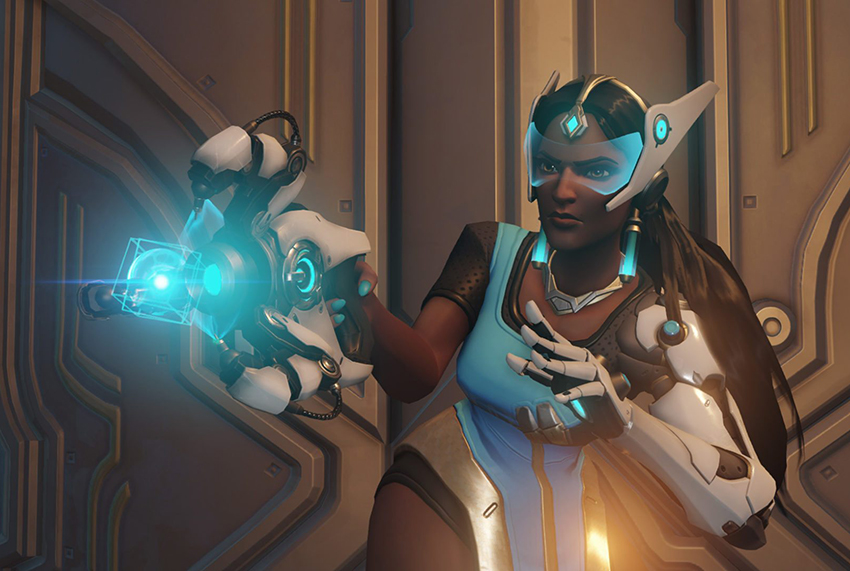 This is a big deal, as part of the annoyance of playing Symmetra is that once the enemy breaks through a chokepoint which you had turned into a turret nest, there was no way for you to reposition your turrets effectively except to either fall far back or jumping right into the enemies frontline and what would certainly be death. With the new ability, you could potentially fire the turrets from a safe distance to behind, above, next to the enemies to catch them by surprise without endangering yourself.

To balance all of this potential out, Blizzard will be halving the amount of turrets Symmetra can deploy (currently six), but will then be making them more effective as well.

There are other changes to her turrets as well. We’ve lowered the max number to 3 (both that she can hold and that can be deployed), but we’ve increased their damage and slow potential. They also have 30 health currently, though that number will probably change over time as we test. They still die quite easily but there is a significant difference between dying to any damage and just having very low health.

So far we’ve found the turrets to be much more powerful this way, not less. Keep in mind its almost like you’re deploying 2 turrets at a time now, since they are more powerful individually. You lose a little bit of map coverage, but overall the turrets are actually more impactful, not less. Plus spending less time re-deploying turrets frees you up to do other things at the same time, rather than spending so much focus on moving around trying to keep your turret nest up somewhere useful.

Deployment of turrets is not the only changes for Symmetra’s kit though, as her primary weapon – a lock-on beam of hard-light which increases in damage the longer you stay locked onto a target – may also be getting some fairly significant changes.

We’re still trying some things but whats working pretty well right now is her primary fire changed to no longer lock on but works as a straight beam that is fairly thick and has increased range. It still has the potential to gain extra damage by dealing damage like it does now, but instead of going 30/60/120 dps it is currently 65/130/195 dps. However, it now takes a combined 2 seconds of damage to ‘level up’ to the next tier of damage instead of 1 second. This means the weapon has significantly more potential but it is more difficult to get it to max power. Also, when hitting a barrier it currently generates ammo instead of consuming it. This means not only is she good at taking down barriers themselves, but she is good at just generating charge off barriers and using that charge to take down enemies as well.

Her alternate fire is still a charge-up large projectile, but it has a bunch of important changes as well. First off, it charges to max charge in 1 second, down from 2 seconds. Next, the projectile speed has increased significantly, currently it has changed from 10 m/s to 30 m/s. Lastly, instead of piercing enemies, it now impacts enemies/environments and explodes, dealing area damage around it. We’ve been heavily iterating on how much damage this ball deals now, but a direct shot has been hovering in the area of 130ish, with a large % of the damage coming from a direct impact (rather then the explosion). 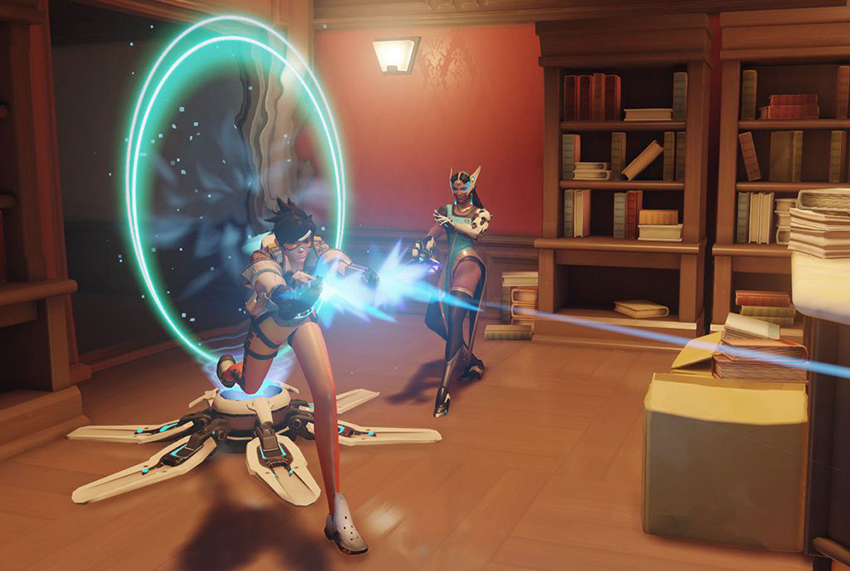 Much like with the most recent rework on Mercy, Symmetra’s ultimate, Teleporter, will now also become a standard ability. Her current second ultimate, Shield Generator is falling away, while Teleporter is getting some crazy changes while her current Photon Barrier ability is being reworked into a new ultimate that sounds even more insane.

The teleporter now works as follows: You place the exit like you normally do, except that you can place it up to 25 meters away, instead of only right in front of you. When you place the exit, the entrance automatically gets built right in front of you instead of at your spawn. It lasts only a short time but allies can use it freely as they normally do, but there are some new things that can teleport as well. We’re experimenting with what works and what doesn’t but currently you can teleport things such as Torbjorn turrets, D.Va’s exploding mech, Junkrat tire, etc. This has lead to some sneaky/fun plays that are really unique to her. It also allows you to get onto high ground on offense with a comp that might otherwise have trouble doing so. The health has been lowered to 300 and the entrance is now attackable as well. If either die, the other is destroyed as well.

Her Photon Barrier has moved to her ultimate and is now very different as well. Instead of placing a moving barrier, she places a static barrier wall that effectively is infinite in size and has 5000 health. She places this wall much like Mei places her Ice Wall, which means you can place it at some range and you can also change the orientation.

This is all fairly early still and we’ve only recently started working on the visuals/animations/sounds etc, so its still a little ways out. I don’t have an ETA on when you guys will get a chance to see and/or play with this but hopefully it wont take too long. It’s actually been super interesting in playtests. There are a lot of different ways to use it and exactly where you place it is super important. You can do stuff like throw it into a fight from spawn like a Hanzo ult, because it spans across entire maps.

Wait… stop the presses. Teleporting in D.Va bombs? That sounds amazing. More than that bit of explosive awesomeness, being able to place the Teleporter from range has potentially huge meta-changing ramifications. A dive comp (a team composition consisting of heroes with high mobility) taking the high ground is a huge advantage in the current meta of the game. Overwatch’s latest hero, Brigitte, was introduced to specifically counter dive comps hitting the backline of supports, but even she can’t do anything about a team with a height advantage. The new Symmetra Teleporter though could negate all of that as she teleports low-mobility characters right into the dive comp team’s faces.

And lets not even begin to consider the potential of a shield with 5000HP (if I recall correctly, D.Va’s bomb only does 1000 damage maximum) that can theoretically span the entire map. How would that even work? How would you deploy it? There are still so many questions, but whatever the answers, this is all already pretty huge.

Or rather, potentially huge as Goodman does stress that “we are still pretty heavily iterating on this stuff so this is all subject to change.” Even so, I can’t help but be excited for what changes may be coming. I started off my Overwatch career as a Symmetra main, but eventually abandoned her as the game’s ever-evolving meta made it too restrictive to play her. Like I mentioned at the beginning, despite what some of the more toxic side of the community would have you believe, she is still viable in specific conditions right now. With these proposed changes though, she could go from risky-pick to must-pick.