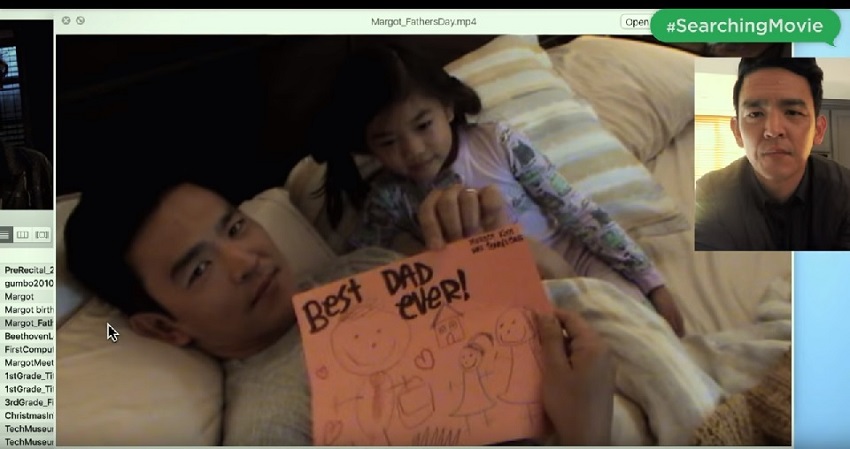 Searching is the upcoming drama/thriller starring John Cho (Star Trek) that’s going to delve deeply into our (over, in my opinion) connected world. He plays the father of a missing teenage girl who, in order to assist the police in their investigation, begins searching through her online profile, activities, and social networks to uncover potential clues about her whereabouts. What he discovers is that what he thought he knew about his daughter, is very different from the truth.

Director Aneesh Chaganty, who’s making his feature debut and also co-wrote the script with Sev Ohanian (My Big Fat Armenian Family), has taken a very different approach to show us how this investigation will unfold. The whole movie will unfold via our socially-connected devices, with the action playing out across webcams and phone cameras – a found-footage movie for the social media age, if you will.

After David Kim (John Cho)’s 16-year-old daughter goes missing, a local investigation is opened and a detective is assigned to the case. But 37 hours later and without a single lead, David decides to search the one place no one has looked yet, where all secrets are kept today: his daughter’s laptop. In a hyper-modern thriller told via the technology devices we use every day to communicate, David must trace his daughter’s digital footprints before she disappears forever.

Searching received very positive reviews following its screening at the Sundance Film Festival earlier this year, earning two awards for the innovative way in which it was filmed. Let’s take a look:

I’m not sold on this. The concept of the movie playing out across webcams, cellphone cameras, and computer screens was a different and intriguing idea, but after seeing the execution of it I’m just not that impressed. It all seems too messy and distracting when watching it play out in the trailer, and while it’d be okay for a 20 minute short – this has a 100 minute runtime and I’m not sure I want to sit through this for that long. I’m also not that impressed by Cho’s performance because his delivery comes across as a touch wooden.

High-concept movies that nail their execution can be very entertaining, take for example the first-person insanity of Hardcore Henry, but in this case I think the filmmakers tried something different (for which they deserve plenty of credit) and didn’t get it quite right.

Searching is due for release in the US on 3 August. It also stars Debra Messing, Michelle La, Joseph Lee, and Sara Sohn.