Few actors are able to slip into a role that looks like it was invented for them. Marvel seems to have a few though. Can you imagine someone else playing Tony Stark? A better Captain America? A more awesome Star Lord?! No, I thought not. Well Marvel certainly managed their magic again in the second season of Daredevil, a great season that also had the madness of the Punisher, played superbly by Jon Bernthal. The role had been played by a few before, but none that managed to capture the nuanced pain the character lives. You can read what I thought of the second season here and note how I swoon over the PTSD’d Punisher. Well the actor sat down with Awards Daily to speak about his potential Emmy-winning role.

I had no idea how committed that fan base is. There’s something with comic books, and the medium requires so much imagination on the part of both the reader and audience. It ignites the imagination and gives the audience this sense of ownership of the characters and of these worlds. I think that’s a reason for the passion…With this character, Frank Castle, I really dived into the comic book. I got a lot from the books and the research process was fun.

One of the reasons I found his version of the Punisher so harrowing was his intensity. Not only during his savage fight scenes, but also when he was utterly vulnerable. I probably couldn’t pull that off as I have frame of reference, something the actor says he needed to draw inspiration on:

I could never have played this part if I weren’t a husband or father. Until you really understand what it’s like to love somebody more than yourself and to willingly give your life for them, only then can you understand what it would mean if they were taken from you.

Indeed, remember that scene in the cemetery? Apparently it’s also Bernthal’s favourite and that’s no surprise, the character was afforded a lot more depth than most of the others (I’m looking at you Elektra).

One of the greatest pieces of cinematography from the season was of course the hospital fight scene, a scene so brutal it left even Old Boy veterans speechless.

I think when you’re talking about characters like these, the way they fight, what’s motivating the fight is very important. Beating someone up to drag them into jail is different than someone who is exercising his rage on people. The Frank Castle you find in this story is not The Punisher. He’s reeling from the loss of his family. He’s driven by rage and is on a singular mission to find these people who took his family from him, and do it as brutally as possible. This team that’s been assembled, they’re unbelievably ambitious. The fighting in this show everybody working together. I also believe the way in which he fights tells you volumes about the character. There’s a story with each and every punch, and they allow us to approach it like that. These guys are good enough to choreograph in that way.

Ain’t that the truth. His fight scenes are completely different to that of Dardevil, each movement almost telling a story of rage and vengeance, like a man completely possessed, totally awesome! You can read the full interview here but for now we need to wait another year before Bernthal returns as The Punisher in his own stand alone series. 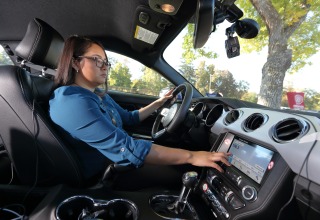 For a decade, car manufacturers have been experimenting with cars suitable for both men …