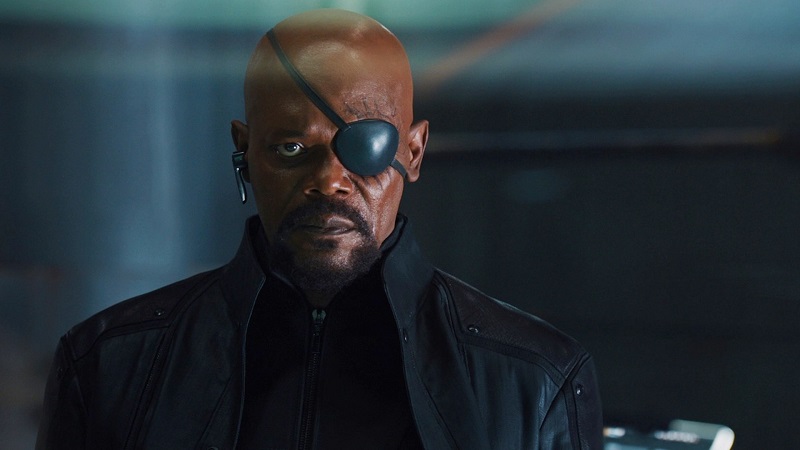 Samuel L Jackson’s Nick Fury was the binding element that bought the world’ best superheroes together in Marvel’s Cinematic Universe. However, since the events of the excellent Captain America: The Winter Solider, Nick Fury has gone into hiding and has only appeared in brief cameo appearances in the last two Avengers films. That last line might surprise people who didn’t stay for the end credits scenes at the end of Avengers; Infinity War, but then who doesn’t stay till the end by now? You know something is coming.

(Possible spoilers for Avengers: Infinity War and Spider-Man: Far From Home, coming up)

However, despite Nick Fury and his counterpart Cobie Smulders’ Maria Hill coming to their demise at the end of that movie, it appears Marvel still has big plans for Nick Fury in the rest of the MCU. First up, Fury is going to playing a major role I the forthcoming Captain Marvel which is set in the 80’s and which will introduce Nick Fury to Carol Danvers and provide the source for what inspires Fury to go and form the super-hero team up.

That is not all. While he will likely appear in the fourth Avengers movie as well, nothing is confirmed in this regard given the status of his character at the end of the third movie. However, one movie which looks to also be getting an appearance from Fury is  the sequel to the successful Spider-Man: Homecoming. Firstly, Vulture reported earlier in the month that Samuel L. Jackson and Cobie Smulders have both been added to the cast of the next Spider-Man sequel and now Jackson has posted a photo on Instagram that seems to all but confirm his appearance in this sequel.

Back in the box!! Let the games begin.#whatittakestogetyachty

This picture is a little cryptic, though based on the artificial facial hair on the left of the picture, it could certainly represent the character of Nick Fury. However the real giveaway here is the location of where the photo was shot, which is close to where Tom Holland has been spotted shooting films for the next Spider-Man film, which we already know is going to be set in England.

Now some might look at this as a major plot-spoiler given that these characters all died at the end of Infinity War, but given that a Spider-Man sequel was already announced, we shouldn’t be too surprised that more characters will survive whatever undoes the snap of Thanos. What I find more interesting is that while that fourth Avengers film is going to herald an end of an era for many of the existing Marvel actors and heroes like Robert Downey Jr.’s Tony Star or Chris Evans’ Steve Rogers, it appears Jackson is still interested in playing the role of Fury beyond these phase of Marvel films.

Obviously though, you could also read even more into this by saying that seeing as we know Downey Jr is unlikely to feature in future Marvel films, it could be that Stark is either killed off or withdrawn in some way and Fury now needs to step up and play a mentor role for the young webbed her who has a tendency to go off and do stupid things.

The future of the MCU is definitely going to be an interesting one after the next epic Avengers film, but I wouldn’t be surprised if we once again see Nick Fury play the catalyst who starts bringing the characters from the different movies together again for whatever other epic adventures Marvel has in store for the future. Hopefully, something featuring the X-Men and Fantastic Four.