WARNING: THIS ARTICLE CONTAINS HUGE SPOILERS FOR THE END OF SOLO: A STAR WARS STORY! SERIOUSLY, THIS IS A HUGE SPOILER WARNING!

Almost everybody agrees that Star Wars: Episode 1 – A Phantom Menace is not a good film. But despite all the wooden child-acting, the eye-rolling dialogue, the boring Trade Federation blockade nonsense, and, of course, Jar Jar Binks, everybody also agrees that the movie gave us one of the coolest characters the franchise has ever had in Darth Maul. And then killed him.

It was one of the most iconic scenes in Star Wars history as Ewan McGregor’s young Obi-Wan Kenobi, having just witnessed the horned Darth Maul using his signature double-bladed lightsaber to skewer Qui-Gon Jin, avenged his master by bisecting the Sith in half, sending the two pieces of his body to fall down a shaft. And that’s where Maul’s story ended.

Which is why it probably came as quite the surprise for many audience members when at the end of Solo: A Star Wars Story – a film set roughly 10-years after the events of Phantom Menace – young Han Solo’s erstwhile squeeze Qi’Ra betrays him so that she can climb to the upper ranks of the Crimson Dawn criminal organization, reporting her recent ascension to her new boss: Darth Maul. Looking very much in one piece, double-bladed lightsaber in hand, Maul summoned Qi’Ra to his home planet of Dathomir, clearly setting up a future film encounter between him and Han. But just how can Maul be alive? Continuity error? Lucasfilm trying to completely erase the stink of Phantom Menace? Actually, it all makes perfect sense… if you get your Star Wars kicks from more than just the movies.

In the fourth season of Star Wars animated series Clone Wars – which is set between the events of Episode 1 and Episode 2 – it gets revealed that Maul had actually survived his fight with Obi-Wan against all odds. Thanks to the lightsaber’s blade instantly cauterizing his bisected torso, all his vital upper body organs stayed where they were supposed to be, and using the Force, the Sith apprentice managed to pull his half a body into a garbage chute, which leads to him being dumped onto the trash planet of Lotho Minor. There, fueled by both the Force and his hatred for Obi-Wan, Maul manages to survive in the detritus by striking a bargain for assistance with a local sentient snake-like creature and living off local vermin. He even constructs a six-legged insect-like cybernetic lower half for his body out of scrap so that he can move around. 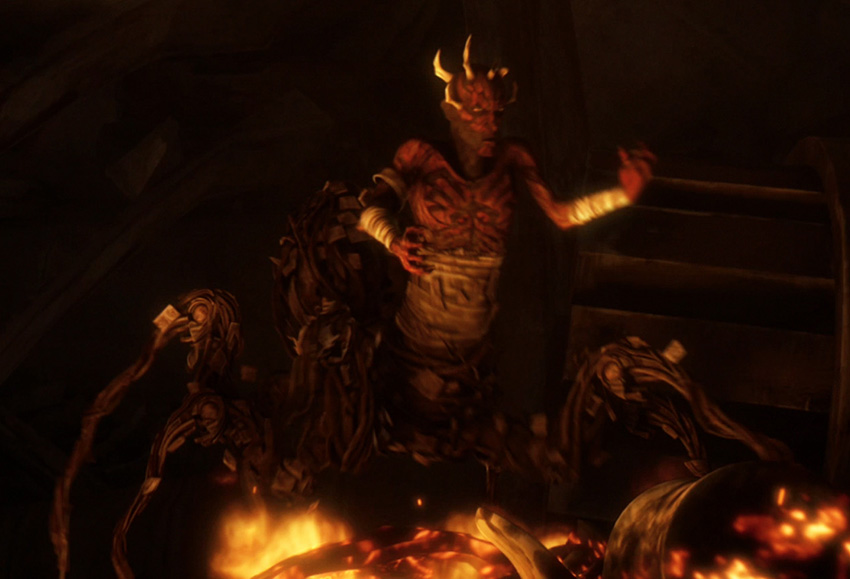 Maul would eke out a living on Lotho Minor for years, his condition and obsession with getting revenge on Obi-Wan eventually driving him insane. He would even renounce his former Sith masters and drop the Darth part of his name. Eventually, Maul’s brother, Savage Opress, at the behest of the Force-witches of Dathomir, would track him down and take him back home where he was healed mentally (well, at least enough to be lucid) and given a new pair of humanoid cybernetic legs.

Maul takes on Savage as his own apprentice and the two begin a secret mission to wipe out both the Sith and the Jedi. To achieve this, Maul partners up with a group of Mandalorian terrorists and builds up a coalition of criminal organizations called Shadow Collective. Using his new resources, Maul emerges from hiding and comes into conflict with both the Sith and Jedi – his specific hatred for Obi-Wan continues, and the pair would come close to killing each other in a number of cases. 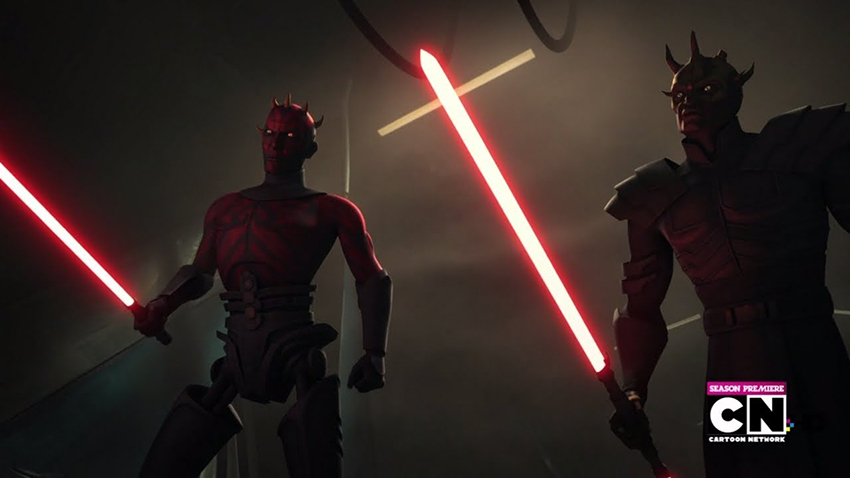 Maul also managed to orchestrate a civil war on the planet Mandalore as a way of luring out Obi-Wan; during a mission many years before, Obi-Wan had protected the pacifist Mandalorian leader, Duchess Satine Kryze, and the pair developed feelings for each other. Maul manages to claim the Mandalorian throne himself for a time, but Obi-Wan would stop him – unfortunately, not before Maul killed Satine in front of him and then escaped.

After building up Shadow Collective during several tussles with the Sith, Maul would return to Mandalore but would get stopped by former Jedi Padawan Ahsoka Tano and escape once more, his group in tatters. It would be years again before he would turn up during the time of the second season of Star Wars Rebels, seemingly living as a vagabond on Malachor, a planet home to an ancient Sith temple. He would go on to tempt young Jedi Ezra Bridger to the Dark Side several times and come into conflict with the rest of his crew. His efforts would eventually lead him to track down an old Obi-Wan on Tatooine where the pair would engage in a duel for the ages. In the end though, Obi-Wan would be the only one left standing, his longtime foe finally dead at his feet.

So where does his appearance on Solo fit in? Based on the timeline, Disney has cleverly brought Maul back in the years between his second escape from Mandalor and his eventual appearance on Malachor (you can see he has his cybernetic legs and the saber he would eventually use in Rebels). What he got up to in that time, how he went from criminal overlord to living on his own in Sith ruins – all of that is untapped story at this point in time. This allows Disney to bring back one of the franchise’s most beloved villains without messing up continuity and gives any future Solo movies a baddie that audiences will definitely show up for. They even have martial artist/stuntman Ray Park reprising the role he originally played in Phantom Menace, but Sam Witwer, who voiced him in the animated series, does all his dialogue in Solo.

Another important thing to mention: Several of the live-action movies had connections to Clone Wars and Rebels previously but as mere blink-and-you-miss-it Easter eggs. This is the first time a character from either show was used this outright, legitimizing them as canon. This opens the way for more animated characters to make that transition. Ahsoka, Ezra, even Grand Admiral Thrawn – the precedent has now been set and I hope Disney follows through on some of them.