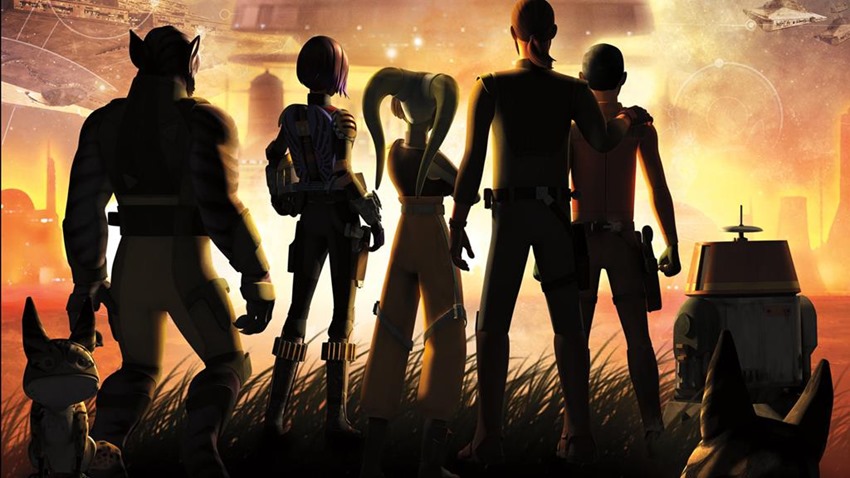 Four seasons, 75 episodes and over three years. That’s just how massive Star Wars Rebels was, as Disney’s latest series bridged a massive gap between the prequel and old trilogies. Set 15 years after the Jedi had fallen and Darth Sidious had risen to power, Rebels was a show that was somehow managed to expertly balance light humour with heavy consequences, building a new mythology along the way and paving the way for the film events that were yet to come. Here’s a look, at ten of the most essential episodes to watch from the entire magnificent run of the series.

Spoilers below, be warned yes?

Rise of the old masters 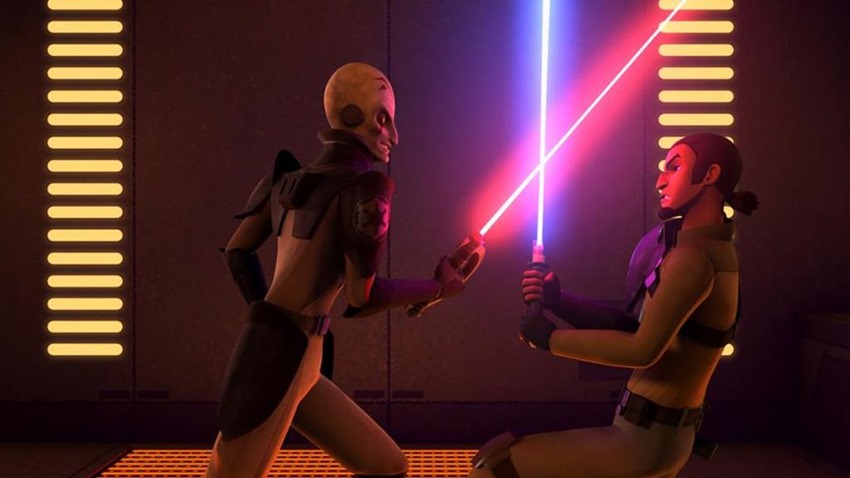 While Rebels was off to a fine start with its two-part pilot, it was only by the fifth episode that all the pieces began to finally click into place. With his past as a Jedi revealed and facing uncertainties over his ability to train Ezra Bridger in the ways of the Force, Kanan Jarrus thought himself unworthy to pass on the lessons of an age that was long past.

Falling into a trap set by the Grand Inquisitor as he believed that he might have found a true Jedi Knight to teach Ezra, Rise of The Old Masters isn’t just a gripping run for survival when the Grand Inquisitor springs his trap however, it’s also a darker episode that revealed that the Empire wasn’t above resorting to even dirtier methods to ensuring that the Jedi were purged from the galaxy. 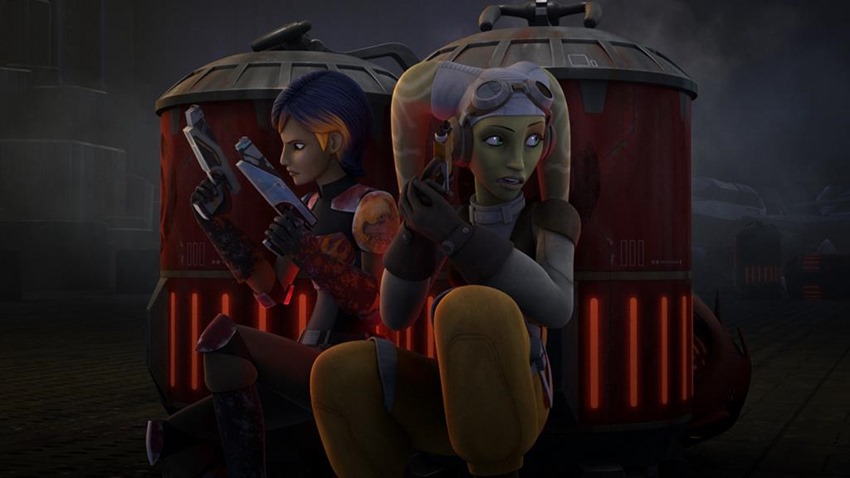 Star Wars is always more fascinating to watch when you remove the Jedi and the Sith from the equation. After all, how well do the people caught in the middle function when they don’t have the Force to aid them and have to rely on clumsier blasters rather than more elegant lightsabers from a more civilised age?

In the case of Sabine Wren and Hera Syndullah, not very well when the pair find themselves stranded on a deserted base that happens to be teeming with deadly and hungry creatures. It’s an odd couple episode of the highest order as they work to overcome their differences, but the final push to avoid ending up as a snack for cosmic horrors results in some incredible action and teamwork between the two that showed off the kind of strength that the beloved characters became known for.

Fire across the galaxy 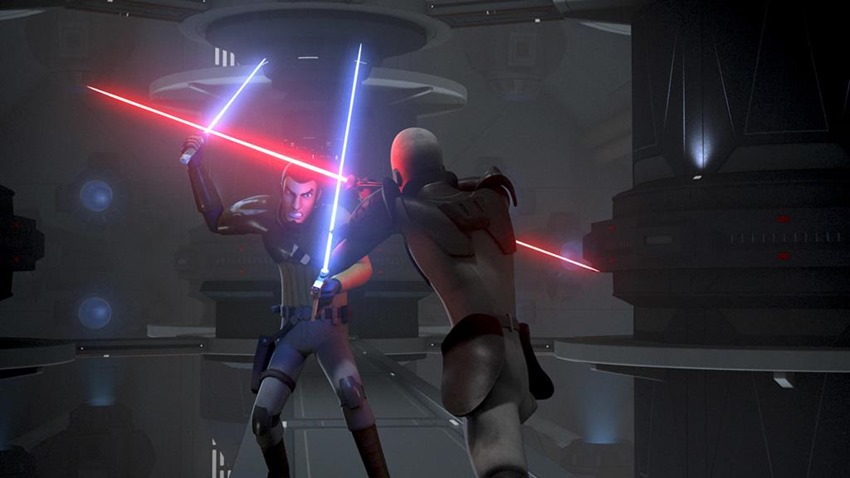 After 14 episodes, Star Wars Rebels had more than proven itself to be a worthy successor to the path that The Clone Wars had blazed before it. All the seeds planted in the season began to bloom, as the Grand Inquisitor found himself facing Kanan and Ezra one last time in a climactic battle that left everyone scarred. Everyone had a moment to shine, while the stage was set for a future that featured not only Darth Vader on the hunt but also the return of fan favourite character Ahsoka Tano as the gap between the prequel and old trilogies were finally closed.

The siege of Lothal 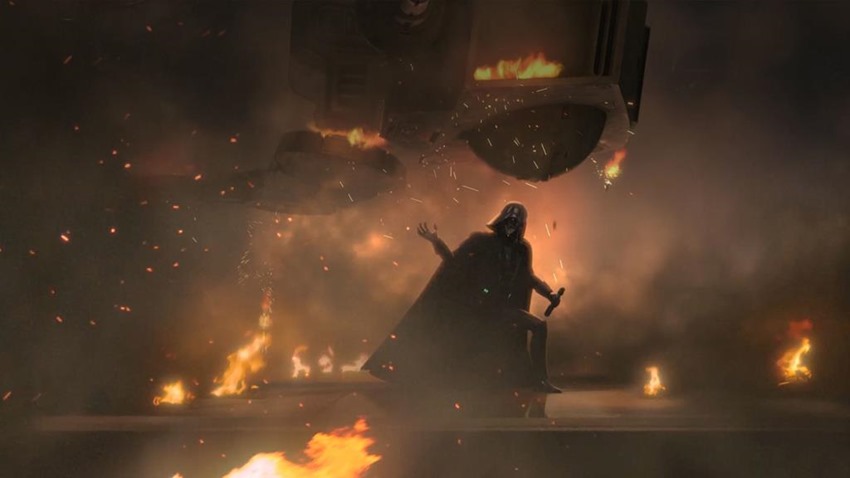 If you thought the Grand Inquisitor was relentless in his pursuit of the remaining Jedi, then Star Wars Rebels had a surprise up its sleeve. While he was used sparingly in season 2, Darth Vader’s appearance sent a signal to the crew of the Ghost: The Empire was taking off its kids gloves. Vader was an opponent who couldn’t be beaten, merely delayed as the planet of Lothal began to pay a heavy price for its numerous rebellions.

While Rebels may have been at home on Lothal, it was Vader’s ruthless aggression that resulted in the crew ditching the planet in a desperate attempt to avoid the unstoppable Sith Lord before it was too late.

Twilight of the apprentice 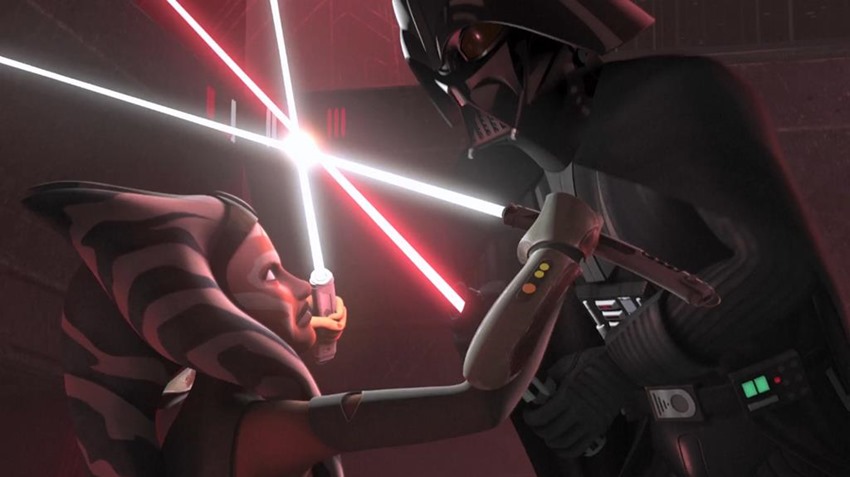 Season one may have had a blockbuster finale, but season two of Rebels blew even that episode out of the water with its Jedi and Sith-centric tale. With every major Force-wielder assembled and Darth Maul revealing that he had survived into the new Galactic Empire era, a showdown was inevitable. After all, there’s a reason why Ahsoka Tano isn’t present in the old trilogy, right?

Twilight of the Apprentice answered that question with a battle that took a hellish toll on anyone who participated in it. The Sith order of Inquisitors met their end when the Seventh Sister and the Eight Brother fell in battle, Ezra edged closer to the dark side of the Force and Kanan sacrificed his vision to save his apprentice. It was the final confrontation between Vader and Tano that hit fans the hardest however, as the former Jedi appeared to finally meet her fate, setting up a dark new direction for Rebels to explore in its third season.

Legends of the Lasat 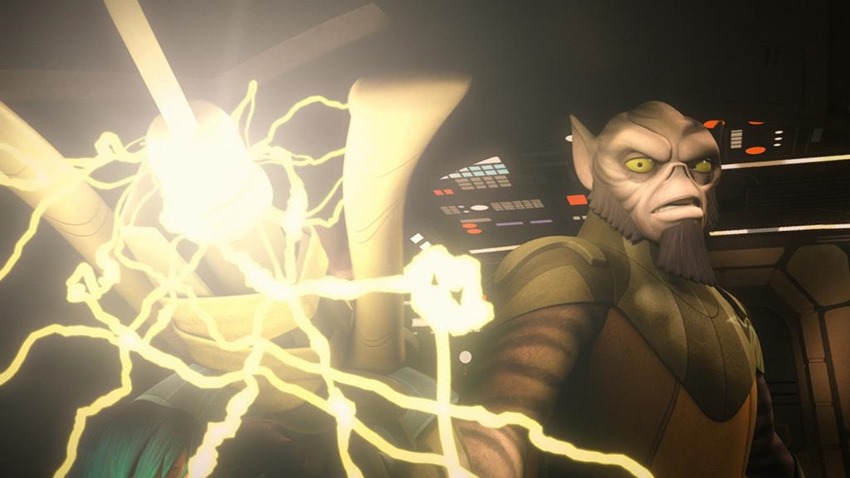 For an all-encompassing field of energy that permeates the entire universe, the Force happens to have a very binary doctrine attached to it. Most of the time, you either subscribed to what the Jedi or the Sith were selling. What of other cultures though? What of species whose belief in the Force predated that of the Jedi and still continued to exist?

Legends of the Lasat is a fantastic examination of how the Force is perceived by other cultures, while also giving Zeb a much-needed moment to shine. This time, it wasn’t a warrior who was needed to save the day, but rather a believer who could light the way in one of the most visually impressive sequences of the entire series. Finally, Zeb’s mission was clear. He wasn’t fighting for revenge on a species that he believed had been wiped out.

He was fighting to preserve a culture that had managed to survive.

Trials of the Darksaber 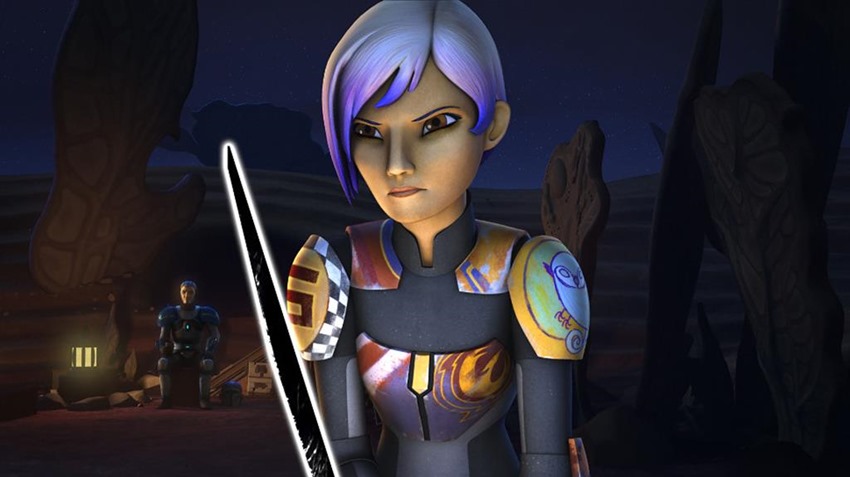 Season 3 had no shortage of fantastic standalone episodes, especially with the reveal that Grand Admiral Thrawn had been folded into the new continuity of Star Wars. Much like previous episodes had done for the rest of the crew of the Ghost however, it was time for Sabine Wren to shine. Wrestling not only with her past but also her legacy as a Mandalorian and the exile that she endured, Sabine was back and ready to take responsibility for her actions and find some sense of closure.

Armed with a mythical relic of the Clone Wars, Trials of the Darksaber was an episode about balance. It was an adventure in finding the middle ground between family of the blood and bonds forged in battle, of letting go of the past and looking to the future as Sabine emerged stronger than ever from the challenges that she overcame. 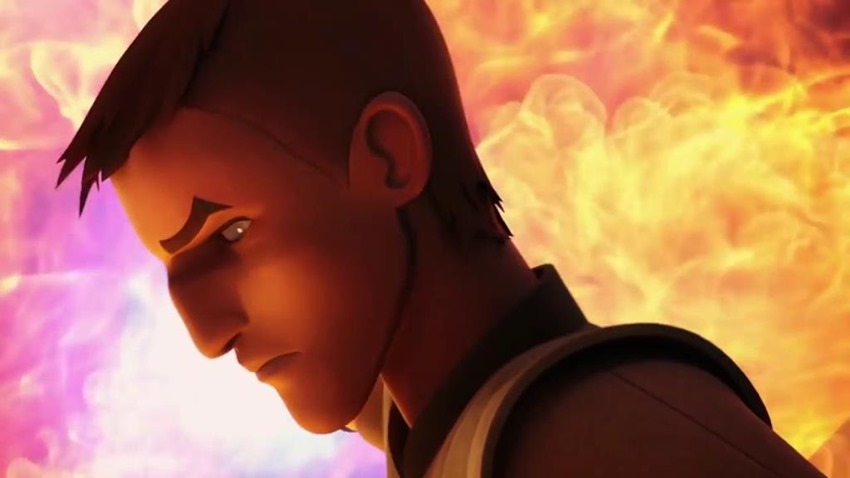 We all knew that the end was coming for Kanan Jarrus. And yet, nothing could prepare us for that final moment, when the Jedi sacrificed everything to save those he loved. On the surface, Jedi Knight plays like a typical episode of Rebels: The odds are stacked against the team, the consequences are dire and overcoming overwhelming opposition required creativity and a more subtle approach.

Everything seemed to be going according to script, until a fateful blast from an Imperial mech found its mark. With both sides of the war between the Galactic Empire and the Rebel Alliance hurting, the stakes were higher than ever before as the future of Lothal hung in the balance. Only this time, the Rebels would be short a Jedi Knight for the final fight. 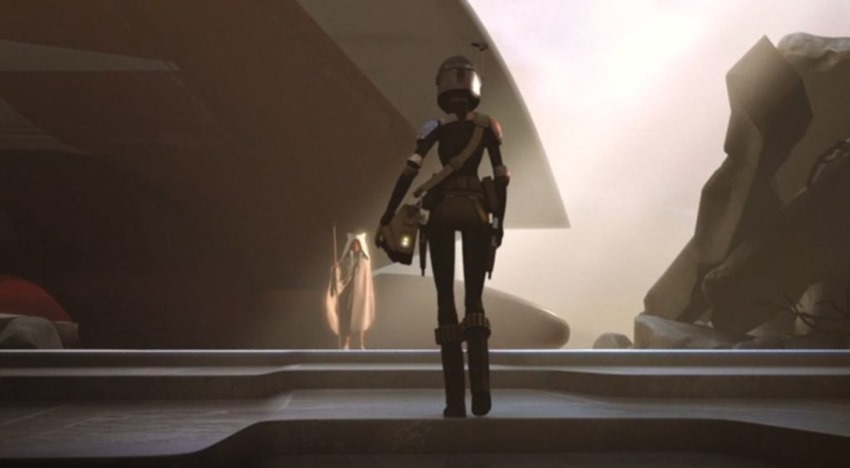 And what a series ending it was. Rebels ended with a certain sense of finality, as Ezra played a dangerous game of misdirection and called in the unlikeliest allies for his showdown with Grand Admiral Thrawn. By the time the dust had settled, the Empire had finally been driven off of Lothal, Thrawn and Ezra were lost to the Unknown Regions and the rest of the Ghosts found that the day had finally been saved.

What Rebels proved in this final pair of episodes, was that the galaxy was far, far bigger than just the Jedi, the Sith and the factions waring between them. Lothal was a small victory, but a victory nonetheless as this tiny slice of the cosmos could finally breathe easy. With or without the Jedi, Star Wars would still continue to be as loose threads were finally wrapped up and the episode ended with Sabine joining Ahsoka Tano to start the hunt for Ezra.

Maybe it’s fitting then, that Rebels ended with two of its best characters from different eras joining forces to bid farewell to a series of adventures that happened long, long ago in a galaxy far, far away. 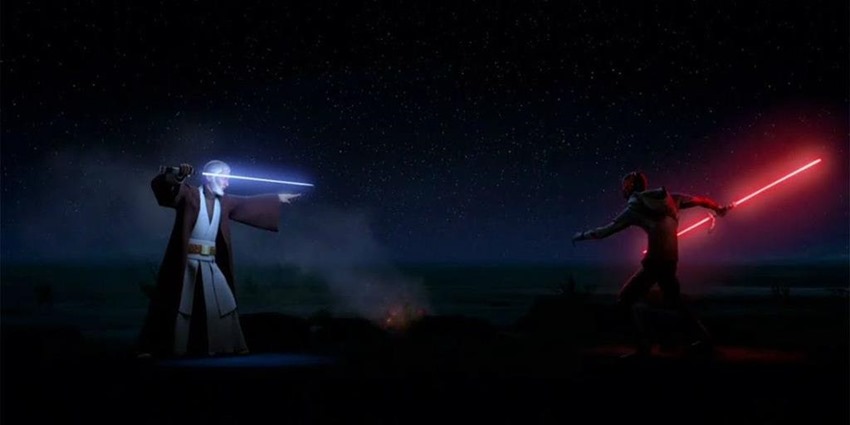 You want to know something amazing about this episode? It’s that it’s the best three minutes of Star Wars that you’ll ever watch. While the setup for Twin Suns sees Ezra used as bait for Darth Maul to finally settle his score with Obi-Wan Kenobi, it’s the build-up to that ultimate battle that resonates so brilliantly. What began with a climactic battle on Naboo so many years ago ends with a decisive and sad victory for Kenobi as the prequel trilogy finally finds a fitting end on the cold sand of Tattooine.

So much is said with so little. Every slash of the lightsaber, every posture taken and every word spoken reveals volumes about the personal history of two of the biggest icons in the franchise, before it all tragically ends. A masterpiece of pacing, cinematography and tight sound design, Twin Suns is an incredible moment in Star Wars history that doesn’t just stand shoulder to shoulder with similar moments… it towers above them as the benchmark moment for the entire saga.