Leigh Whannel’s directing career was off to something of a middling start. Though already having proven a more than savvy storyteller, whatever potential he might have shown was hampered by the weight of a depreciating franchise in his Insidious: Chapter 3 debut. The writer/director seemed somewhat trapped in the bubble he helped create back when he first penned The Conjuring and established modern Horror’s only major film universe with the spree of films to follow. But free of those shackles and further backed by his longtime partners in Blumhouse productions, Whannel has upended expectations with his latest Sci-Fi Action frenzy. It wears its influences unashamedly upon its sleeve, but Upgrade is still a sharp and striking blend of familiar 80s super-soldier tropes with witty writing, a sense of humor and just about the right amount of exploding heads. 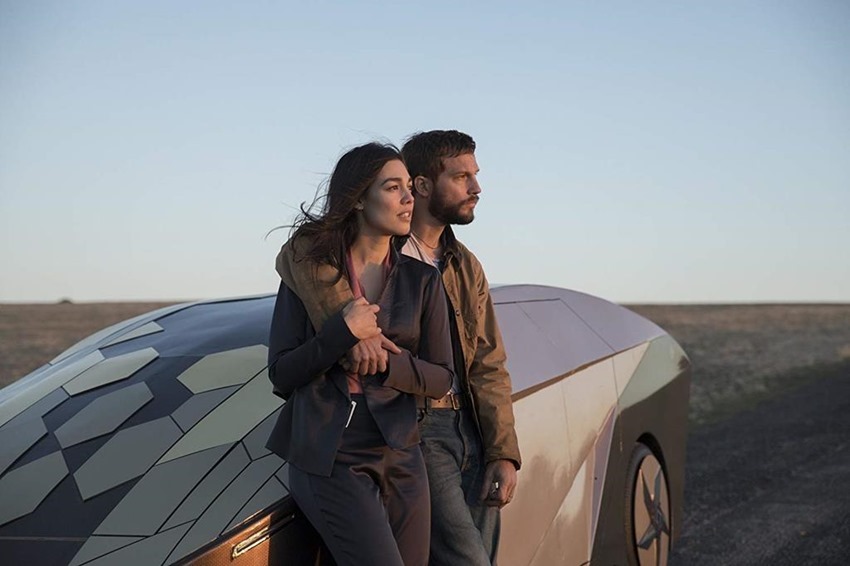 After an attack, Grey Trace is left quadriplegic. He’s thrust into a deep depression. Any hope of results out of the investigating officers are dashed and he quickly loses hope. It’s a familiar start pulled off with style that lends credence to the bloodshed to follow. He is introduced to STEM: a microchip implanted into the spinal cord to work in service of Trace’s brain and grant him control over his body once again. Grey reluctantly accepts and all is at first well with his new lease on life. This is, happily, short lived. STEM early on reveals its true nature – that of an independent AI – talking to Grey in a voice none but him can hear and serving as an internal supercomputer/combustion-engine.

Needless to say, STEM and Trace is a recipe for carnage as they tear through dive bar and cyborg mercenary alike in search of justice for the attack. He shares a symbiotic relationship with the chip in his spine and the two works together well – plugging each other’s shortcomings as both human and AI respectively to form something of a super-human. The computer’s advanced combat abilities give Trace an edge he doesn’t expect and STEM’s ruthless nature leads to some real brutality – much to Grey’s dismay. 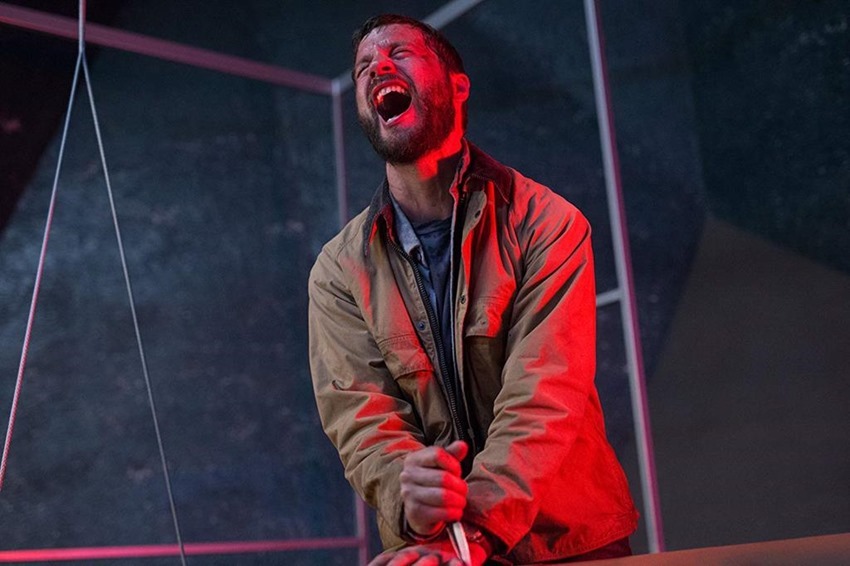 Though Upgrade arguably could have gone further in terms of making room for more action, what is there is incredibly satisfying and creative. It’s a primarily practical effects driven affair and there are a few moments of true cinematic nastiness that serve as real highlights. Grey’s alarm at STEM’s cold-hearted effectiveness as his own limbs act beyond his control to perform acts of self-defense he could only imagine brings  an eccentric edge to the fight scenes. They are bolstered by impactful choreography and clever cinematography. The stilted, robotic camera stylings that occasionally show up compliment STEM’s machine-like movements and the visuals are equally impressive in their natural state.

The aesthetic competency stands strong throughout the film too. Upgrade crafts what comes across as a surprisingly believable near-future vision that only falls short in its one or two attempts to reach for the absurd. Mankind shares a realistic synchronicity with computer technology and how this applies to the conveniences of daily life as well as the establishment of a total surveillance-state is dark stuff. Even better are the cybernetically modified killers that Trace and STEM wage war with. Armed with shotguns internally implanted into their arms, and a slew of other gadgets, they make a formidable foe. They may lack any real characterization, but their enthusiastic performances and prior crimes ensure they’re satisfying to see taken down one-by-one. 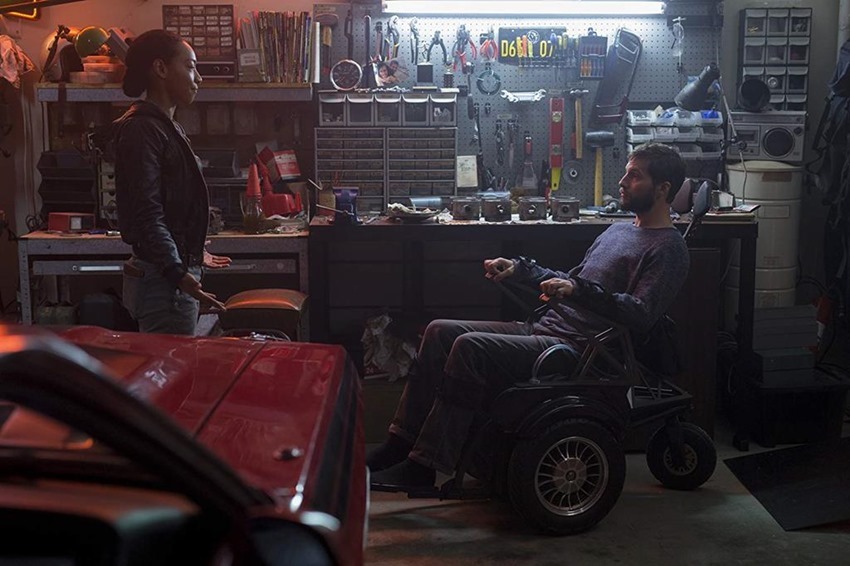 Unfortunately, this lack of characterization applies to most of the cast. The cryptic young engineer that gifts Trace with STEM is more an archetype than fleshed out villain. The same goes for the aforementioned killers and – more egregiously – the detective investigating both Trace’s case and the mounting pile of bodies he leaves behind. Her unknowing involvement in a conspiracy far bigger than her could have made her an infinitely more compelling character than the simple thorn in Grey’s side she ultimately is.

Luckily then, Logan Marshall-Green (of 24 and Prometheus fame) is more or less the ideal front man for this type of film. The way he appears out of place in such an advanced world and pokes fun at the strangeness of the technology around him makes him likeable, while the way his attitude changes as he adapts to the advantages of STEM is an interesting descent. The physicality of the role cannot be understated either. Trace gazing on in horror as STEM ends the lives of their foes in seconds using whatever he can grab onto into is marvellously morbid, while Mr. Marshall-Green is clearing give his all in every engagement. He is also the film’s main source of humour and, while not every leap lands, the light-hearted spin in some areas is appreciated. 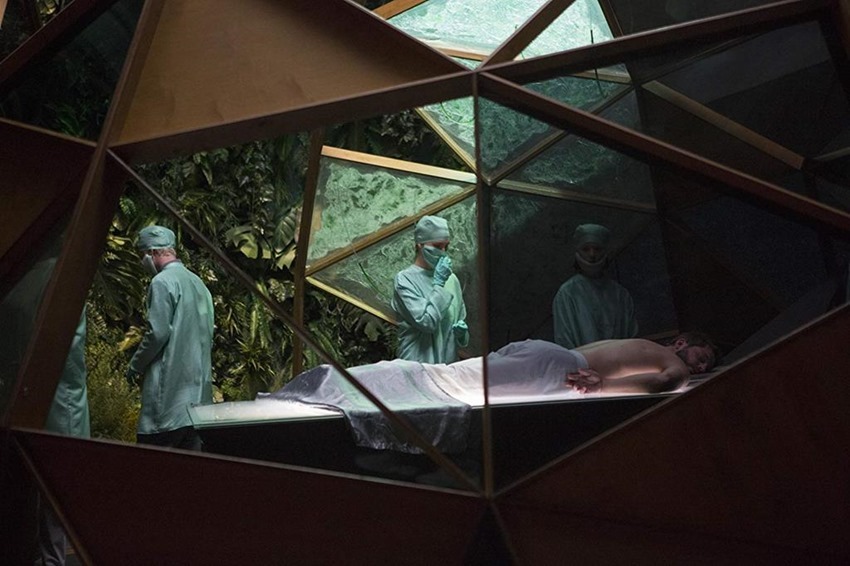 The script is dense enough where it counts then. The interplay between Trace and the enigmatic voice in his head is perhaps the single most thrilling element of Upgrade. This strong core – ran through a series of twists and turns both predictable and less so – backed up by the loss Trace suffers and the bitter-sweet nature of its final moments equates to a satisfying package overall.

Science-Fiction cinema is in a funny place right now. New hits are few and far between, while the heights of the box office is generally reserved for the most universal of IP – think Star Wars and anything with a Marvel logo attached – with even the latest Blade Runner struggling to break even. High-concept Sci-Fi is thusly left to the independent film world as audiences rapidly move on. Rarer still then is the occasional studio-backed film that recalls a different side of the genre: one with considerably more one-liners and exploding squibs. Blumhouse’s Upgrade is one such film. The result is a slick and violent Robocop-on-a-budget that brings modern sensibility and intelligence to an old-school formula in the best possible way.