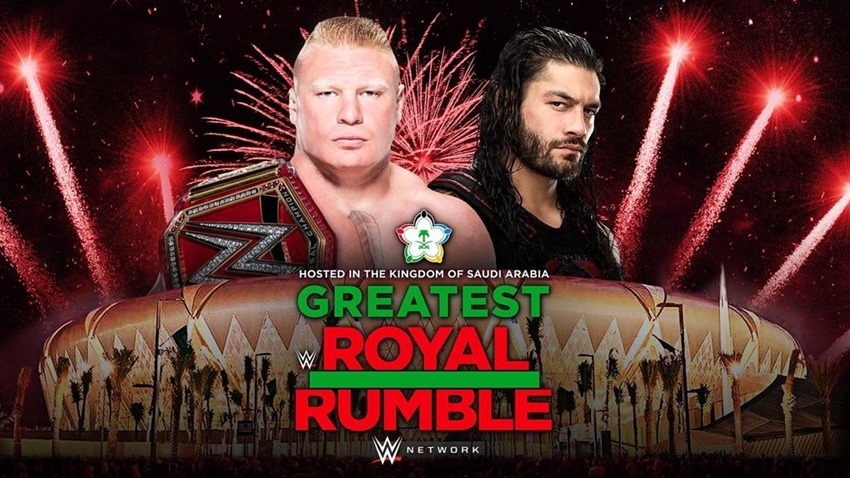 There’s only one Royal Rumble held every year, but there’s only going to be one over the top rope event that can truly be called “The Greatest”. It’s fifty of the greatest WWE superstars, all colliding in the ring looking for fame, glory and the eternal title of being the first winner of the biggest Royal Rumble ever seen in this reality.

But that’s not the only match going down! There’s plenty of action to watch, featuring everyone from The Undertaker to Triple H as the WWE rolls into Saudi Arabia. Taking place from the King Abdullah International Stadium in Jeddah, Saudi Arabia, here’s who won and who lost at one of the most monumental WWE events of 2018. 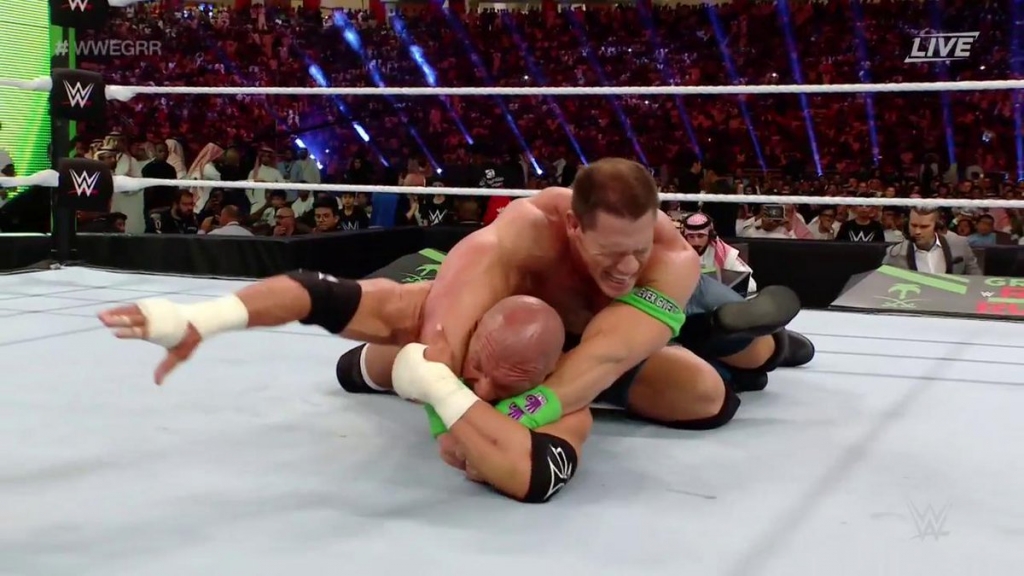 Eight years. That’s just how long it has been since Triple H and John Cena faced off in the same ring, as the two fought to a stalemate that ended with neither man being declared the victor back then thanks to the interference of Sheamus. A lot has changed since then, but the rivalry between the two legends burned hotter than ever at The Greatest Royal Rumble as only one man could have his hand raised by the time the final bell was struck.

That man, was John Cena

In a battle for the ages, got the final word when the found its mark. Two former world champions put everything on the line, but in the end the cerebral assassin feel to the Cenation Leader when a second Attitude Adjustment found it’s mark. Eight years later, and Triple H still can’t see Cena. 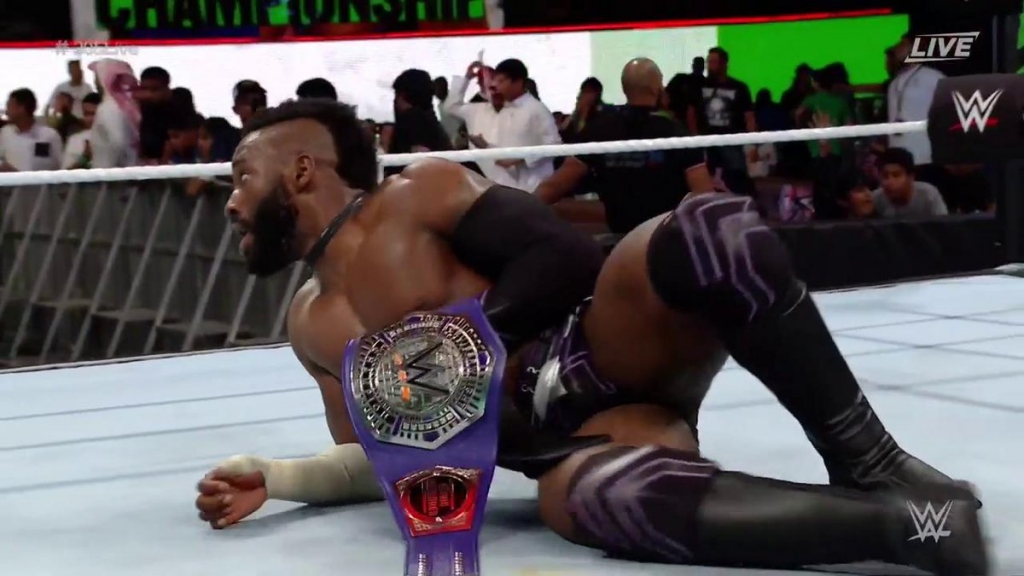 High risk, high reward as the following bout on the card brought out the cream of the cruiserweight crop. Reigning champion Cedric Alexander had his hands full with the legendary luchador Kalisto, as the two top-rope technicians battled tooth and nail to be crowned king of their division. With a Lumbar Check that has never failed him, Alexander retained his title as cruiserweight champion. 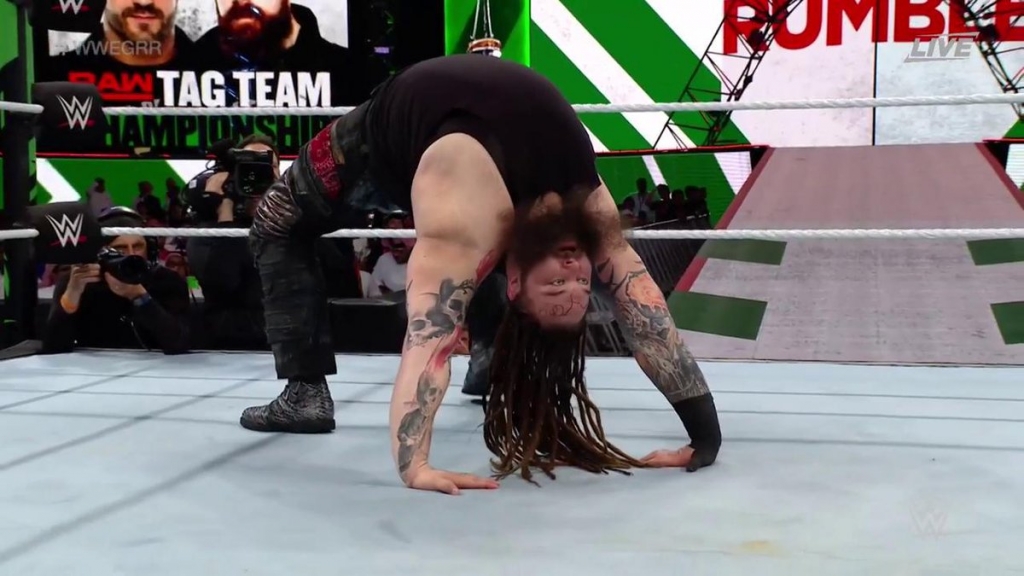 Braun Strowman may have claimed gold at Wrestlemania when he dethroned Sheamus and Cesaro, but his impromptu partner Nicholas for the night wasn’t exactly ready to help him defend the WWE RAW tag team titles on account of the fact that he still had classes to attend. Also, seeing The Bar take on a kid might be one-sided.

What was there left to do? Begin a new tag team tournament of course, as RAW’s top teams battled for a chance to be crowned the best in their division. After numerous matches, two teams were left: Cesaro and Sheamus, and Matt Hardy and Bray Wyatt whose unlikely alliance had forged the pair into a squad that called itself The Deleters of Worlds.

Delete they did, as even the seasoned team of Cesaro and Sheamus were no match for the bizarre antics of Bray and Hardy’s woken wisdom. A result that you could call…WONDERFUL! 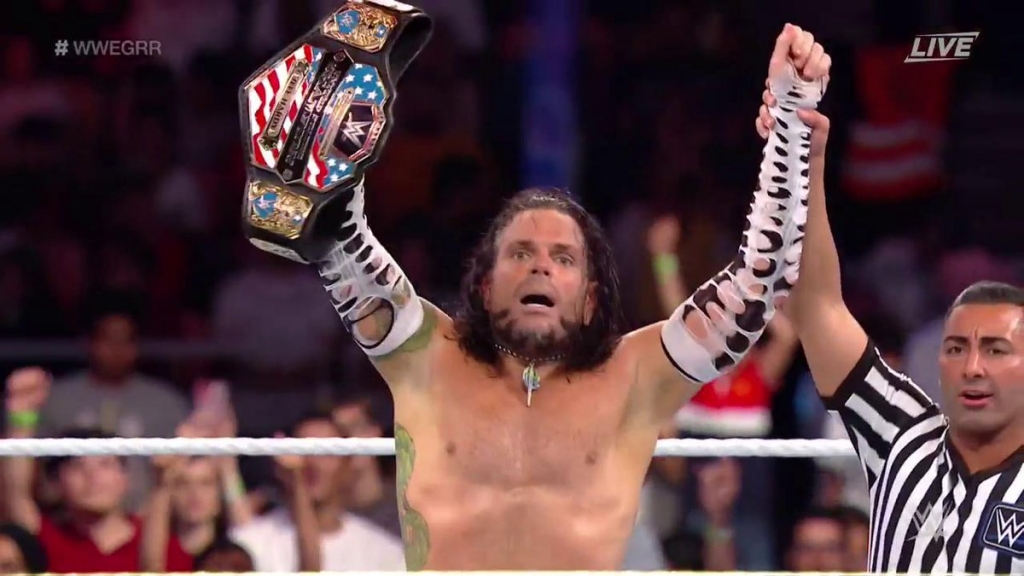 Barely a day after he was crowned the new United States Champion at Wrestlemania, Jinder Mahal’s reign came to an end the following night on RAW when the charismatic enigma known as Jeff Hardy returned to action. With each man seperated by the borders of RAW and Smackdown LIVE, only one of them could lay claim to the United States championship.

Having already proven that he was willing to go to any dirty lengths to counter Hardy’s extreme offense, Mahal’s tactics were tricky and intent on keeping the risk-taking champ grounded. But the modern-day Maharaja’s calculated game plan fell short, as Hardy found the perfect moment to drop his signature Swanton Bomb on the challenger and retain his title. Look’s like Mahal is returning to RAW empty-handed. 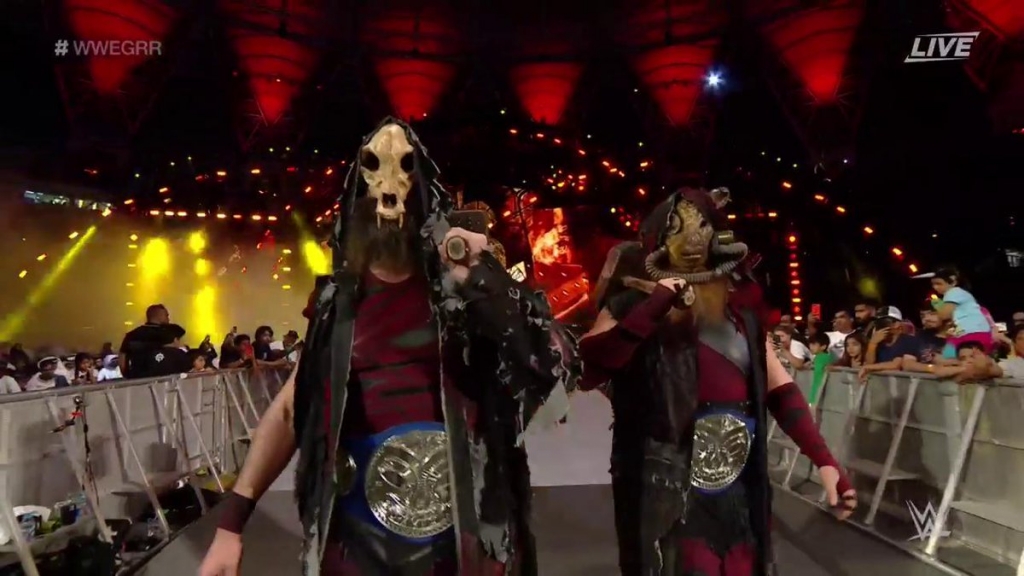 A tale as old as time: A new hot tag team appears, runs rampant and eventually acquires the throne of its competition with a little in-ring regicide. That’s a narrative that not even The Usos were able to escape, as their run as Smackdown LIVE tag team champions didn’t just come to a halt: It was hammered out of them by the Bludgeon Bros.

Rowan and Harper made a splash after their separation from the Wyatt family, with the dangerous duo looking more than ready to use their overwhelming power to secure another victory. Try as they might,The Usos just couldn’t overcome the irresistable force of the Bludgeon Bros. as their tactics and agility amounted for nothing when the reigning champs retained their titles after a hard-fought battle. 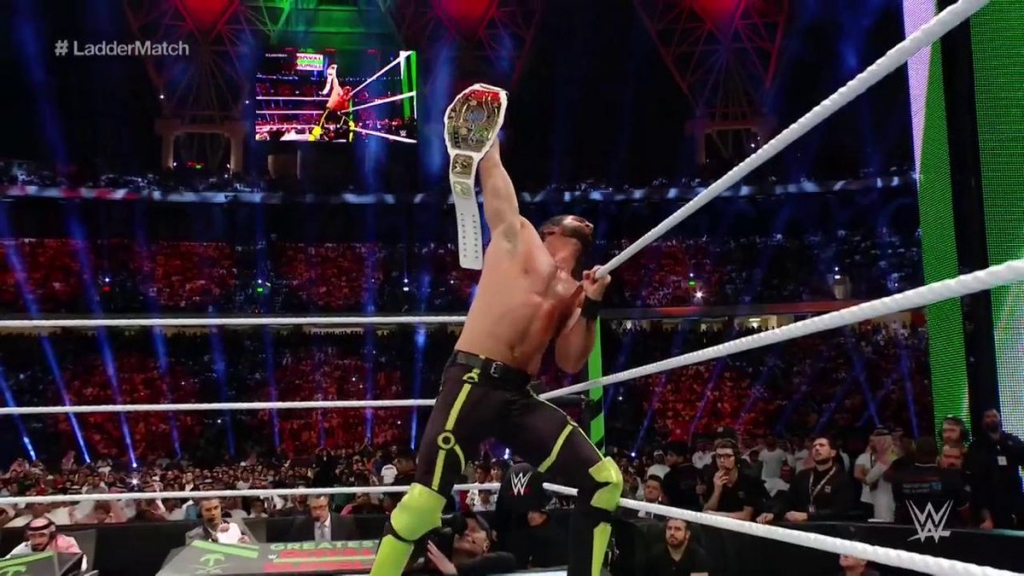 For months, The Miz has proclaimed himself the single most important person to ever hold the Intercontinental Championship. Well, until Seth Rollins claimed it from him and begun a new reign as the IC champ, leaving the A-Lister with neither a Miztourage, championship or even a home on RAW. As hungry as The Miz is to reclaim his iconic championship however, he had some stiff competition ahead of him.

Samoa Joe and Finn Balor were also closing in on the gold, with all four men ready to brutalise one another in a ladder match to grab the white strap. In a bout that shaved years off of each other’s in-ring careers, it was Seth Rollins who climbed the ladder and grabbed the prize right out from under Finn Balor at the eleventh hour. Monday Night Rollins continues! 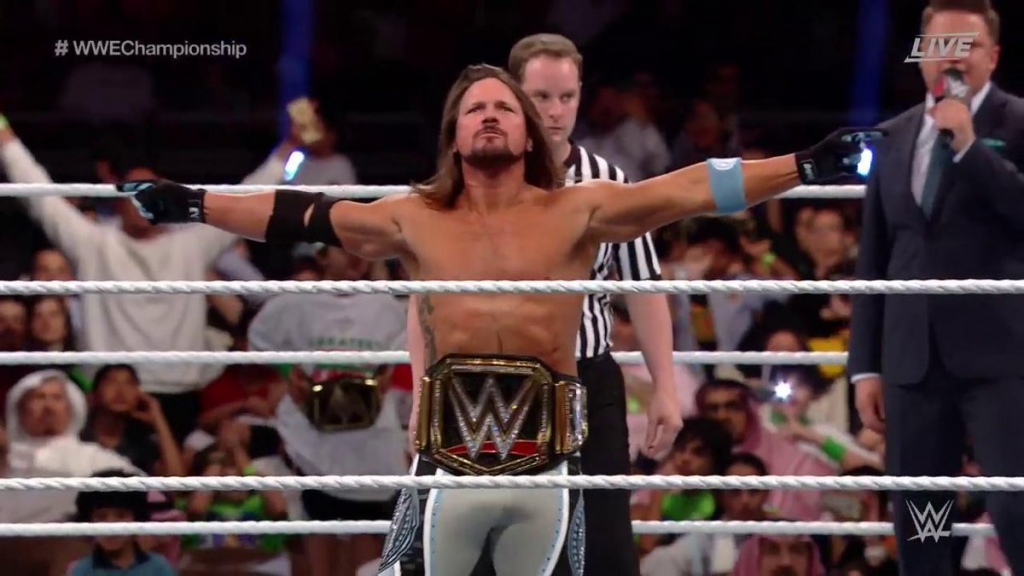 Funny thing about a dream match? It can quickly become a nightmare, as WWE Champion AJ Styles learnt after his titanic clash with Shinsuke Nakamura at Wrestlemania. Styles may have retained his title as WWE Champion, but Nakamura had the last word with a crotch shot that would see several sequels launched at the champ in the weeks to come.

At The Greatest Royal Rumble, no dirty cheap shot was going to save Nakamura from the wrath of Styles. Burning for revenge, the champion put on a show of ruthless aggression against the man who had tormented him for weeks, landing several phenomenal blows at a man who had made the championship race rather personal.

In a bout that more about settling the score rather than claiming victory, Styles and Nakamura both battled to a double count-out. It was still champion’s advantage however, as Styles retained his title and unlocked a ruthless new streak of violence within him. 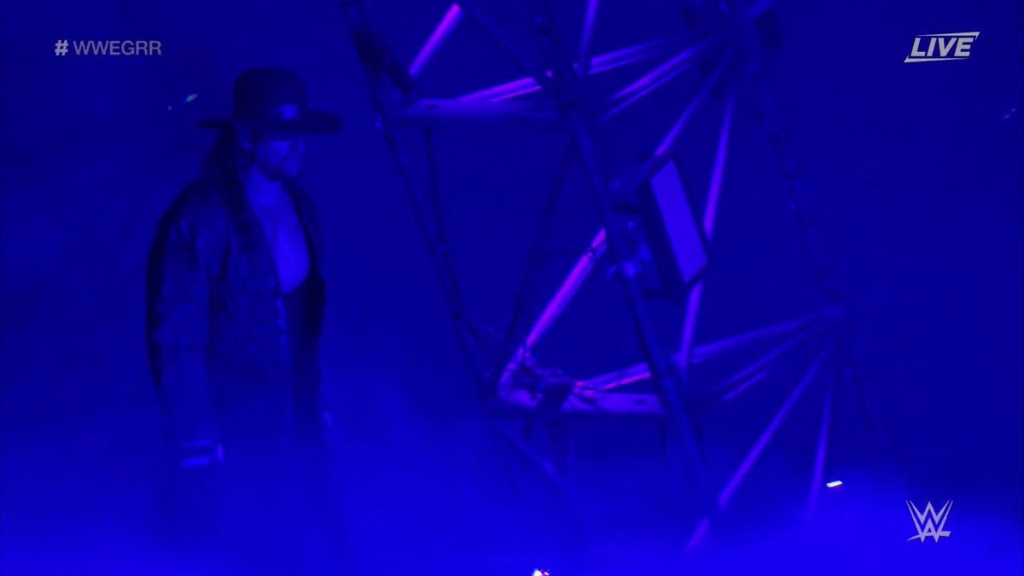 There is only one phenom, and not even the spectre of Wrestlemania could keep the Udnertaker from returning to the ring. What happened when the Deadman came face to face with the super-athlete known as Rusev however? Pure carnage. Looking for his greatest Rusev Day victory ever, the Bulgarian Brute threw everything that he had at The Undertaker.

The first casket match in three years and the first such match for the Undertaker since he battled the Big Show at Survivor Series in 2008, no holds were barred as these two titans squared off. Rusev may have had a game plan, but the sheer resilience of the The Undertaker was simply too much as the deadman buried both the challenger and his lackey Aiden English. Rest in peace, Rusev. 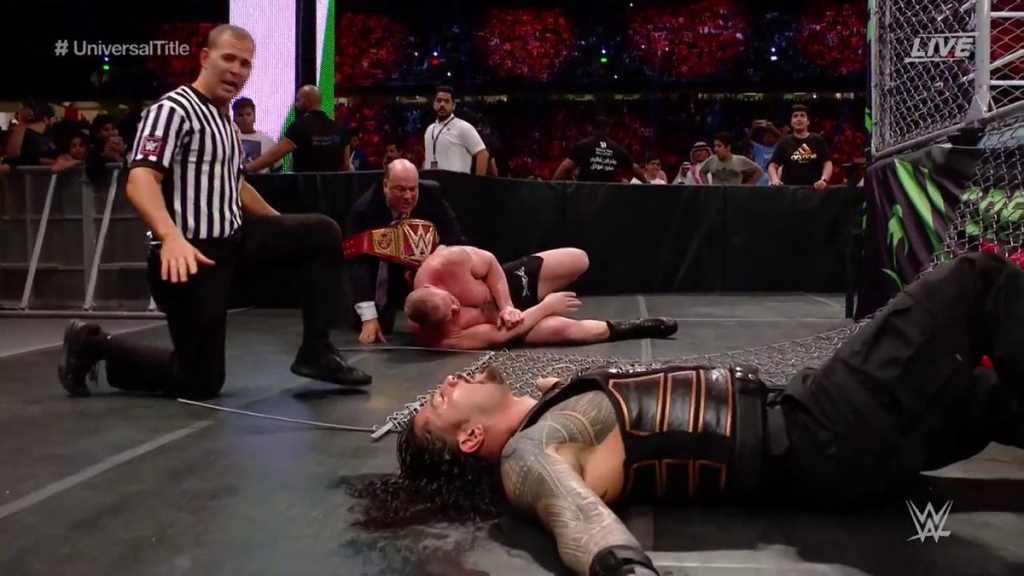 The last time Roman Reigns and Brock Lesnar met in a ring, the Big Dog ended his night in a pool of his own blood. Having failed again to dethrone WWE Universal Champion Brock Lesnar from the top of the WWE food chain, Reigns faced a do or de situation. With Lesnar having an advantage within the confines of the steel cage that the championship bout took place in, Reigns was determined to finally defeat the Beast Incarnate.

In a match that wasted no time in pulling out its biggest guns, Reigns and Lesnar began dropping Spears, Superman Punches and F5s on each other the second the bell was rung. Powerbombs from the top of the cage, the metal of the structure being used as a deadly weapon and plenty of steel chairs punctuated every sentence of this match.

Only one man could walk out of Saudi Arabia as champion, and that man was Brock Lesnar. Speared through the steel cage by Reigns, Lesnar barely hung onto his championship as victory escaped Reigns yet again, with the champ hitting the floor first. The rules are the rules after all. It doesn’t matter if you don’t like them. 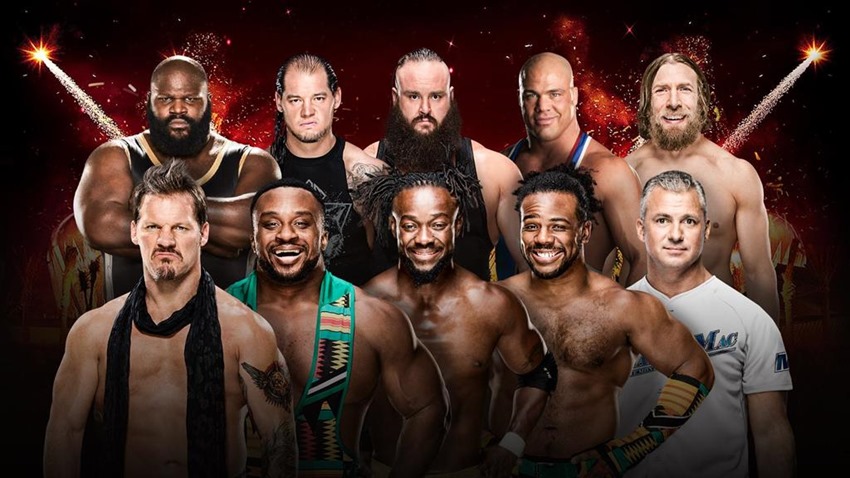 For the first time ever and possibly never ever again, it was finally time for the Greatest Royal Rumble. Fifty men! 49 losers! The rules were simple: Two superstars would start the match with a new challenger appearing every 90 seconds until one one contestant was left in the ring after the other 49 had gone over the top rope. The first two men in the ring? None other than Daniel Bryan and Dolph Ziggler, as the two superstars put on a hell of a show throughout the night.

In the end, only one man could be crowned the Greatest Royal Rumble champion. Tired, running on fumes and capable of anything, the main event came down to Daniel Bryan, Big Cass and Braun Strowman. Bryan’s Cinderella story came crashing down when Big Cass tossed him out the ring, leaving the match between two giants. Massive hands flew, titans collided and one man emerged victorious: Braun Strowman, who was crowned as the the greatest Royal Rumble winner ever. That’s all folks, thanks for reading!