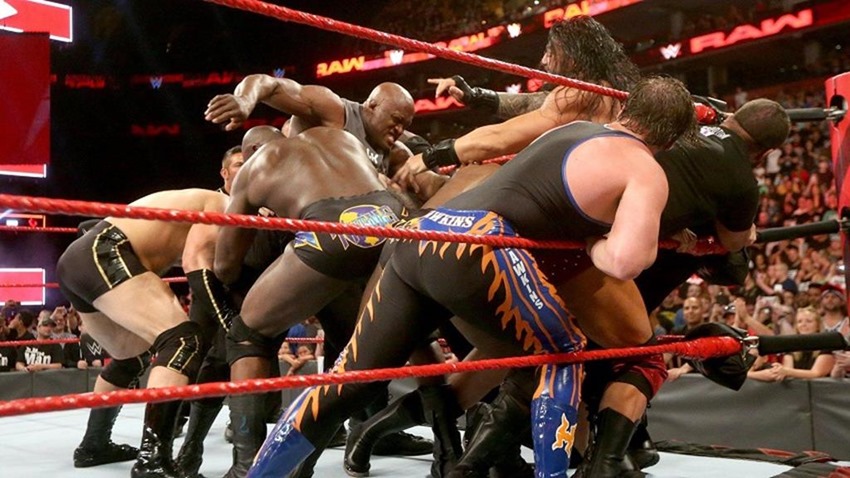 WWE Monday Night RAW took place from the TD Garden in Boston, Massachusetts. Here’s all the action that went down last night.

What began as a contest built on mutual respect has become something far more personal, as RAW kicked off last night with a war in the ring between Bobby Lashley and Roman Reigns. Neither man could wait until Extreme Rules to get their hands on each other, and only the combined effort of the entire WWE locker room could keep them apart.

There’s something to be said for knowing when to pick your battles, as WWE RAW Women’s Champion Alexa Bliss decided to rather lose the battle so that she could focus on winning the war. Mickie James may have been a sacrificial lamb against the combined might of Natalya and Nia Jax, but it was Bliss who had the last laugh as she grabbed a Kendo stick and used it to deliver damaging blows to Nia Jax.

Down but not out, the Irresistible Force broke the stick in half and sent Bliss running for the hills, as the former champion is seeking to reclaim her gold this Sunday.

That’s another win for Mojo Rawley! The Dominican Dancing Machine may have been ready to get serious, but even a more focused No Way Jose was no match for Rawley, who powered through the offense of his opponent and delivered an Alabama Slam that put Jose down for the night.

Sure, the B-Team may have yet another win in their book against Woken Matt Hardy, but will their underdog story see them emerge victorious when the true Deleters of Worlds defend their tag team gold? That should be a match with consequences that are truly…WONDERFUL!

The War Goddess was on fire last night, as she fought off a vicious assault by the Riott Squad’s Liv Morgan, reversing a roll-up pin into her own version of the move and getting the 1-2-3.

Teamwork is always the key to victory in any given tag team match, and that’s something that Finn Balor and Bobby Roode were lacking in their showdown against RAW’s constable Baron Corbin and the returning Elias. With Balor distracted and left to rot at ringside, Roode quickly felt the sting of the End of Days as Corbin and Elias picked up the win.

It didn’t work. Instead, Kevin Owens will face Braun Strowman in a steel cage match this Sunday at Extreme Rules. Good luck trying to hide from the Gift of Destruction in that demonic enclosure, Owens.

Having had a hand in the downfall of Seth Rollins as Intercontinental champion, Drew McIntyre was happy enough to give the Kingslayer a chance at revenge in the ring. Rollins was in fine form, offering plenty of offense to counter the speed and strength of the mighty Scotsman, but ringside inteference from Dolph Ziggler meant that a certain outcome was inevitable: A Claymore from McIntyre, that paves the way for this Sunday’s Intercontinental bout.