Over seven years, there were a lot of games released on the Xbox 360. Hell, a ton more are still on the way, as this console still has some strong legs underneath it that can it carry for a year or two more. Franchises were born, series were retired and various smaller games made an impact on that console. But these are some – a mere sliver – of  the ones that mattered most. 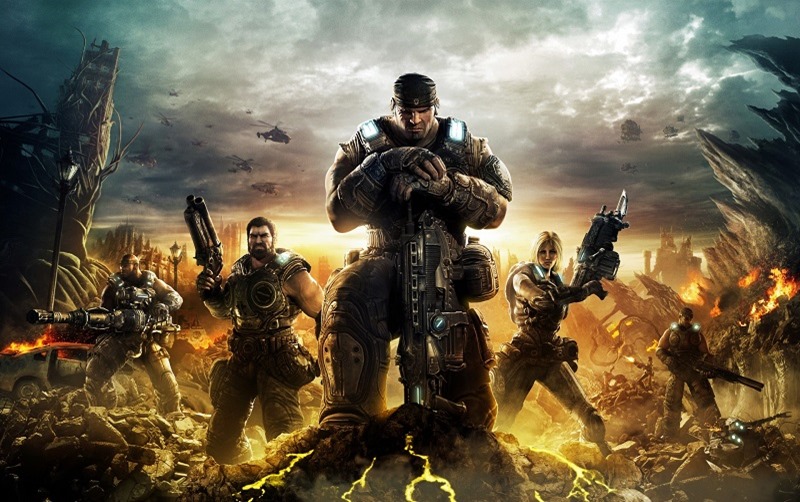 Going into a new console generation, the Xbox 360 needed a system-seller. A game that would make people turn their hands, and slap down cash for something that was fresh and new. And that’s just what they got, with Gears Of War. Inspiring a legion of copycat games in its wake, Gears Of War was a brutal experience that felt meaty, substantial and gritty.

Chainsaw rifles, hordes of enemies and even bigger monsters were waiting in the dark, with the action spilling online. Two sequels followed after the original game, upping the ante and improving on the core mechanics, making Gears Of War a signature staple of the Xbox brand. 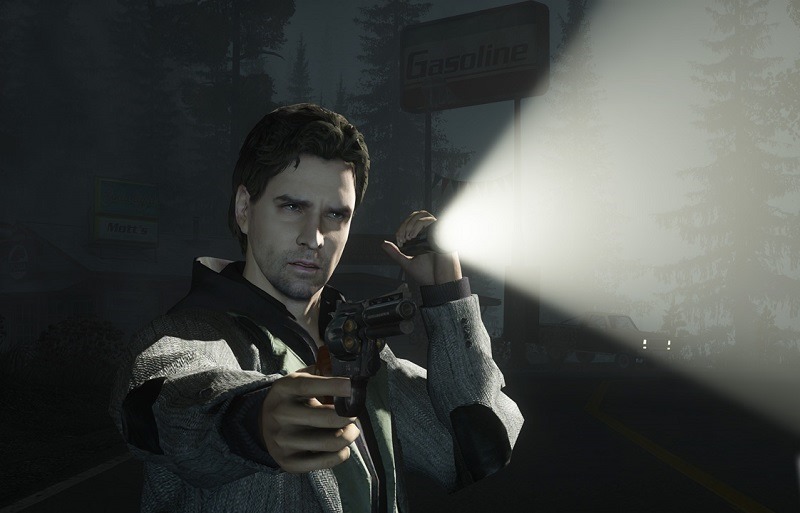 The Xbox 360 could do action. It could do racing. Heck, it could even do casual. But could it keep you in suspense? One game certainly could, as Remedy Entertainment finally completed Alan Wake and unleashed a meta-nightmare on the world, with one unlucky author caught in the darkness.

It was a thrilling game, and although repetitive at times, the unique focus on using light as a weapon and the creepy narrative helped make this game a masterpiece. 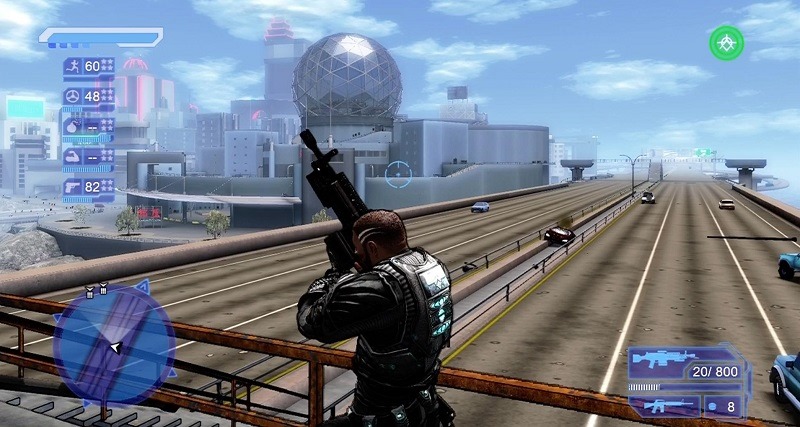 Grand Theft Auto 3 had set the bar for sandbox games, re-creating a new genre, but Crackdown leaped over it and collected orbs with ease. Crackdown wasn’t just a fun game where you could live the life of either a super-powered law enforcer or an unhinged maniac with power that had corrupted absolutely. It was also a tactical game, with your focus on various gang leaders having an impact on how you could tackle the big bosses that were running that city.

And the co-op gameplay was just the icing on the cake.

The Witcher 2: Assassins Of Kings 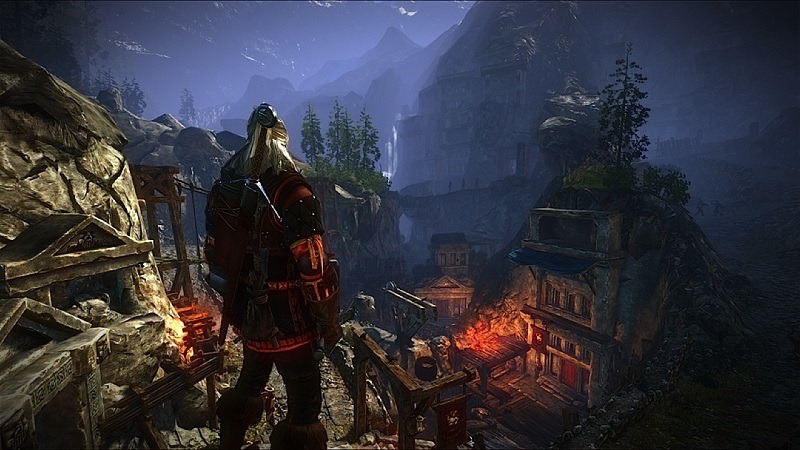 The Witcher 2 was a game that looked magnificent on PC. Naturally, this was a game that would never work on console. It was too technical, the combat was too tied to a mouse and keyboard combo, the Xbox 360 hardware could never render those visuals. How wrong people were. This game wasn’t just ported, it was improved upon for console. A stack of new content was added in, visuals had a new shine and the controls were intuitive. And that’s how you do a console port, ladies and gentlemen. The first Forza Motorsport had driven into first place on the Xbox 360, bringing new life to technical driving. And on the Xbox 360, that series reached its peak in the fourth game. There was a visual upgrade that made the previous games pale in comparison, while a deal with Top Gear ensured that having a car in the game wasn’t just satisfying, but educating and entertaining as well. Now how fast do you think it went around our track? 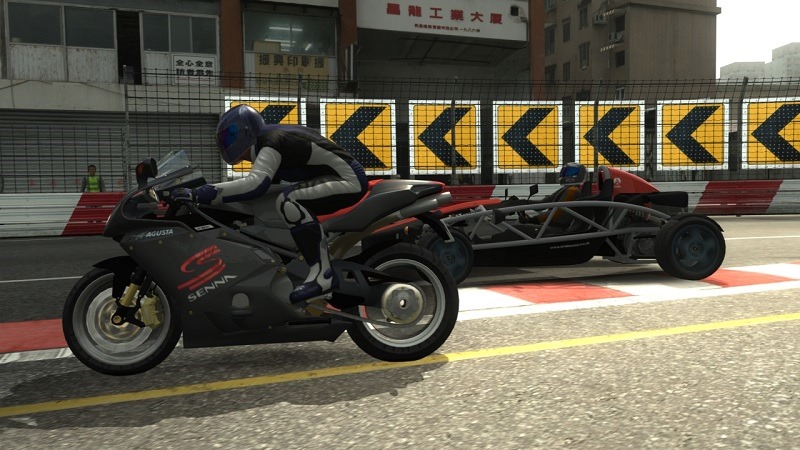 One of the early launch titles for the Xbox 360, Project Gotham Racing 4 was a mature franchise that had learnt a lesson or two since its rougher debut on the original Xbox console. This was the polished game of dreams, an arcade racer with some bite to it that had a ton of cars waiting for players, as well as a few motorcycles. It’s undeniably the very best game in the Project Gotham Racing series. It’s unfortunately also a swansong, as this was the final game produced. 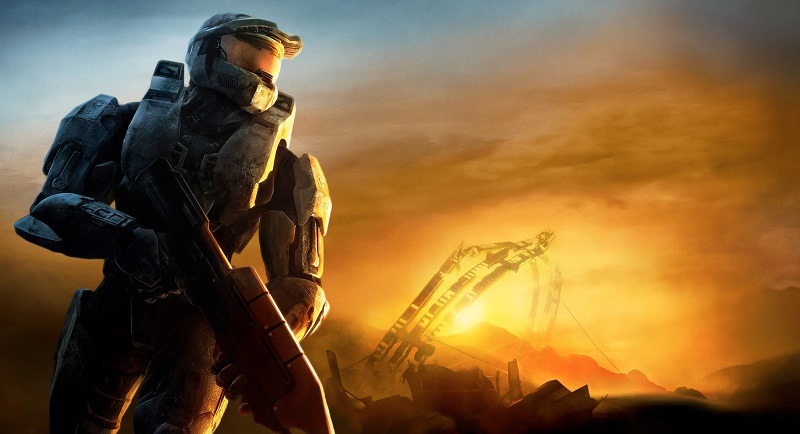 It was time to finish the fight. For good. Halo 1 and Halo 2 had blazed a path on the Xbox, revolutionising the shooter genre. But for a debut on the Xbox 360, Bungie had to go for broke or go home. Pulling out all the stops, Halo 3 was one of the definitive versions of the game, with quality and quantity packed into many offline and online modes. Master Chief may have been on his way out, but he was going out with a bang. 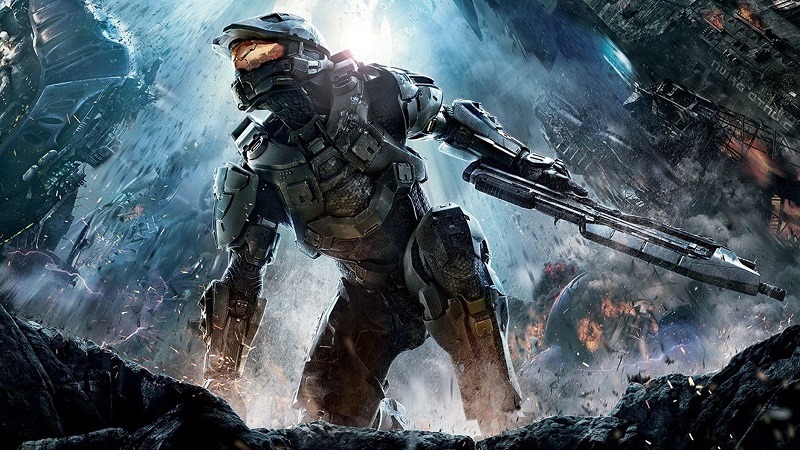 At least until he could return for a fourth core adventure that is. With Bungie leaving to start work on the new Destiny franchise, Microsoft needed a studio that could keep the spirit of Halo alive. And by forming 343 Industries, they got a team whose sole job was to finish more fights. A new adventure, enemies and a game that pushed Halo 4 to the bleeding edge of what was possible on the Xbox 360 was released, proving that even without its original team, Halo was stronger than ever. 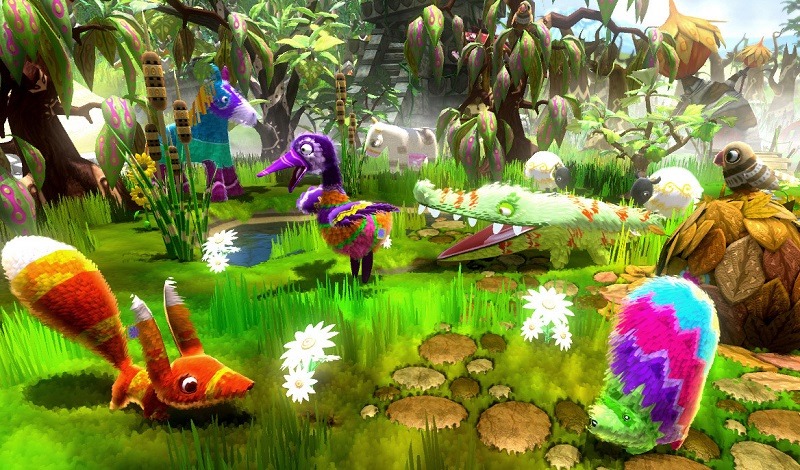 Sometimes, a game becomes more than the medium it represents. It becomes an experience. A journey into magic and wonder, something that you lose along the way when you become an adult. And in the bright and colourful world of Viva Piñata and it’s numerous creatures, that magic is everywhere. 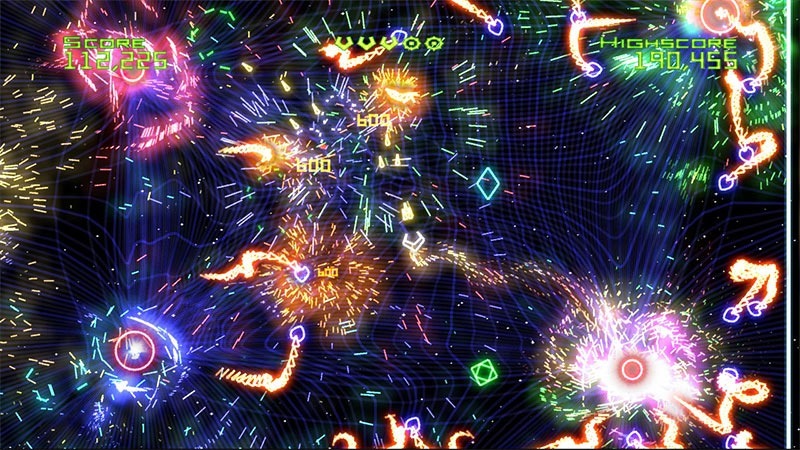 One of the first games to be offered for the Xbox 360 on its Live Arcade service, the game that began as a playable game in the Xbox’s Project Gotham Racing 2 brought crazy twin-stick shooting to a whole new audience. Once holding the record for the most downloaded game on the service.

Featuring retro, psychedelic graphics and swarms of enemies, it was for a long while the game to chase scores on the Xbox 360. 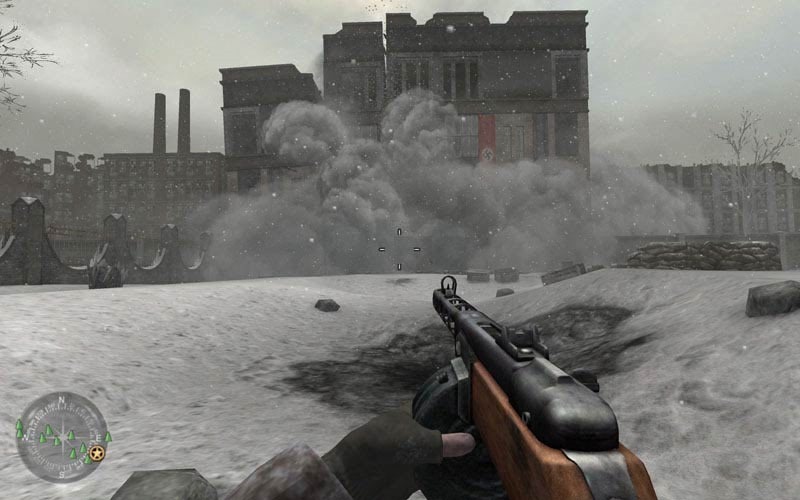 Gone are the days when World War II was the primary area of exploration for shooter games. That’s where Call of Duty found its roots though, crafting some really intense and memorable war scenarios.

Call of Duty 2 improved on the first game, making it bigger and better. Visually it was rather good, and the sound was praised by many. It also introduced the regenerating health bar, something which seemed alien at the time, yet has gone on to be the staple health system for many shooters today. It was only available for Xbox in the console market. It helped build a fan base on the system that made the genuinely revolutionary Call of Duty 4: Modern Warfare at home on the 360. 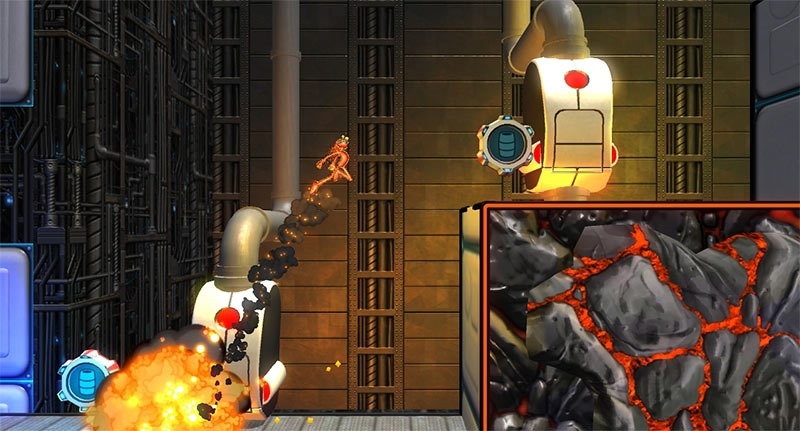 When it comes to simplistic control schemes nothing is simpler than ‘Splosion Man which has a directional stick and one button that makes you explode. However while the controls may be simplistic the game itself isn’t, this is easily one of the most difficult games of the generation and very few people  managed to complete the entire thing.

Hours of entertainment for less than the price of a case of beers, you can’t beat that for value. 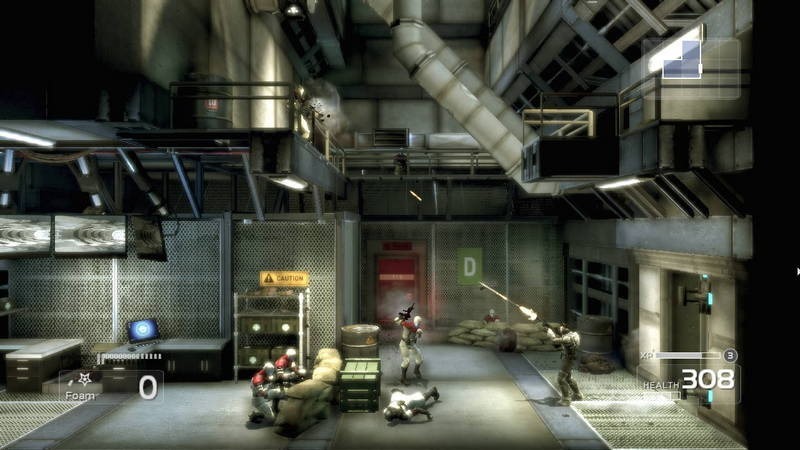 Metroid is a Nintendo property, so it’ll never appear on a Microsoft platform – but that’s hardly a problem when you have Shadow Complex. Released at a sweet price of $15, Chair Entertainment delivered a game that may not have been high in originality, but nailed the Metroid formula perfectly.

Blocking off access to bits of the underground cave that made the game its home until you had the right equipment, Shadow Complex was a game of exploration that really showed how to deliver top notch, AAA entertainment at a budget price. 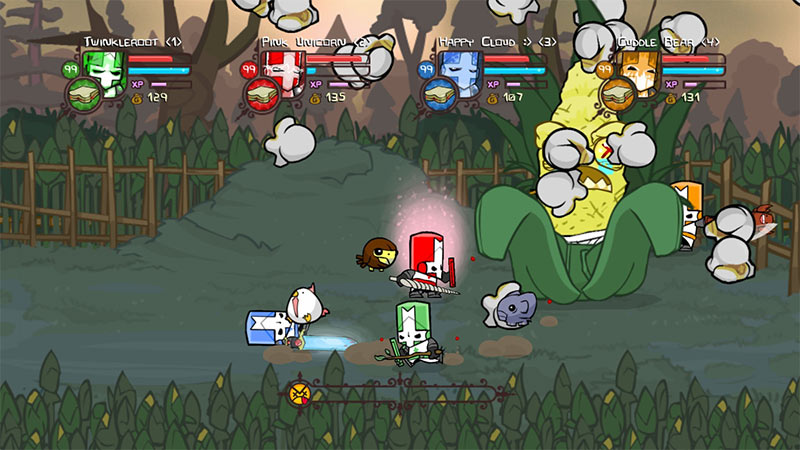 Xbox Live Arcade bought with it a ton of gems which may have otherwise been missed. It was the start of something great for Indie developers. Castle Crashers was a 2D beat ’em up that was well received by critics that bought with it some 4 player co-op bathed in some light RPG elements.

With an irreverent and perhaps even crude art-style, It was a formula for success that found the love of many – even if its online co-op was broken at launch.  While it is available on many platforms now, it started out as an exclusive for the 360. The Wild West has fascinated people for generations – just look at the masses of spaghetti Westerns. Red Dead Redemption takes players back to those bad old days, when bandits waiting around every corner, horses needed to be caught and tamed and the law didn’t have quite the long arms it’s known for.

Red Dead Redemption gave players the opportunity to take the law into their own hands, or become an outlaw themselves, or just spend hours hunting various birds and animals.

Red Dead Redemption offered players a rich storyline and gritty characters against a realistic and living environment. With plenty of options for all different types of game play activities, Red Dead Redemption took sandbox gameplay to a whole new level. Really, it just let us feel like we were walking around in cowboy boots with spurs on. 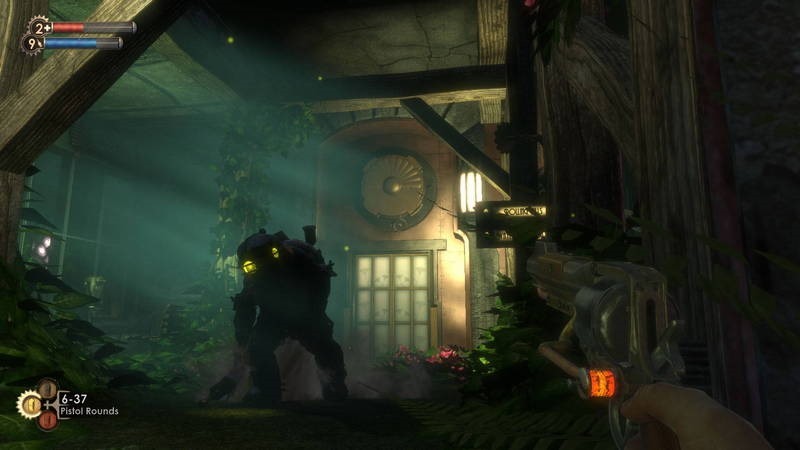 If you haven’t played the very first Bioshock, Would you kindly rectify that? Starting its life as an Xbox 360 exclusive, Bioshock is sublime.  Plummeting down to the undersea dystopia, Bioshock captured the essence of what made System Shock 2 so damned good, and placed it in a new setting. Rapture, was very much a character itself. Constructed as an idealistic society for a an elitist group of scientists, artists and industrialists, the Ayn Rand idealism is no more, replaced instead by hopped-on-plasmid splicers,  corpses, and giant guardians protecting the girls who loot ADAM from the dead.

The atmosphere, the smart gameplay that dispensed with standard running-and-gunning and that Shyamalanian twist. The thrill of taking down a Big Daddy with a few trip-wires and an errant grenade. Harvesting or saving Little sisters.  But mostly, that atmosphere. 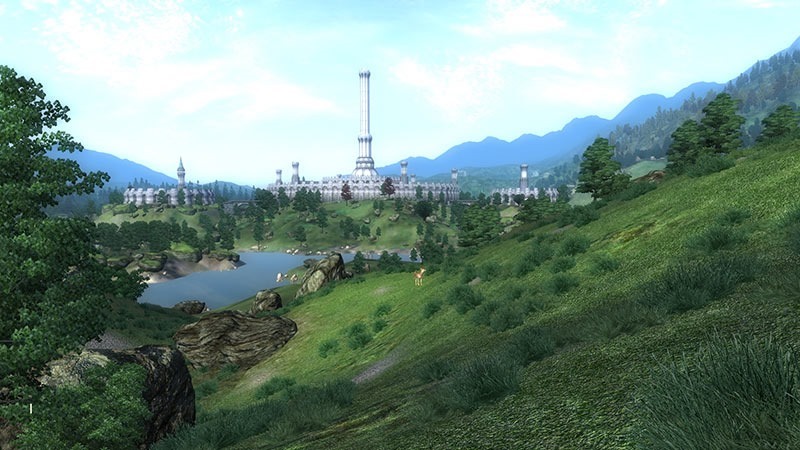 If you ever needed to go questing for days on end, Oblivion was the obvious choice. The game was exclusive to Xbox 360 on the console market when it first launched. Following the success of Morrowind on the original Xbox, there was a new generation of hardware to play with and Bethesda took advantage of it.

Oblivion not only looked amazing, but there was lots to see and do as well. Cyrodiill was a joy to explore, and there were loads of enemies and quests just waiting to be dispatched, as well as a variety of ways to level a character. 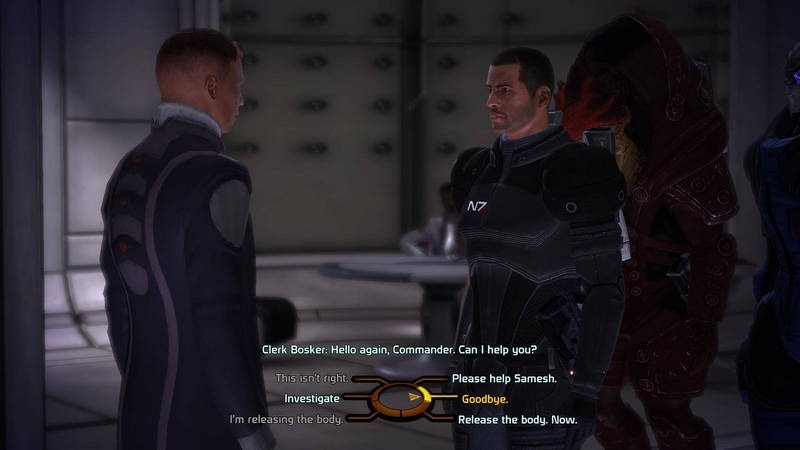 Like Bioshock, Mass Effect also began its life as a game exclusive to the Xbox 360. When you look at games today, its easy to take for granted how far they’ve come. Operatic space battles, custom soldiers and choices that matter, these are the things that the Mass Effect trilogy pioneered. A cover-based shooter with space magic essentially, Bioware created a massive universe over three games, constantly exploring the mythology of a galaxy under siege.

It’s the Star Wars saga of video games, a crusade that happens to be an entire trilogy long, and while it may have stumbled towards the finish line, Mass Effect proved that the journey was indeed far more important than the final destination.

Relive your Xbox 360 memories. Tell us what games you played on the console that mattered to you most.