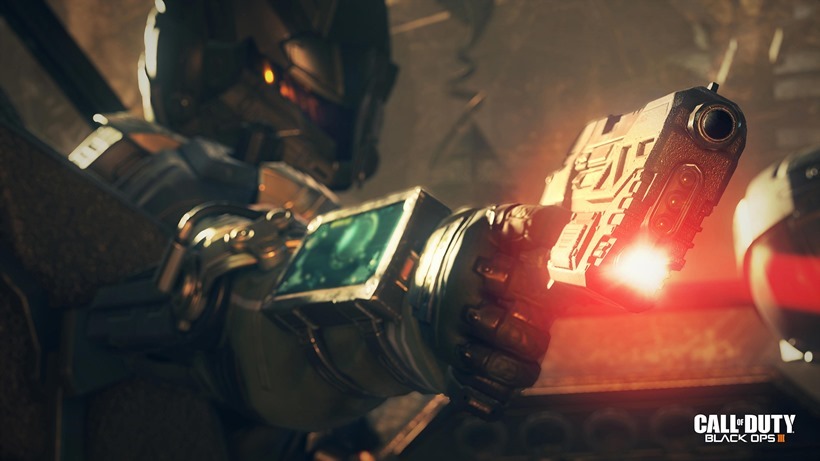 That new Call of Duty Black Ops 3 game? Looks kind of dey-you sexy, doesn’t it? That was the initial impression given when the latest Call of Duty debuted earlier this year, as the game looked like it had lifted several influences from the upcoming Deus Ex: Mankind Divided.

Augmentations, nanotechnology and floaty robo-bugs of death. Something that both games seem to share. But it’s not something that Call of Duty was intentionally sharing similarities with, according to multiplayer director Dan Bunting. “I was actually shocked by that,” Bunting said to GamesRadar.

Because what they’re correlating it to was basically a lot of very common science fiction tropes. If you’re in the future you’re going to instantly be compared to science fiction.

Thing is, Call Of Duty games usually have a fair amount of realism that governs the technology that players get to use in those games. Everything available, has some sort of realistic prototype or concept that is being worked on. “In our world we build from technology stories of today,” Bunting explained.

What’s the zeitgeist and cutting edge realms that may not have hit the mainstream yet? We never start from looking at what some other game is doing. Especially when many other games are building off of other pre-existing troops and other genres.

We always start from a position of research into real world technology. We did so much research on this game, looking into what’s happening today that’s going indicate where trends are heading tomorrow. It was a lot of fun to draw lines from present day cutting edge technologies and sciences to where they think they might be in 30 years, 40 years time.

That real-world bend then influenced the look and feel of the game, which actually created a modest approach to such tech which already supports robot drone armies and explosive nanobot bugs. “We’re probably actually fairly conservative on some fronts,” Bunting explained.

Even today there are nanobots that are at the scale of insects. If you do research into it now and there’s definitely a lot of interest from military organisations to develop that technology further. If you can get something that imperceptible, at a small scale, transmitting information that would be quite a powerful technology.

Still, with the current trend of shooter games that favour more movement options and more future hardware with which to kill, it’s not exactly shocking that comparisons will be made. “I guess it’s not surprising because I know the nature of the internet or the public is to have a knee-jerk reaction to a very simple image or message,” Bunting said.

They make connections to something. It’s easy for them to grasp and understand it.