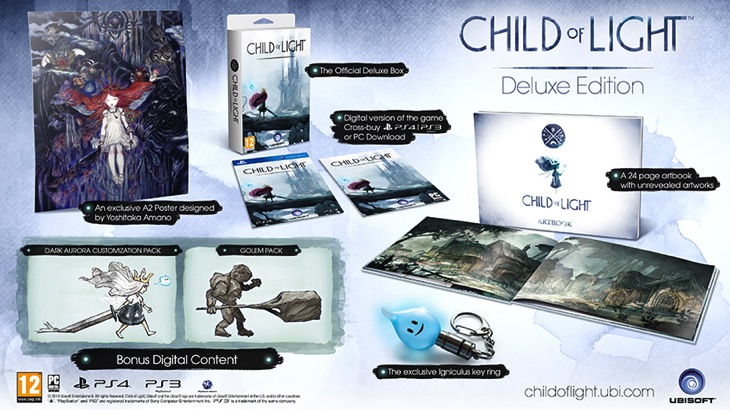 Of all the titles launching in the first half of this year, I have to say that my heart is aching the most for Child of Light. It simply looks beautiful, and impressive, and it’s an RPG that my soul has been crying for. Now, we get a new trailer and details on the Deluxe Edition.

Finally, the UK and EMEA territories (that includes us, in case you were wondering) are getting something the US isn’t. That’s right, the Deluxe Edition is exclusive, and it’s mighty pretty. Including bonus digital content, an A2 poster designed by Yoshitaka Amano, a 24 page art book with previously unrevealed artwork and an Igniculus key ring, the Deluxe Edition will also grant access to additional game content with a bonus quest, new character and a pack of collectibles. Sign me up!

Don’t worry if you’re unsure if you’ll be upgrading to a newer console, either. The PS3 and PS4 version of the game for retail and digital distribution will get the cross-buy option. In case you’ve forgotten what this game is all about, the official description is:

Child of Light is a reimagining of classic fairytales, inviting players on an epic adventure into the magical painted world of Lemuria. Players will uncover mysteries, participate in turn-by-turn combat inspired by classic JRPGs, and explore a mystical kingdom. The game puts players in the shoes of Aurora, a child stolen from her home, who, in her quest to return, must bring back the sun, the moon and the stars held captive by the Queen of the Night. Helped by her companion Igniculus the firefly and several unlikely allies, Aurora will face her darkest fears, including dragons and other mystical creatures, in this modern take on a coming-of-age story.

Just when I thought there wasn’t any way to make me want this game even more, they add this stunning co-op trailer that makes me want to play well with others. 30 April simply can’t come soon enough.