After watching the first official COD: World at War trailer, I noticed something rather interesting at the end. Underneath the “codwaw” logo I saw the Games for Windows logo as well as an Xbox 360 logo, but lo and behold, no mention of the PS3.

I did a bit of digging and came across some scans on the N4G forums from the upcoming Play magazine and from what I can tell, it looks like a PS3 version is in the works but is having some serious issues. Are they bad enough that the game could get cancelled?

Scans and more after the jump. 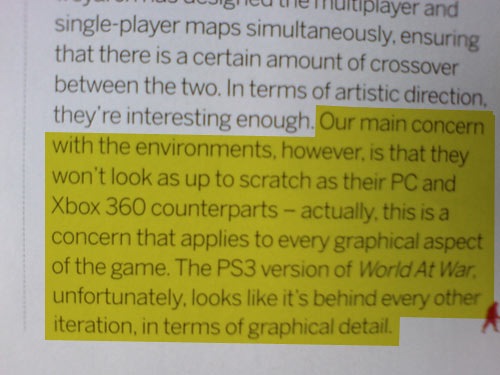 I have highlighted the text that concerned me from this scan. What on earth could be happening that the PS3 version could be suffering so badly?

There is talk that the PS3 version could even be cancelled, but I can’t see that happening in a million years. COD4 is running just fine on the PS3 so I don’t see any reason for measures that drastic to be taken. It’s common knowledge that a lot of games use the Xbox 360 as their lead platform, but there is no excuse that could save Treyarch from screwing up the PS3 version so badly that they would have to consider canceling it.

Let’s hope that word gets out about this and that we can be given an official statement from Treyarch or Activision soon. Even if the cancelation wasn’t an option, we have to deal with the fact that the PS3 version is apparently looking a lot worse than the PC and 360 versions. If this is the case, then they have a lot of explaining to do.

We live in an age where fans can take the bare minimum, whip out a tablet and get to work …