I stopped playing Destiny a long time ago, but I know thousands of others haven’t. The game’s most recent expansion, The Dark Below, was a bit of a disappointment to most, but Bungie has a few chances to makes things right (and better) with their projected expansion roadmap this year. Too bad they’re not getting better at plugging up leaks.

A new image, which is the culmination of a ton of data mining, has revealed all the content set to arrive with the game’s next expansion, House of Wolves. The second part of the season pass mimics The Dark Below in structure, giving players three new Story mission, two new Strikes and one new Raid, named The Arena. There will probably also be some new narrative bits to tie things altogether, although The Dark Below didn’t really impress in this department.

Included with the new missions are four new Crucible maps, as well as two brand new modifiers to match types. Titled Hardcore and Inferno, these modifiers will disable the trackers in multiplayer games, and also only count kills as points. There’s also a few new items coming to vendors, including armour and 37 brand new ships.

The Arena, the final raid, will include a full set of armour for each class, as well as nine new legendary weapons. There’s also the chance to pick up two new exotics – a scout rifle called 347 Vesta Dynasty and a shotgun called Lord of Wolves. There are also three new pieces of exotic armour for each class thrown into the mix, just to keep the constant grind going. 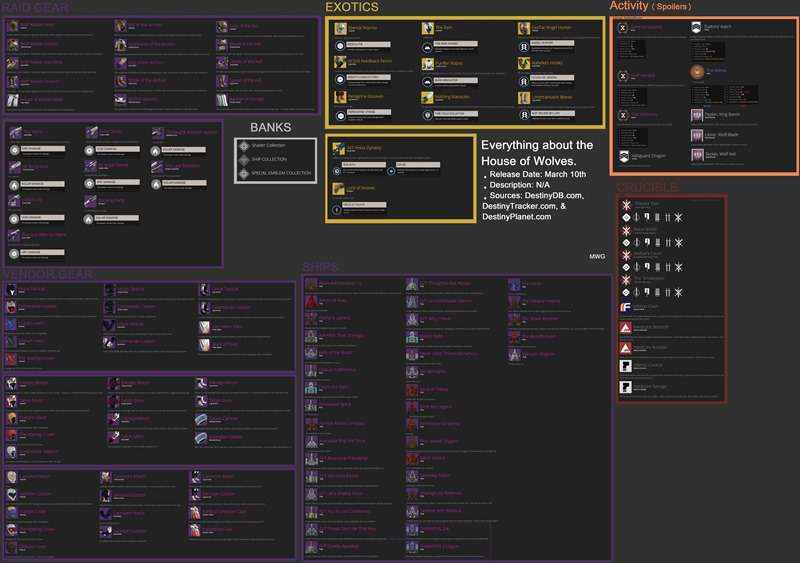 Bungie has faced a bit of an uphill battle with Destiny since launch, and now depends on good post-launch content to keep the game alive. House of Wolves is expected to arrive in March, and hopefully it’s able to keep the player base interested in Destiny until Comet: Plague of Darkness reportedly arrives in September.

Nothing about House of Wolves is really begging me to return to Destiny, but I can see the appeal if you’ve already sunk hundreds of hours into it already. Still, after the lukewarm reception of The Dark Below, will you be forking out more for the same?