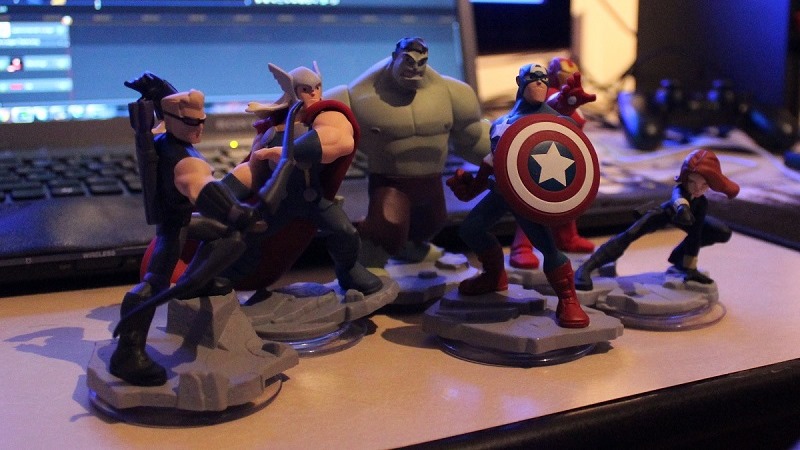 If you’re reading this, then the embargo for Disney Infinity 2.0 has most likely lifted, and reviews are pouring in for the Marvel-centric upgrade to that game. Last year saw the debut of Disney Infinity, and while it wasn’t perfect, the potential to grow was most certainly there. And all I can say is, make mine Marvel.

I haven’t had enough time yet to do a review myself, because you know how we like to actually complete games over here before we write about them. I’ve had Disney Infinity for about two days now, and what I can tell you, is that the game is indeed better than the initial offering, especially if you’re into Marvel heroes and villains. How much better exactly, remains to be seen as I carry on with the review. So expect that soon.

Disney was kind enough to send us a review kit for the game, which included pretty much all of the Marvel heroes. And if your kids are into this, then this game is going to break you. Check it:

Thing is, what you want to know is are these figures worth it? What do they really add to the game? Well for starters, I think the young ones in the family are going to get a kick out of them. They’re well-sculpted, have vibrant paint jobs and are pretty sturdy overall. Kids are going to want to play with them, outside of the game. And if you’re a collector of figures, they also look pretty nifty sitting on a shelf. But here’s a quick look at the figures themselves, individually. 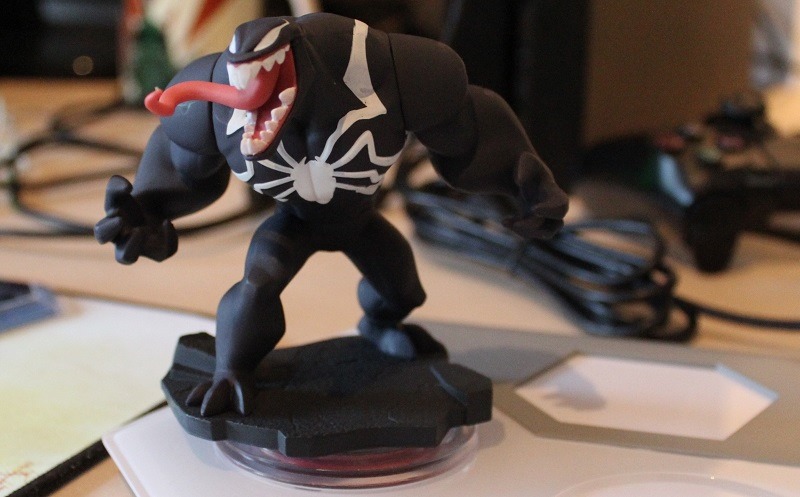 You know what I love most about the Venom figure? That he has big ol’ sharp and nasty symbiote buck teeth. It’s so cute. In the game, he’s a bloody brute, who plays like a Hulked-up version of spidey, and has gooier attacks than a Japanese movie from under the shelf of your usual DVD rental shop. He can also web-swing, but you’ll have to upgrade him for that ability. 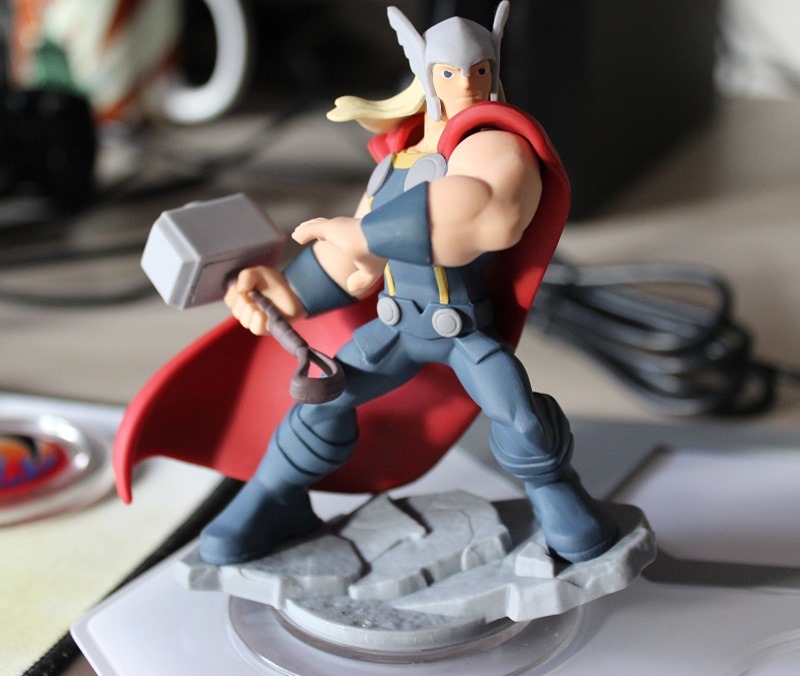 Whosoever holds this figure, be they worthy, shall possess the power of mighty Thor! I’ve been using Thor the most in the Avengers playset so far, as he has a fantastic balance between speed, power and durability. He’s also got flight, kick-ass ranged attacks and a cape. None of the other figures can boast that, and I don’t care what Edna has to say about capes. Because he looks dashing. 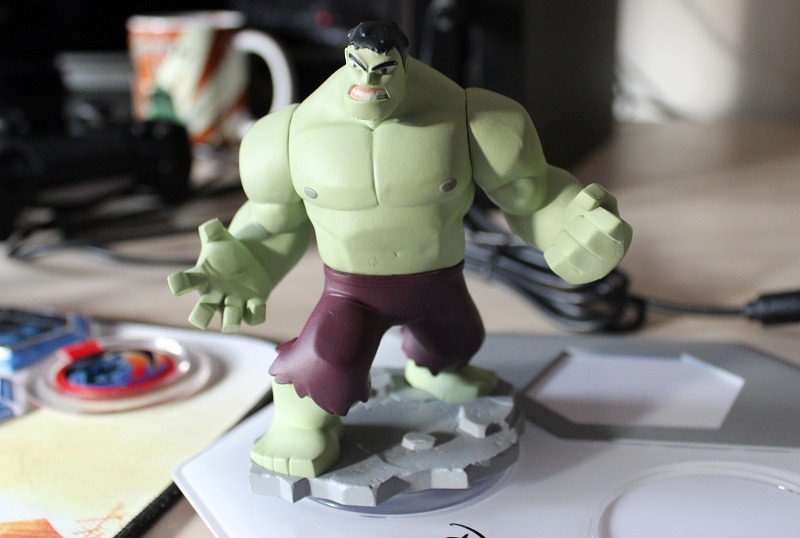 HULK SMASH YOUR COLLECTION OF OTHER FIGURES IN THE TOYS TO LIFE GENRE! Hulk is pretty much what you’d expect in the game. Big, strong and boasting an obscene amount of health, the gamma giant just takes whatever is thrown at him and pays it back tenfold. He starts off on the slow side, but once you start pumping skills into him, he becomes a powerhouse that climbs buildings and has gamma-powered jumps added to his combos. 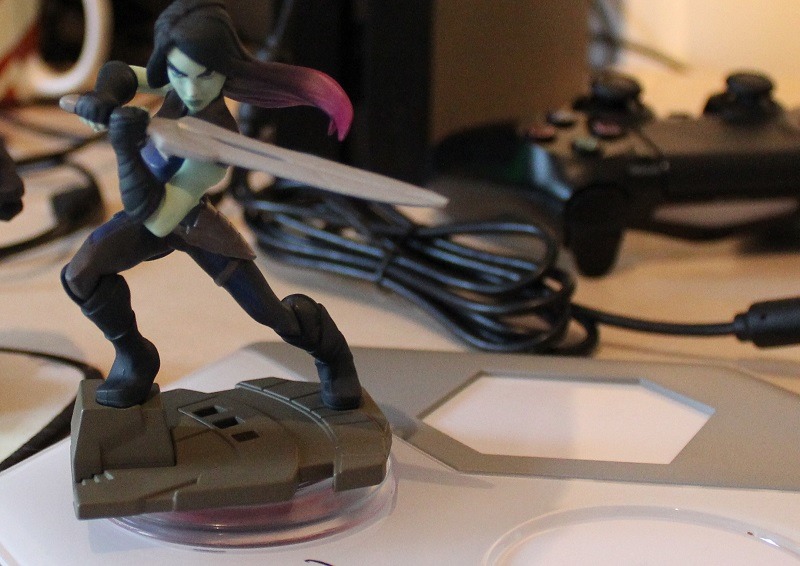 I’m so in love with this character. It’s not the green skin that stands out for me, but the fact that her sculpt captured her tinted hair perfectly. In the game, her attacks consist of quick sword strokes and plasma rifle shots for ranged damage. I’m still playing around with her character, but it looks like leveling her up will add a ton to her speed and agility in the game. 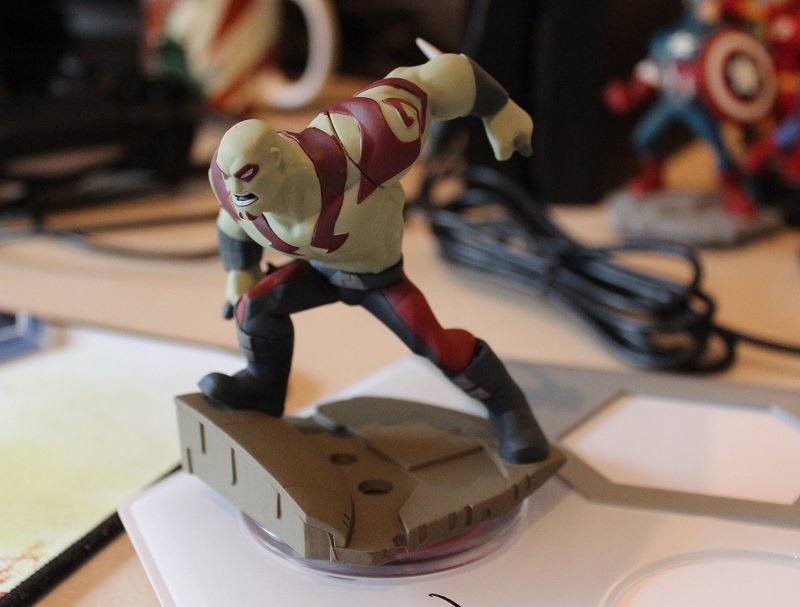 Drax doesn’t boast the ranged attack that some of his other Guardians do, but he’s a melee maniac in the game. Not only does he do obscene amounts of damage, his combos are quick and his special attack can clear a room easily. Throw in a healing factor skill and a special ability that allows him to buff his speed and attack, and you have a destroyer on your hands here. 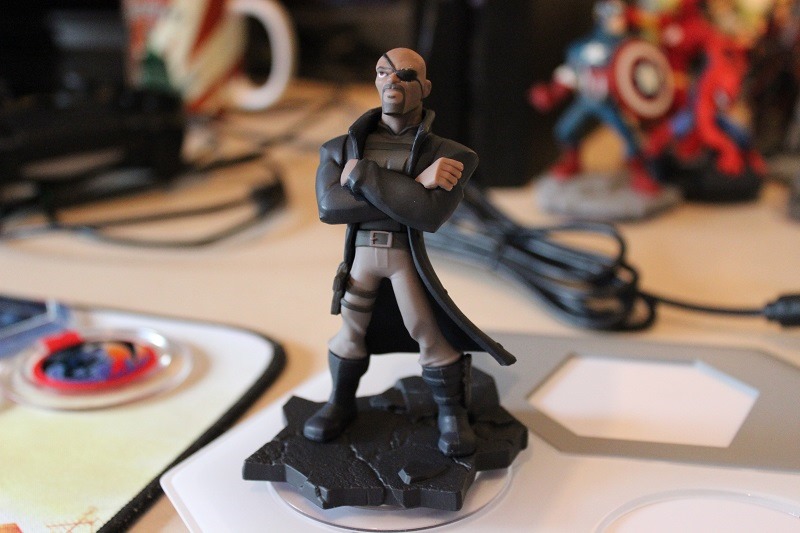 I’m not saying that the head of SHIELD is an intimidating figure, but I left him alone for a few minutes and came back to find that he had organised all my other action figures into a crack squad of operatives. I love the pose that they selected for this figure. He may be able to kick all kinds of ass, but his powers lie in super-delegation, as he just oozes an aura of command and respect. Plus, it’s the only figure in this collection that is actually voiced by Samuel L mother-lovin’ Jackson, you dig? 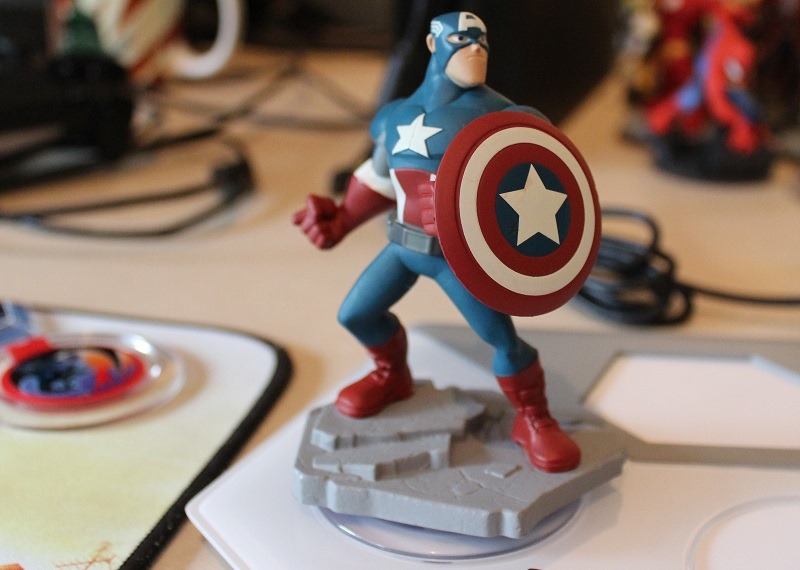 When Captain America throws his mighty shield, all those who oppose his shield must yield! The star-spangled Avenger is one of the better-balanced characters in the game. On the one hand, you’ve got a quick-footed Avenger who can leap tall and strike hard. On the other patriotic hand, you’ve got a brawler who can defend himself with some fantastic combos, while taking down enemies from a distance as well. Heck, I want to take the pledge of allegiance, just playing as this guy. 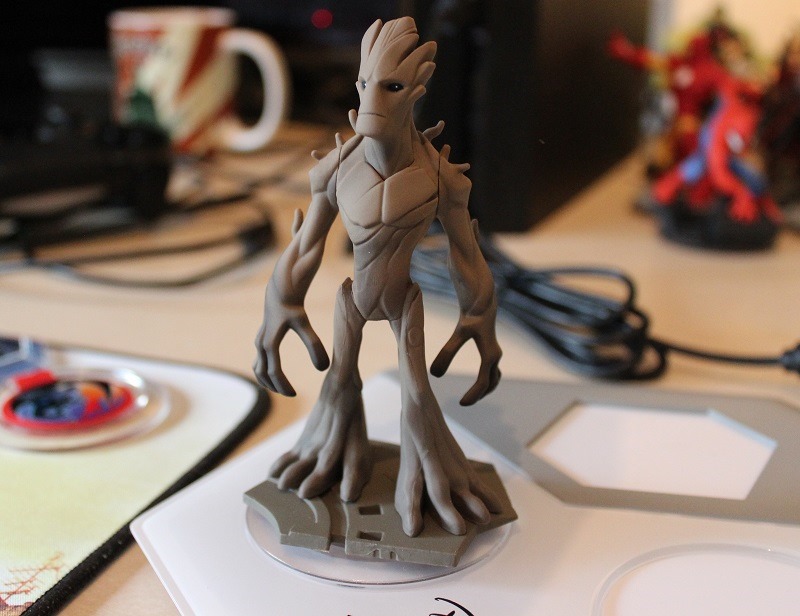 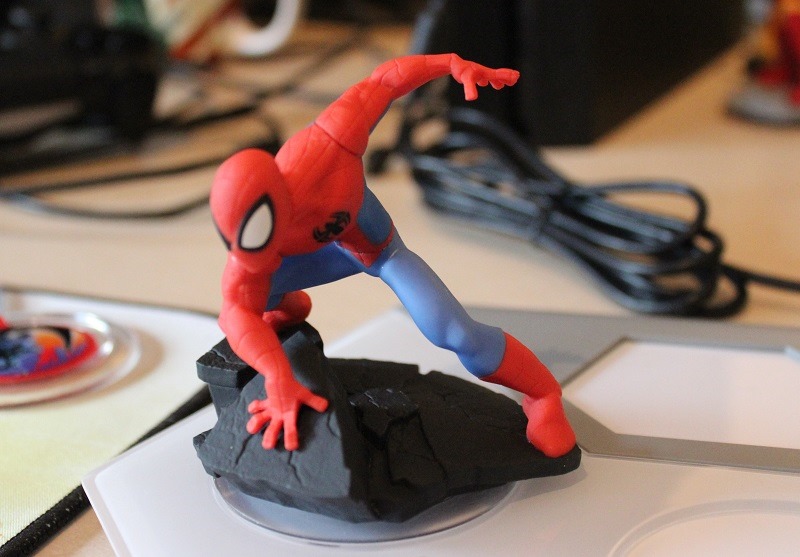 The current crop of films may be terrible, but the Ultimate Spider-Man cartoon that happens to be airing right now on TV is actually pretty fun. And that’s the kind of character that Spidey is in the game. There’s a certain joy to the fact that his powers are easy to use and master, and his sculpt has some rather nifty webbing etched into it. Disney Infinity 2.0 also gives you a Spidey game that is quite fun to play, unlike anything else that has been released lately that stars the webhead. 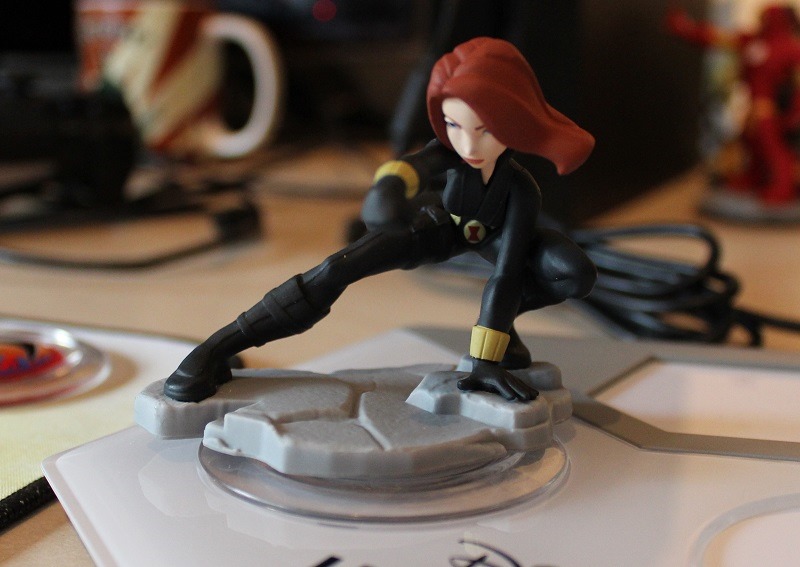 Not every character in the game needs muscle to win the day. Black Widow focuses heavily on speed, agility and stealth in her figure. She’s got an edge in staying out of harm’s way, dodging any brutes and then just laying down a tremendous amount of fire back at them. Couple that with her invisibility ability, and she’s as stealthy as can be. 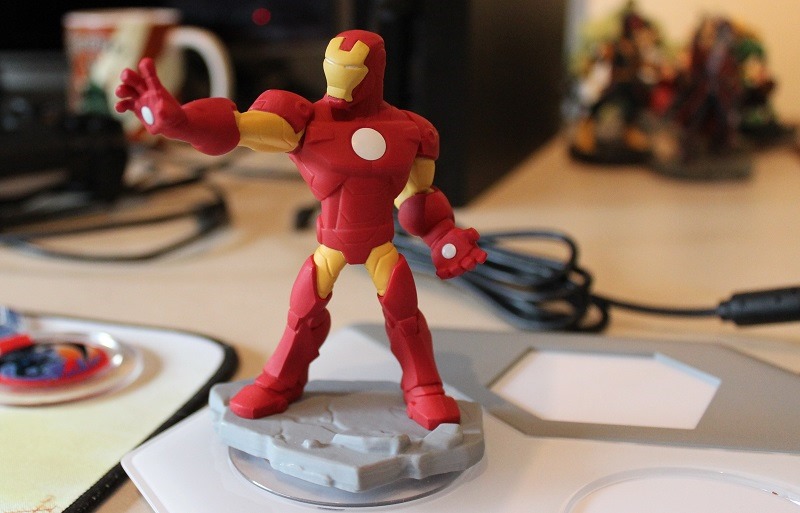 The Iron Man figure has one of my favourite poses in the game. Tough, fast and deadly with the ranged attacks, the Tony Stark figure is another well-rounded addition. He’s a starter pack figure, so it makes sense then. One of the cool things that I discovered about this particular character in the game, is that if you fly directly into the ground, Iron Man will execute a perfect three-point landing. I love little touches like that. 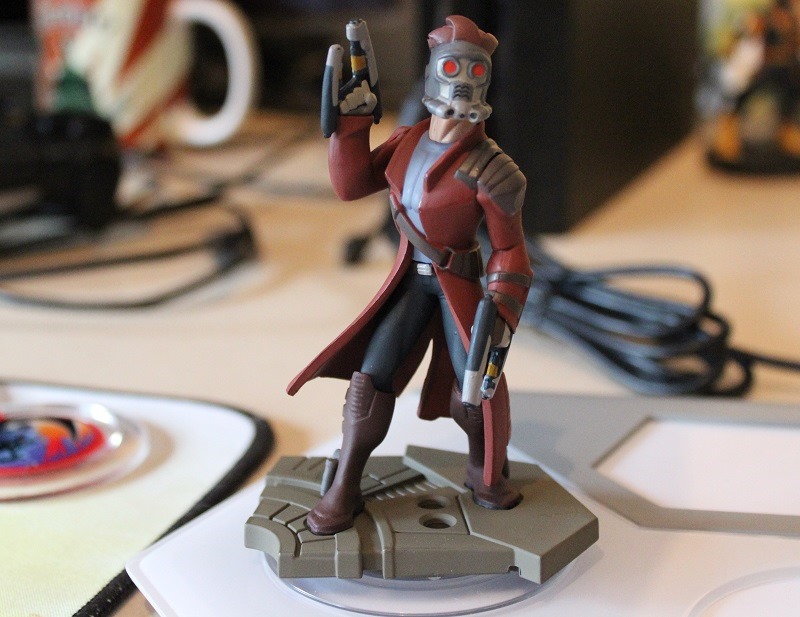 I’ve been playing with Star Lord the most in the Guardians Of the Galaxy set. He’s got that cocky swagger that made him so popular in the August film, jet-boots and blasters that keep him out of danger. He’s easily the most well-rounded figure in that line-up, as well as the one with the best paint job on his physical figure. There’s a lot of elements at play with his design, but I think the Disney team have done a superb job here. 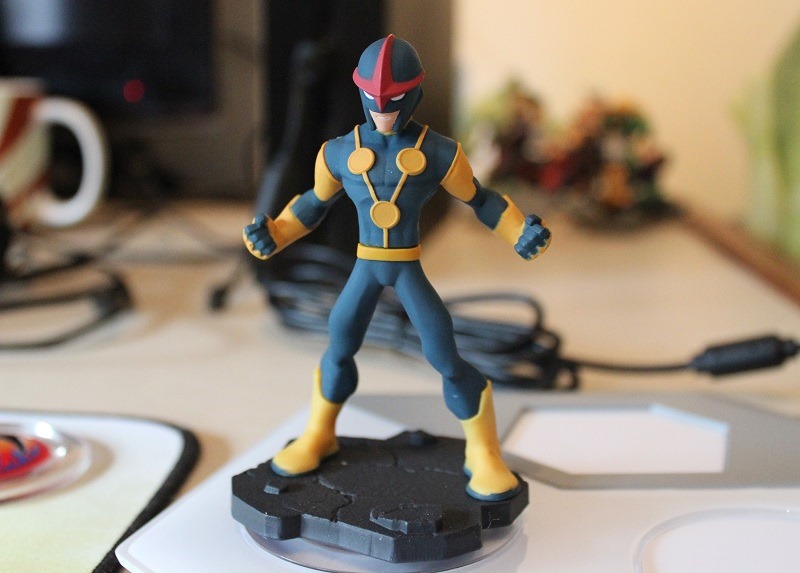 Hands down, Nova just has the best pose for me. It’s just so confident, so ready to take flight and save the day. The paint job is also spot-on, and in the game, his powers are easily the most visually impressive. He can fly, he can blast, he can singe! I’m quite happy that this figure made the final cut for Disney Infinity 2.0. 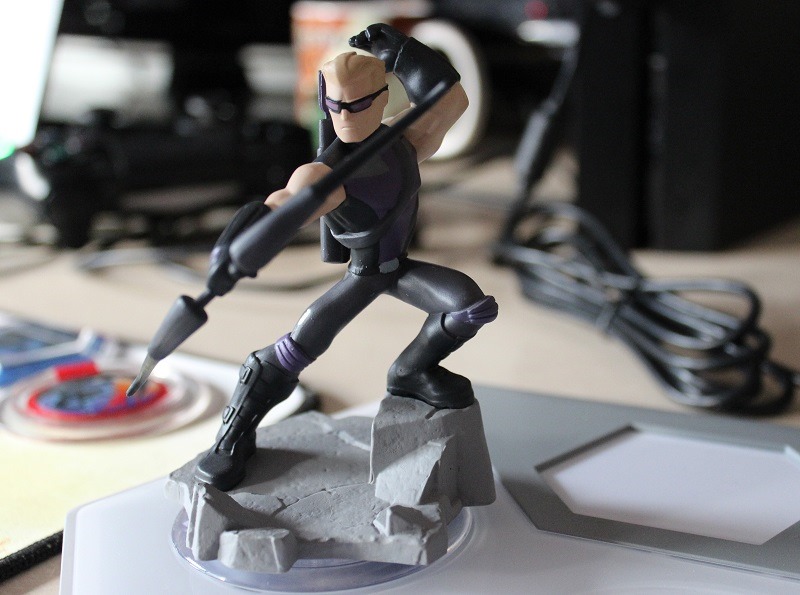 Hey look, it’s pointed-stick Man! Hawkeye may be a bit of a joke in the Avengers Assemble cartoon, but his counterpart in Disney Infinity is surprisingly potent so far. He’s got a number of trick arrows, can dodge like there’s no tomorrow and his figure captures that lethal efficiency quite well. I might have to rethink my opinion on the character after spending some time with him. 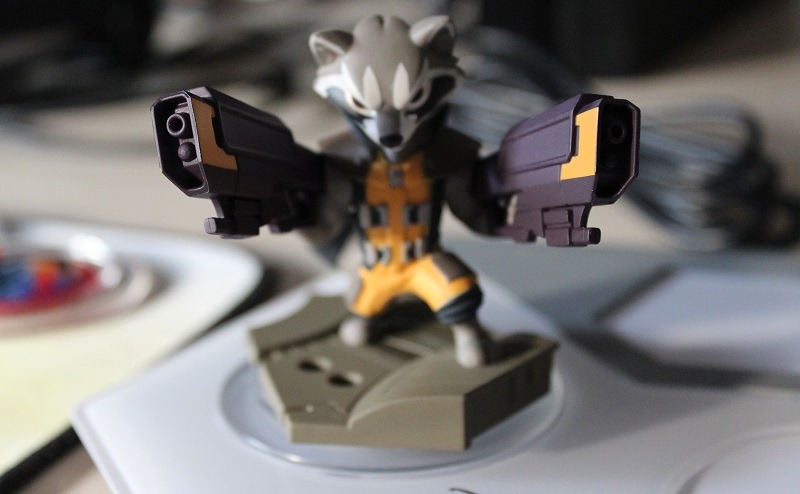 Don’t call him a raccoon! Rocket is pretty much all about guns in Disney Infinity 2.0. He starts out with one over-sized cannon that makes mincemeat of any enemies and Newtonian laws of physics that detail equal and opposite reactions, with an attitude to match. I also don’t recommend leaving him alone with your figures. I came back after a lunch break and one of my Autobot Transformers was missing a leg. 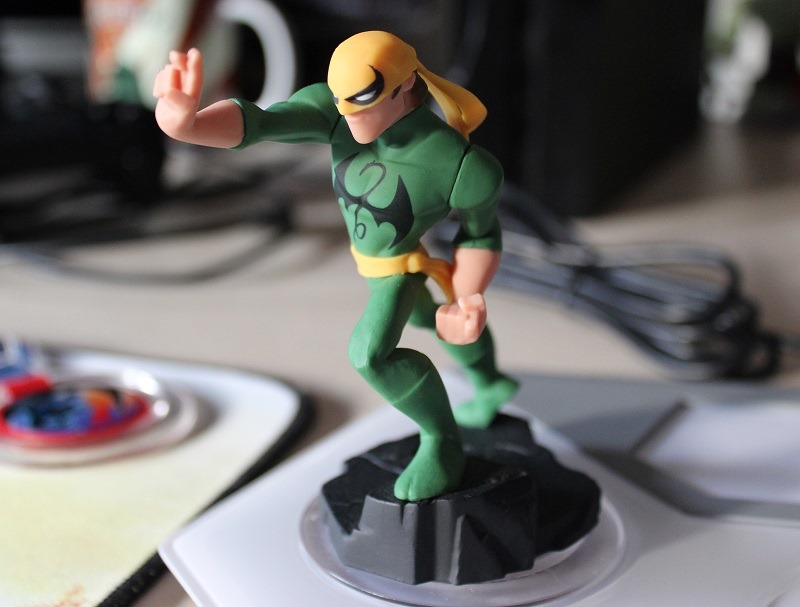 Out of all the figures on offer, Iron Fist may just be the fastest out of all them. He’s got an absurd speed which he applies to his attacks, and his special ability has him pushing through enemies with a fist that is like…iron. He’s Bruce Lee, Disneyfied and given an attack boost to make up for a lack of ranged attacks and low durability. And he may be my favourite in the Spidey set.

Originally, I was aiming to have a full review of the Avengers figures for today. As I realised at 2AM on a Wednesday morning, this was going to be impossible to do without a mountain of Redbull, as the actual core mechanics of the gameplay for these figures have evolved. They start out with generic abilities, but once you spend some time pouring points into their skill trees, the options open up quite a bit. I still want to do figure reviews, and I plan to. So keep an eye out for that, and if you want to see something specific touched on in the reviews, drop me a comment below.