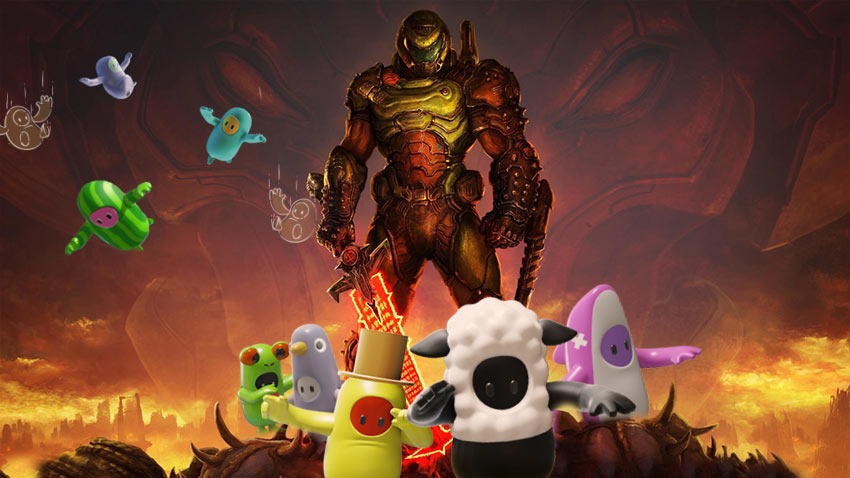 Fall Guys has been a meditative masterpiece for me, as nothing puts a smile on my face quicker than a few rounds of fat jelly beans running amok on a goofy stage. Well that and making Gavin question his sanity when I drop a bombshell about why I won’t eat cheesecake. Cake with a dollop of cheese in it? Gross, I’ll never eat that stuff.

The other brilliant part of Fall Guys has been its customisation, with numerous skins allowing you to dress your bean up in all manner of colourful threads. Some of them have even been licensed costumes, such as the delightful Godzilla costume from not too far back. For the next wardrobe addition though, Fall Guys is looking to a game where the only way to win is to rip and tear your way to victory with a hail of bullets, plasma blasts, and a trusty chainsaw.

Call him Doomguy, the Doom Slayer, or the Doomed Marined, but his threads will soon be wrapped around your pudgy body:

And if you needed any more of a hint that your Fall Guy will be dressed in the finest of demon-slaying armour, then having Bethesda boss Pete Hines responding to that tweet with an emoji should be all the evidence you need. I do hope that the marvelous Doomicorn skin is also added to Fall Guys eventually.

In other Fall Guys news, the game is still going strong! Ten million copies have been sold, the new season is underway, and a bell called Ringus Dingus is on its way. What a glorious age we live in.