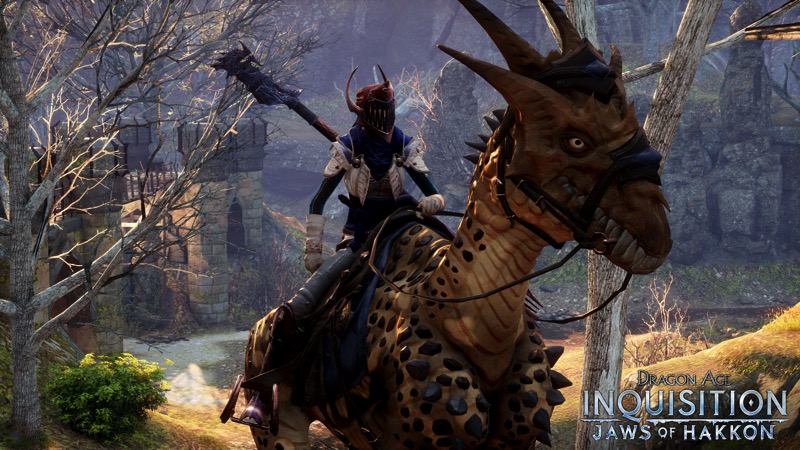 I’ll forgive you for forgetting that Dragon Age: Inquisition, last year’s stellar RPG epic, even had DLC. It’s been ages since Jaws of Hakkon released as a little timed-exclusive package for Microsoft platforms (sorry 360, not you), but if you’ve waited with bated breath you can finally let out a sigh of relief. It’s coming to every other platform, and pretty soon too.

Jaws of Hakkon explores the fate of the last Inquisitor, who mysteriously went missing after fighting a powerful dragon. I’m struggling to see how hunting a massive, hulking lizard translates to a mysterious disappearance, but I digress. The DLC opens up a brand new area in Thedas, with the lush, mountainous area hiding a shadowy, winding undergrowth lying beneath.

The bit of story DLC, which launched on Xbox One and PC on March 24, will launch on PS4, PS3, Xbox 360 and PC come May 26. You’ll be able to download the package standalone for $15, or hit it free if you’ve splurged on the game’s Season’s Pass.

I personally feel no real obligation to dive back into Inquisition, despite the amount of fun I had with it last year. Even though the tale that my own Inquisitor endured in the main game was compelling, I don’t really find anything interested about the history of the order. A piece of DC exploring how BioWare might continue their stake in Thedas might be more entertaining – but there’s nothing like that in the pipeline just yet.

But if you’ve been looking for a good excuse to get back into the swing of Dragon slaying (just after The Witcher 3 launches), then this seems like a good excuse.