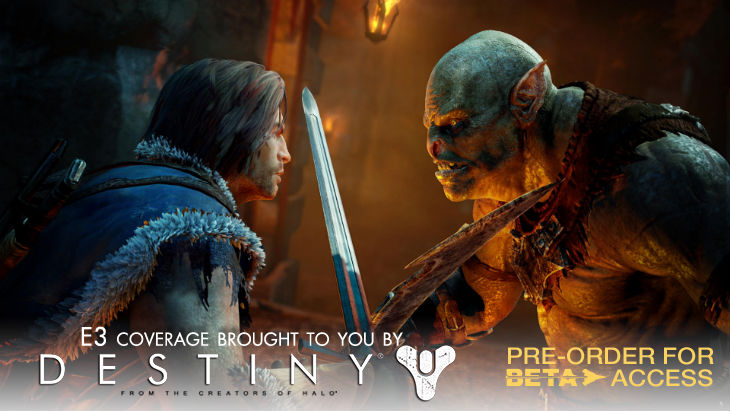 I was really not excited for Shadow of Mordor. It seemed like a bad Batman and Assassin’s Creed clone, and it really didn’t do anything for me. Up until I got my hands on it, that is.

Shadow of Mordor takes place in the period between The Hobbit and The Lord of the Rings. You, the player, are inhabited by a wraith, making you immortal and giving you all sorts of extra powers. During my hands on, I got to go up against the war chiefs in a strange side mission-cum-extra gameplay mode.

Each player will have a unique experience in this regard: Sauron’s Army hates you (of course) and the war chiefs want to hunt you down. In one of the main menus you can access Sauron’s Army and see all the different characters – each one has individual names, traits and characteristics. These will be unique to each player, requiring different strategies to take them down.

When I played initially, I went straight for the one war chief, despite him having two body guards. However, I didn’t realised that one of his traits was being averse to combat. As a result, once I engaged in combat with him, he called in a bunch of minions (and his body guards came running) and he actually escaped. This changed the entire mission structure – two of his body guards actually ended up started duels with other mini-bosses which I could interrupt to take them out or brand them, or leave them to the duel to leave one less mini-boss to battle.

The gameplay is incredibly fluid, following some similar patterns to Batman. However, even in the middle of battle, it was possible to climb and interact with the environment. At points, I made the enemies lose track of me and even released a giant animal into the midst of battle. It feels like the battles are taking place in a real world, not just some sort of instanced open world battle.

Strategy is a key point in this part of the game. You can choose to take out body guards, to brand them to help you in later battles. Even their minions/subjects will be on your side after the branding. Alternatively, you can kill them. Then there is the War Chief himself – each one has specific strengths and weaknesses. I encountered one that was susceptible to stealth; after gaining the high ground I was able to drop down from above and brand him, making him an ally. Others are incredibly difficult, immune to frontal and even rear attacks – one was even immune to being dodged or jumped over, adding a whole extra dimension to gameplay.

The world is massive. During the demo, I was able to make use of fast travel to speed up the process, but it was still an enormous world, filled with wandering droves of enemies, and plenty of resources to use for crafting.

The levelling up system is extensive, showing off a wide variety of skills that can be added or augmented according to the player’s preferred style. Over and above that, there are runes that major enemies drop, adding specific buffs and skills such as regenerating life after defeating enemies or improved attack speeds.

The parkour is excellent in the game – your character can climb almost anything, use stealth or go for a full-frontal assault. The world you traverse with that parkour is so detailed and specific, it goes way beyond what you’d expect from an open-world fantasy game. Each aspect of the environment is rendered beautifully and I didn’t see a single graphical glitch.

Shadow of Mordor was the biggest surprise of E3 for me. It’s now one of my most anticipated games. I’m excited to run around the countryside, branding the opposition and gaining a massive following of minions all my own. I want to parkour and explore, take on my nemeses and see what else the game has to offer. I know that I just played a small piece of the game – even if that were the whole thing it would be intriguing.