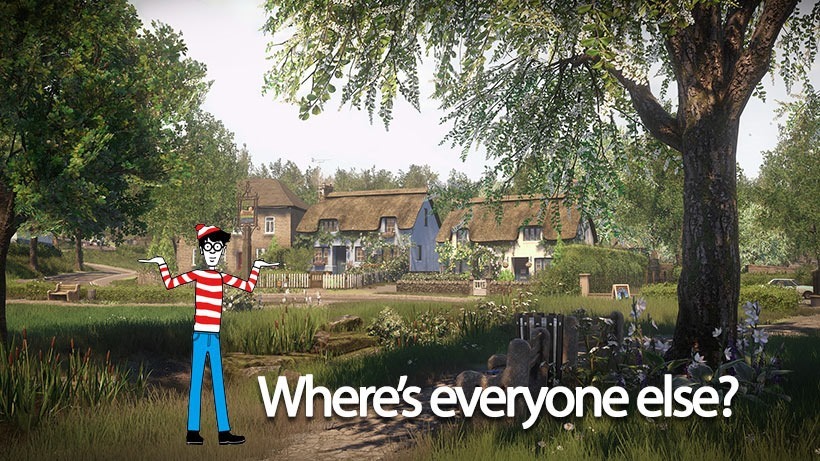 Dear Esther, the breakout hit for developer The Chinese Room was not for everybody – but those who did appreciate its mesmerising scenery and mysterious narrative were spellbound. The game has been called, by many, a walking simulator. If you liked their last walking simulator, you’ll very probably like their newest one – which hits the PlayStation 4 next week.

Called Everybody’s Gone to the Rapture, the game’s set in an apparently abandoned village in Shropshire, featuring what seems to be some rather beautiful CryEngine-powered visuals and what seems to be a compelling, intertwining narrative with a delicious mystery that needs solving.

“Deep within the Shropshire countryside, the village of Yaughton stands empty,” says the game’s intriguing official site. “Toys lie forgotten in the playground, the wind blows quarantine leaflets around the silent churchyard. Down on Appleton’s farm, crops rustle untended, the early harvest abandoned halfway through. The birds lie where they have fallen. A pair of shoes hang from the overhead wires. The windmill continues to turn unobserved. Strange voices haunt the radio waves as uncollected washing hangs listlessly on the line. There is light in the wires. The televisions are tuned to vacant channels. Above it all, the telescopes of the Observatory point out at dead stars and endless darkness. And someone remains behind, to try and unravel the mystery.”

It’s certainly not for everyone, but it’s something that I’m certainly looking forward to. Here’s the game’s launch trailer. It’ll be coming exclusively to PlayStation 4 next week, retailing for $19.99. PlayStation Plus subscribers get a 20% discount, and those who purchase within the first two weeks get a free PS4 theme.