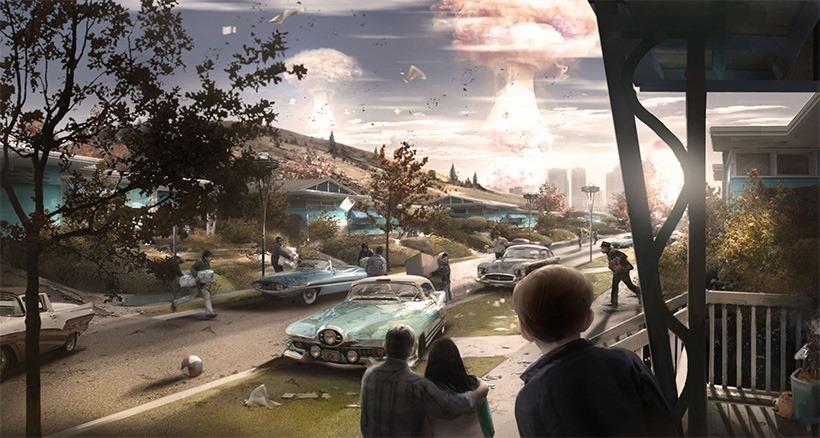 According to those who’ve actually managed to get hands on time with Fallout 4 (or gotten to look, really, really closely at it), the game is very familiar – perhaps a little too similar to Fallout 3. It looks and plays much the same as that game, with a bit of new-gen shine and the much-vaunted, Minecraft-esque crafting system.

There’s more to it than that though; according to Bethesda’s Pete Hines, it’s got a completely different tone. Where the grey and bleak Fallout 3 was about people trying just to survive in a post-apocalyptic world, Fallout 4’s citizenry feels a little more hopeful; a world that’s collectively reached the acceptance bit of the Kubler-Ross model.

“There’s this notion: ‘this is our home’. This is where we live,” he told OXM via Gamespresso. “It doesn’t matter what it used to be like before. We’re not going to rebuild the world like it used to be. This is just what life is like now. I’m not ever going back to the Saturday morning with the nicely mowed lawn and the white picket fence. That world is gone, this is what life is like now.’

And so there is a bit of a vibe that you get from the game, more a sense of normalcy. This is now what normal looks like. This is now what life looks like. Whereas in Fallout 3 you had a little bit of the bleak and the feeling of hopelessness, and the main quest had to do with trying to restore some hope to it. This game has gone past that, and it’s levelled out.”

Fallout 4 is out in November this year, and with mods coming to the PC and console versions this time, is something many will be playing for years to come.