Home Gaming FFD: Do you identify as a “gamer?” 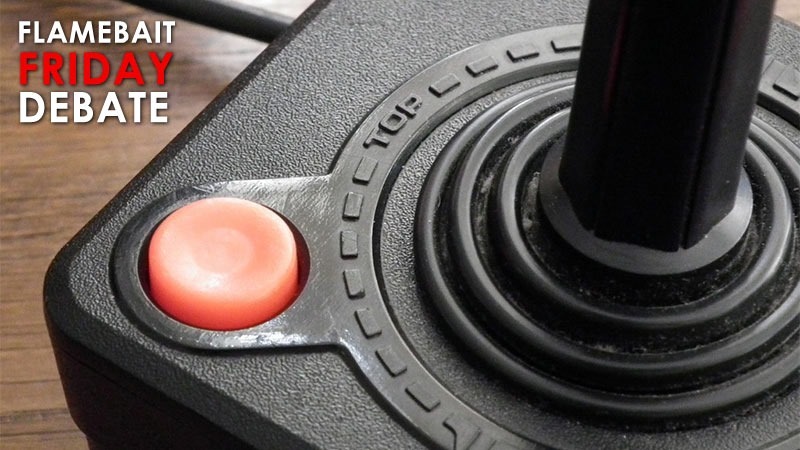 This week and last, the whole Gamergate scandal – and the actions of others who identify themselves as gamers have me wondering if being a “gamer” is anything to be proud of.

For whatever reasons, the people who identify themselves as gamers are rising up against the people who make games, and the people who spend their lives writing about them. – with a muddied plethora of arguments that flip and flop from game journalism’s credibility to misogyny and the lack of diversity in gaming as a whole.

It started with angry ex-boyfriend releasing private information about a female game developer, Zoe Quinn. That was followed up with claims that games journalism was fundamentally corrupt and it all went downhill from there, perpetuating a sort of “Us vs Them” mentality between gamers, games press and game developers; people who ought to really be on the same side.

Anita Sarkeesian’s latest Tropes vs. Women video exacerbated it all, with much of it coming to a head when gamers’ threats of violence drove her out of her home. Ms Sarkeesian is a controversial figure sure – but even if you disagree with her there’s no need for anybody to act that way. I’m digressing though; I don’t actually want to delve too much in to Gamergate. At this point, it’s like shouting at a storm. For a level-headed and frankly excellent look at the situation, go here.

There’s a large number of gaming press now that have taken umbrage with the label “gamer,” saying that it’s a dead term, or something we should leave behind.

As if by some sort of pre-determined conspiracy, game journalists the world over have declared the gamer dead. From an excellent piece on the subject by Slate:

Such articles appeared concurrently in Gamasutra(“ ‘Gamers’ are over” and “A guide to ending ‘gamers’ ”), Destructoid (“There are gamers at the gate, but they may already be dead”), Kotaku (“We might be witnessing the ‘death of an identity’ ”) andRock, Paper, Shotgun (“Gamers are over”), as well as Ars Technica (“The death of the ‘gamers’ ”), Vice (“Killing the gamer identity”) and BuzzFeed (“Gaming is leaving ‘gamers’ behind”).

If you’re to believe any of those, “Gamer” is a now a dirty word. I think the gamer identity is still something that’s important. I want to still be proud to call myself a gamer. I think gamer culture is important. The thing though is that gamers are still people – and within any subset of people, you get massive jerks. They’re the ones who’re making us all look like rabid idiots.

Right now, I’m still going to call myself a gamer. It’s an identity I’ve had my whole life, and it’s one I plan on keeping for years to come. I’m proud to be a gamer – even if I’m not so proud of some of the things people sharing that identity have done.

Are you a gamer? Do you identify as a gamer?  Has this whole storm of controversy and unbridled hate made you want to identify less as a gamer?

So long as you have the cash to flash, the industry doesn’t care who you are, which is a f…