Home Gaming First look at “cool and mature” Dead or Alive 6, which is making the franchise more accessible and less “sexy” 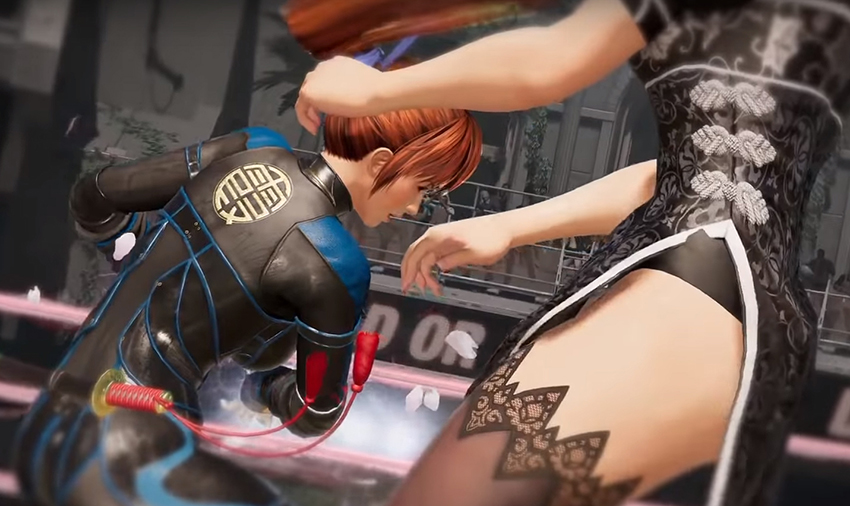 Fun anecdote: Way before I ever became friends or even colleagues with Geoff, we met online randomly in a match of Dead or Alive 3. It was my very first experience with online fighting games and I can’t recall exactly who won the match (I’m going to say it was me, based on the fact that Geoff is currently in Los Angeles and can’t defend himself) but I can tell you that it was the beginning of me sinking countless hours into the DOA franchise. A franchise that was unfortunately soured by developer Team Ninja’s pervy Xtreme Beach Volleyball spinoff games and use of the game’s trademark “soft engine” which basically made the female characters’ bits jiggle. It was immature and drove away some players, myself included.

However, Dead or Alive is back, as revealed by IGN with a brand new trailer over the weekend at E3 featuring returning characters Ryu Hayabusa, Kasumi, Hayate, Helena, Jann Lee and Zack. What’s more, DoA 6 is getting some neat changes in the form of player damage models – characters will bleed and get bruised by action – as well as having characters sweat and show exertion during a match.

A pretty big deal though is that Team Ninja is trying to change the game’s image back to a “fierce fighting game” and as such all the boob and butt jiggle physics have been toned down drastically. Female characters like Helena and Kasumi will also no longer be dressed in highly exposed slips of clothing, but actually wear practical costumes now. The female characters will also take damage, a first for Team Ninja who had intentionally avoided depicting physical injuries on their female roster, but now want to show that “The female characters are still attractive, as are the men, but first and foremost they are fighters”.

Speaking of fighters, along with six new characters, Team Ninja is also introducing some brand new game mechanics in the form of Fatal Rush and Break Gauge, powerful attacks that use very simple commands to execute. Chatting to IGN during a hands-on gaming session, producer/director Yohei Shimbori explained a bit how these new systems, which uses the new Special Button (R1 on PS4, RB on Xbox One) came to be.

In Japan, there is a game for kids where you make two sumo wrestlers out of folded paper or cardboard, place them on a platform, and two players tap the platform repeatedly with only one finger until one of the sumo figures collapses in defeat. Today, games developed for smartphone devices are often played with similar simplicity. That made me want to create a fighting game playable with only one finger, and this idea became the foundation of the new Special button.

So how this works in practice is that by just hitting the Special Button, which Shimbori calls the “rescue button for beginners”, players can perform up to a four-hit choreographed combo called a Fatal Rush. Break Gauge introduces a super meter for the first time in franchise history, and filling it up – either through dishing out or taking damage – allows players to “perform either the Break Blow, which is a flashy and highly destructive special attack, or the Break Hold, a useful counter attack that deals low damage but works against high, low and mid attacks”. Both are performed by just pressing the Special Button and either backwards or forwards respectively.

If that sounds very simplistic it’s because it is, as Team Ninja are trying to make the traditionally complex game more accessible. But just because there’s now an option for beginner players doesn’t mean the old systems are gone. In fact, spamming the Special Button moves over and over again can get you easily countered by opponents who know what they’re doing.

Also getting a new rework are the game’s arenas. Traditionally in DoA games, these would involve crazy and over the top transitions from one area of an arena to the next. This could involve “surfing” your opponent down a long set of temple stairs or even bouncing them off a helicopter. However, for DoA 6, the arena interactions can be a lot more muted and realistic now, like having a crowd around a fight jostle and knock down your character when they got too close. Not to worry though, for those of you who want to send your opponents flying through buildings, I said arena interactions “can be” more realistic, not that they all will be as Shimbori confirms that they will still have some of the old crazy interactions as well.

And it’s that combination of sticking to the crazy over the top roots of DoA but also refining everything for a modern age that has me pretty excited for Dead or Alive 6.

The game will look more realistic, but we have no intention in changing the sci-fi-fantasy atmosphere with ninjas, clones and whatnot. In the real world, not even the strongest fighter can survive falling off a skyscraper, but that is what makes Dead or Alive so much fun. The new sense of reality will come in handy to make this over-the-top fighting more convincing.

Dead or Alive 6 will be releasing on PS4, Xbox One and PC via Steam in early 2019. Maybe I can challenge Geoff again when it’s out.