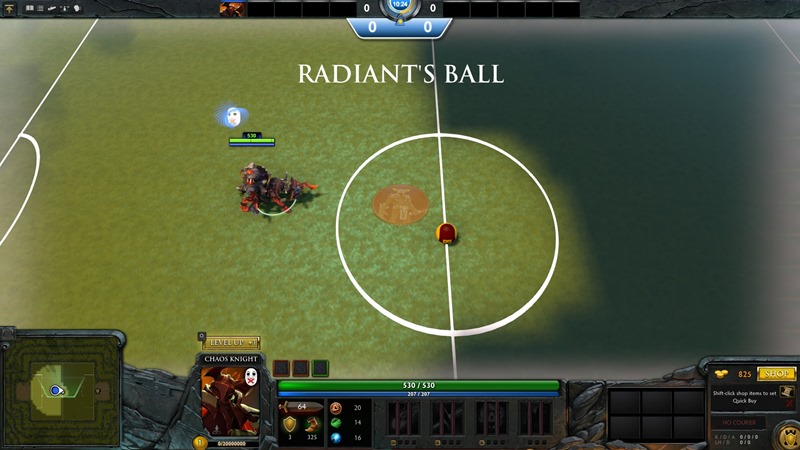 Believe it or not, I used to play football back in my golden years. I’m not the hugest fan when it comes to watching the sport though; there are too many people dying, then respawning conveniently after the ref has awarded the free kick. Still, I did enjoy playing it, and I often miss doing so. If only I could somehow get back into it… if only there was some way to marry my passion for gaming with the kicking of the ball…

No, I’m not particularly interested in FIFA. I could really use something that is far more entertaining (#shotsfired) and more in line with my personal gaming interests. Thankfully, the internet gods have been listening, and have chosen to give me a mod for my favourite game. Say hello to Dota Soccer!

That’s right. I can forget about killing the enemy ancient, and can focus on scoring goals instead. This isn’t the first time I’ve heard of such a mod. Another I know of lets you do the same. It swaps the ball for Wisp, and all the heroes for Earth Spirit – which makes sense because his abilities allow him to hit and pull objects. Dota Soccer is different in the sense that all heroes are available with all their respective abilities. These abilities can be used on enemy heroes, or the ball itself (Kotaku via Dota Soccer):

All abilities can be used on other Heroes like normal, get creative and use your abilities to stun or move enemies out of the way, or stealth and blink your way into the ideal position to strike! A good team composition; finding the balance between fighting your enemies and moving the ball well will be the key to victory.

The mod is still in alpha, but the developer has a ton of extra content he still wants to add. Enemy kicking you a bit too hard? Check out the items you’ll be able to buy at some stage…

Short-shorts? Sounds like a legit item! The mod genuinely sounds like a lot of fun. I can finally marry the concept of Dota 2 heroes to famous football players. I look forward to playing as Crystiano Maiden Ronaldo, Lion-el Messi, Dazzle Beckham, Luis Slarez, and Diego Rikimaru-donna.

The mod can be downloaded right here. Who will you be playing as? Let’s see those Dota 2 hero/football player hybrid names fly!