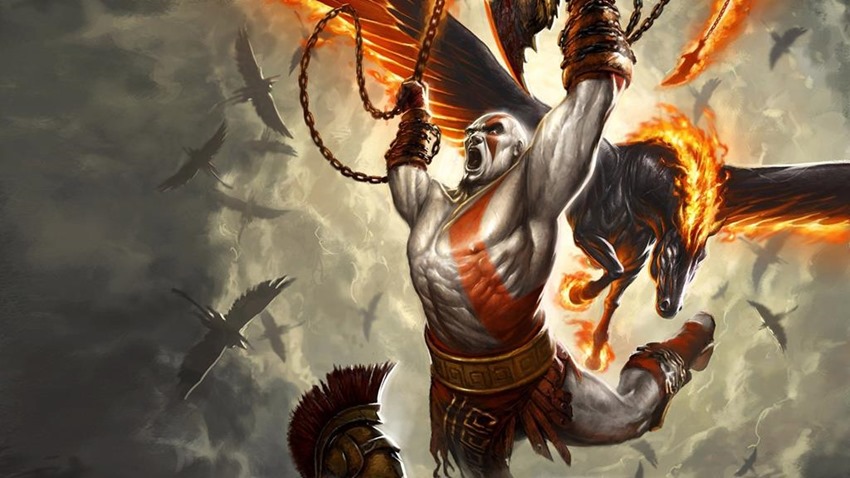 Whatever you do, don’t call it a remake. This year’s God of War may be a fresh start for the series that made deicide popular, but it’s a game that still has plenty of history attached to it even if it doesn’t explicitly mention it. Just who is Kratos? Why is his skin paler than a Batman villain? Just where did he get that magnificent beard from?

At least two of those questions will be answered below, in a condensed summary of the infamous Ghost of Sparta. If you needed a quick refresher course on God of War ahead of his return to PlayStation, then buckle up and wrap the chains of chaos around your arms as we descend into the underworld history of one the most savage heroes in video game history. 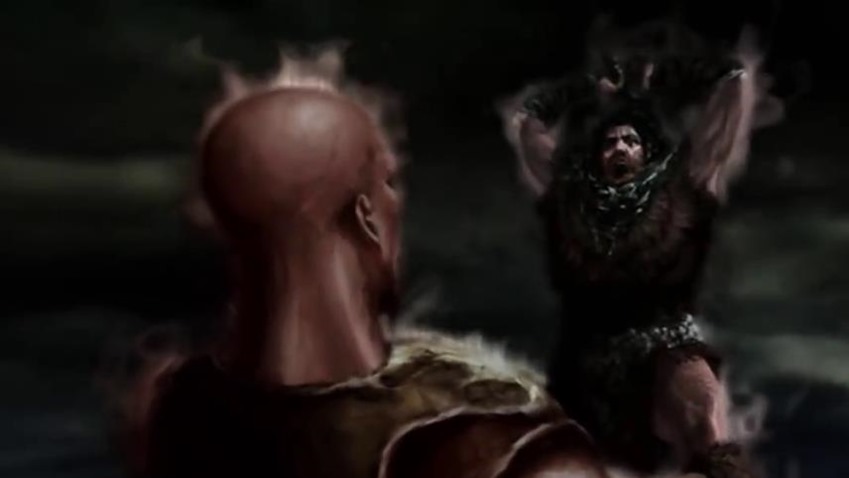 An ancient battlefield, drenched in the blood of thousands. Outnumbered and about to be slain by the superior Barbarian hordes of General Alrik, Spartan warrior Kratos strikes a deal with the Greek god of war Ares:

ARES! DESTROY MY ENEMIES AND MY LIFE IS YOURS!

Obliging the bloodthirsty warrior, Ares wipes the battlefield clean of enemies and binds the blades of Chaos to Kratos. It sounds like a bargain deal, as Kratos serves Ares and starts a new campaign of war in servitude to the god. UNTIL ONE DAY! Slaughtering his way through a village of Athena’s followers, Kratos awakens from his blood rage to discover that he has done the unthinkable: He has murdered his wife and daughter. 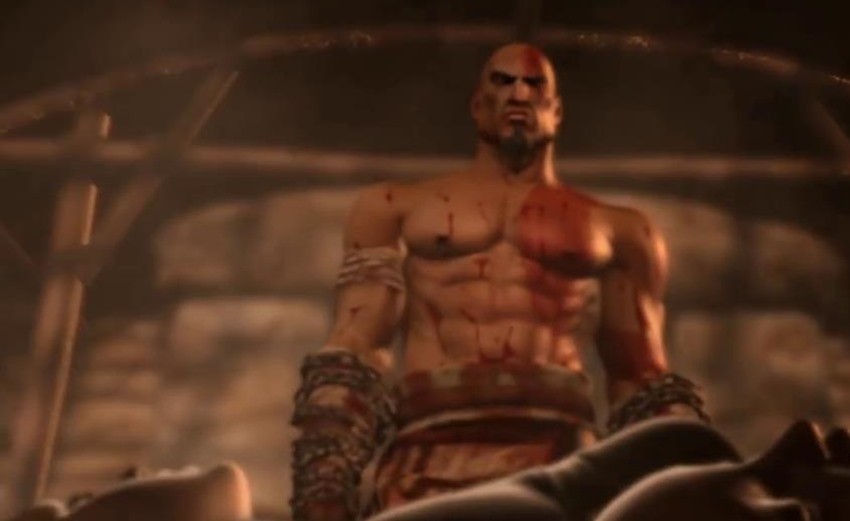 Tricked by Ares who wished to sever all Earthly attachments from his chosen avatar, Kratos found himself cursed and forced to wear the ashes of his slain family. Furious and hellbent on revenge, Kratos would renounce his loyalty to Ares and embark on a quest to slay the war god. But Ares would not forgive 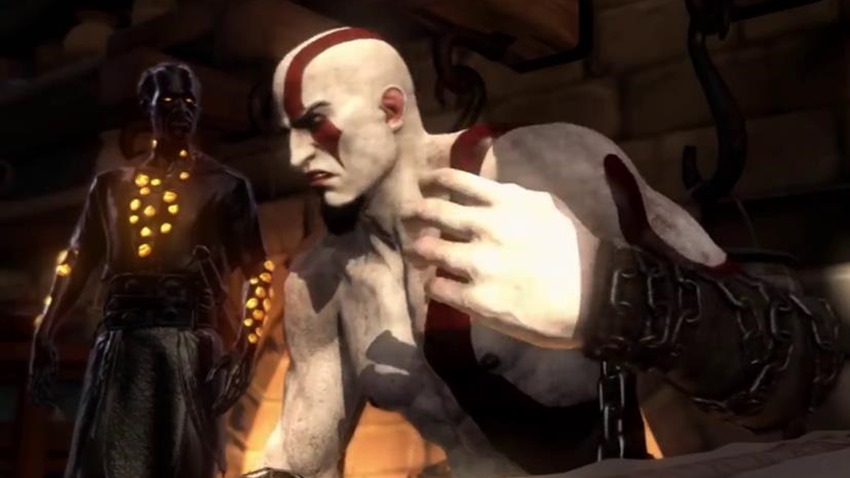 Right, so Ares wasn’t too pleased with Kratos renouncing his name and then decided to unleash the power of the Furies on him. Hunted down and captured by the trio of Furies, Katos finds his mind tampered with and his memories altered when he encounters the Orkos the keeper of oaths. Giving Kratos a mission to find the Oracle of Delphi and rediscover his true memories. 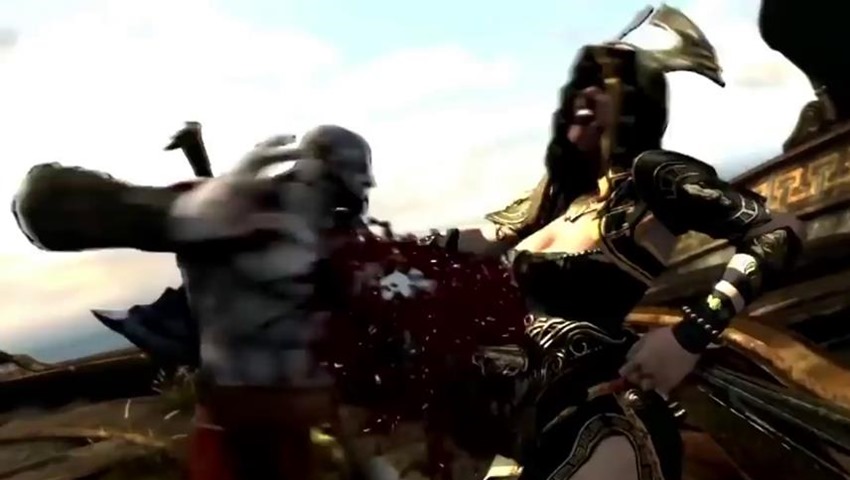 To do just that, Kratos is tasked with killing not only the Furies but also Orkos. With the death of the gentle oath-keeper, Kratos finally uncovers his true memories, plunging into despair as he remembers with vivid detail how he murdered his family. Now deadset on removing these memories once again, Kratos pledges his loyalty to Athena as he embarks on a quest to topple the Greek Pantheon.

God of War: Chains of Olympus 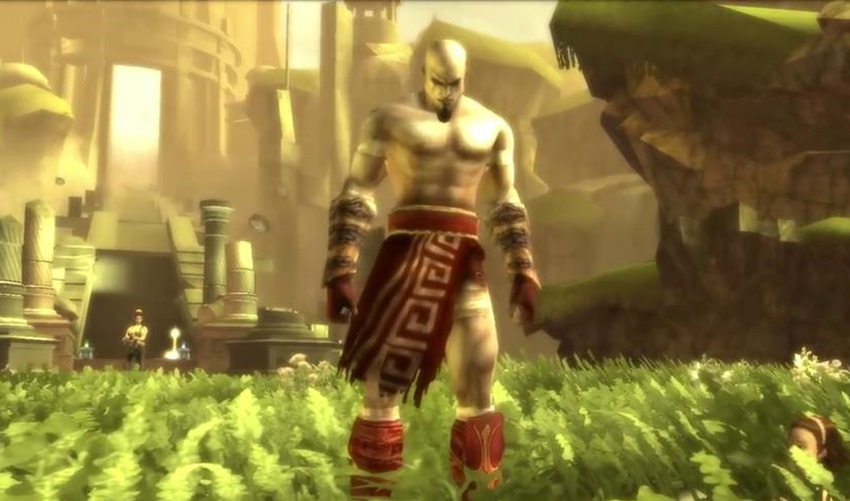 Kratos’ first mission finds him tangling with the wife of Hades, Persephone. Slightly peeved that she rules over a kingdom of the dead in her forced marriage to the god of the underworld, Persephone plots to disrupt the balance of the world by destroying the pillar that supports all life. Tasked with stopping the queen of the dead and the Greek god Atlas, Kratos is forced to forsake his family in the underworld so that all life can be saved.

Persephone soon falls, Atlas is chained to the Pillar of the World and Kratos spends the next decade serving Athena. 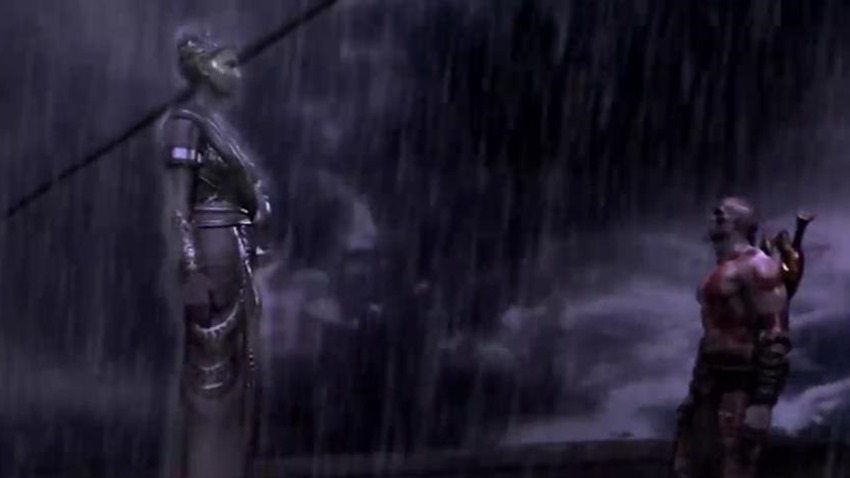 Which works well enough until Kratos gets fed up with serving the gods, due to the fact that he still suffers from the nightmares that he wishes to rid himself of. Athena then strikes a deal with Kratos: Kill Ares, and she’ll strip him of the memories which have broken him. To kill a god, Ares embarks on a quest to obtain Pandora’s box, one of the few artefacts that house the power to kill a deity. 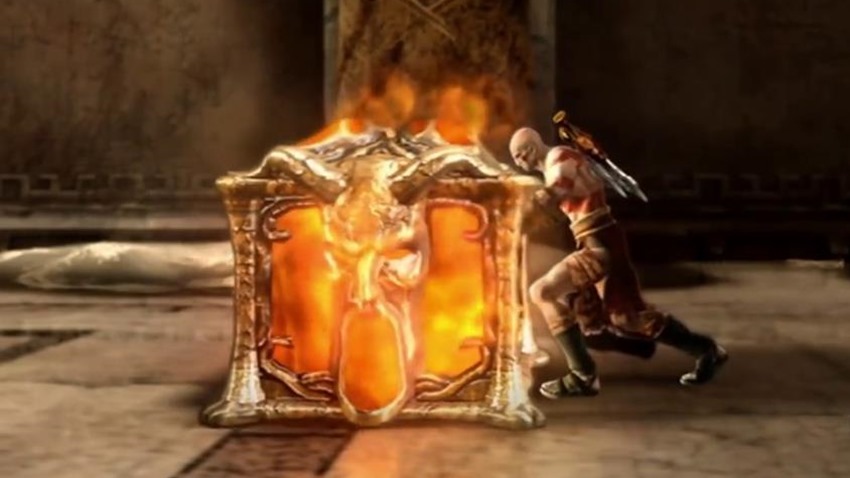 Before Kratos can unleash that power however, Ares throws the warrior into the underworld. Battling up and out of the realm of the dead, Kratos eventually opens Pandora’s box, slays his own inner demons and uses the power inside to kill Ares. His end of the bargain kept, Kratos finds himself betrayed yet again when Athena refuses to honour their deal. 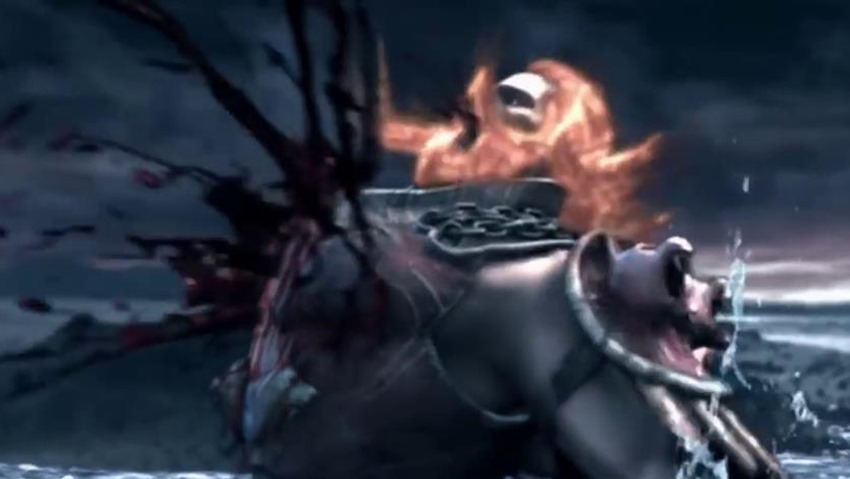 Instead, Kratos is given the throne of Ares, becoming the new God of War.

God of War: Ghost of Sparta 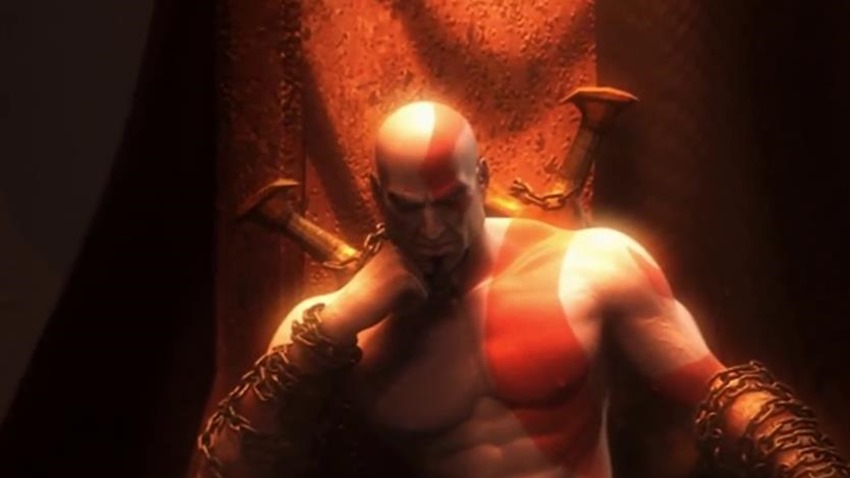 Set between God of War I and II, Kratos embarks on a quest to find his brother Deimos. Feared as the harbinger of destruction that would eventually befall Olympus, Deimos was kidnapped by the gods so that this apocalypse could be prevented. In his journey to reunite with Deimos, Kratos succeeds in sinking Atlantis, killing his own mother, various monsters and the god of death Thanatos. 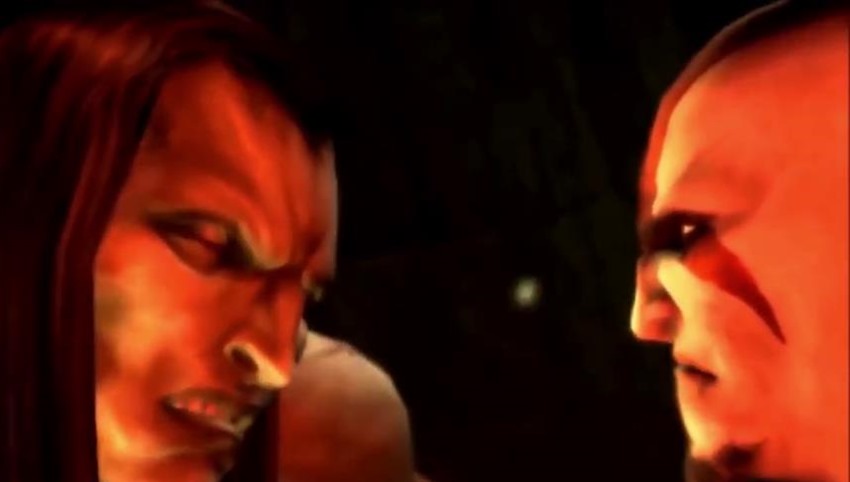 During the conflict, Deimos dies and Kratos is left without any earthly attachments. Attempting to use this as a way to transform the ghost of Sparta into a true Olympian God, Athena’s efforts are instead rebuffed as Kratos promises vengeance on the entire pantheon. 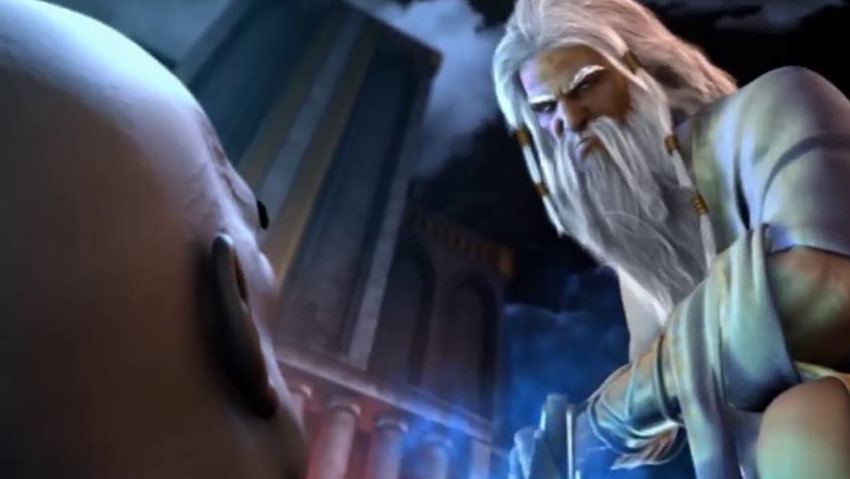 Which Kratos got to work on, right away. Now fully powered as the titular god of war, Kratos cut a swathe of devastation across ancient Greece. Athena attempts to stop his rampage by sending the Colossus of Rhodes to battle him, while Zeus offers Kratos the Blade of Olympus. The only catch? To stop the empowered Colossus, Kratos has to transfer all of his godhood into the blade and use it to strike the golem down.

Successful, a now mortal Kratos is murdered by Zeus and sent back to the Underworld. Escaping yet again, Kratos recruits the Titan Gaia to assist him in his mission for revenge. Tracking down and murdering the Sisters of Fate, Kratos uses their power to travel back in time to the moment where he was killed by Zeus, using the Blade of Olympus to wound the god before he can betray him.

At this point, Athena joins the battle and sacrifices herself in an attempt to save the gods from destruction and the never-ending cycle of sons killing their fathers. Athena also reveals that Kratos is the son of the Olympian king, and succumbs to her injuries as the lightning deity escapes. Kratos travels once again to the past, brings the Titans back with him and begins a journey towards Mount Olympus… 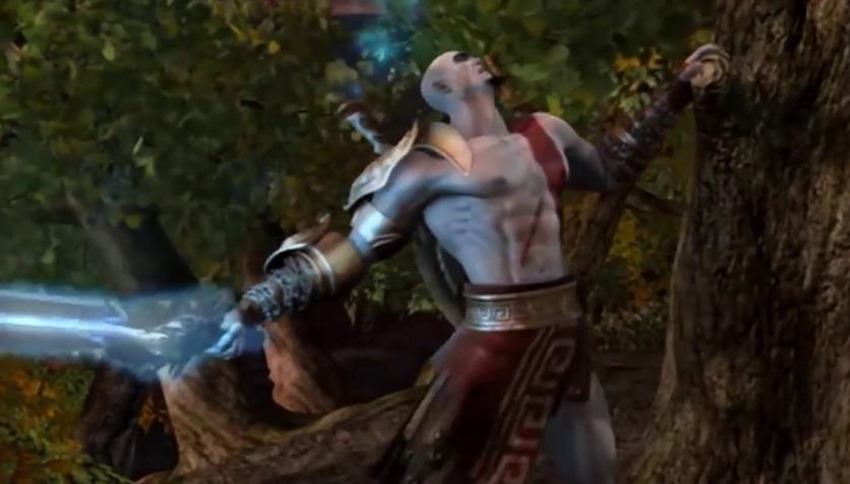 ZEUS! YOUR SON HAS RETURNED! I BRING THE DESTRUCTION OF OLYMPUS!

Kratos finds his revenge-quest cut short yet again when Zeus slays him, sending him back to the underworld. This time ridding himself of the spectre of death by killing Hades, Kratos uncovers a way to kill Zeus for good: Recover Pandora’s Box on Mount Olympus, by using Pandora herself to extinguish the flames of Olympus which safeguard the god-killer.

Kratos then murders the rest of the Greek Pantheon in increasingly brutal showdowns (Hermes has legs severed, Apollo has his head ripped off and Hercules is beaten to death), eventually reaching Zeus and allowing Pandora a chance to sacrifice herself so tat the box of evil can be opened. Instead, Kratos finds an empty box whose contents escaped when he first opened it in his mission to slay Ares. 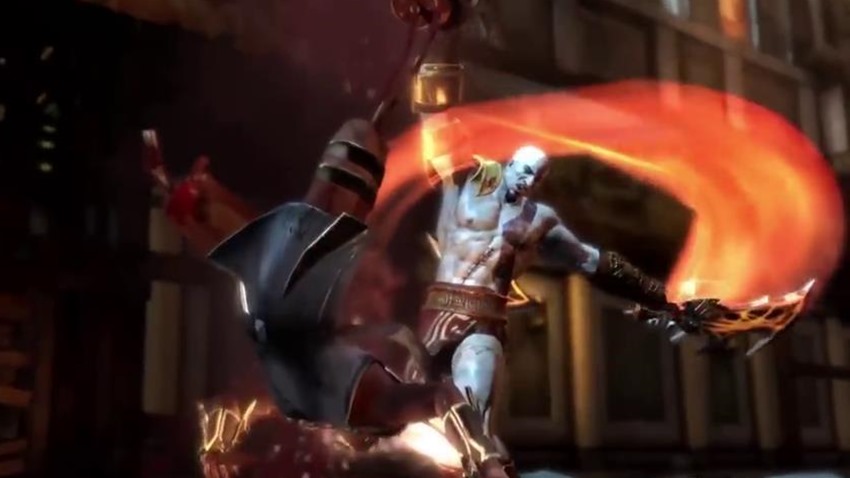 It was those very evils and sins which proceeded to infect the gods, and set the events that Kratos found himself caught in, in motion. In one of her final acts before she was killed, Athena left Hope in the box, which was then transferred to Kratos. Using this, Zeus is finally slain and Athena’s ghost appears before the Spartan in an attempt to take back Hope and use it to rebuild humanity with her on the throne of Olympus. 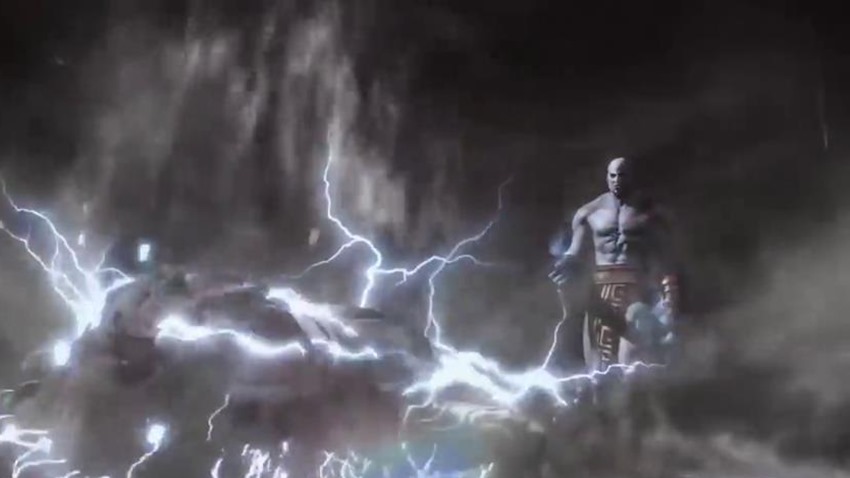 Kratos decides to sacrifice himself instead, restoring Hope to humanity. With the Blade of Olympus enfused with the power of Hope, Kratos uses his own body as a conduit and throws himself upon the sword as humanity is once again given a chance at survival. Having conquered death, Kratos survives the act and leaves Greece as he seeks a new land devoid of any gods who would meddle in the affairs of humanity…