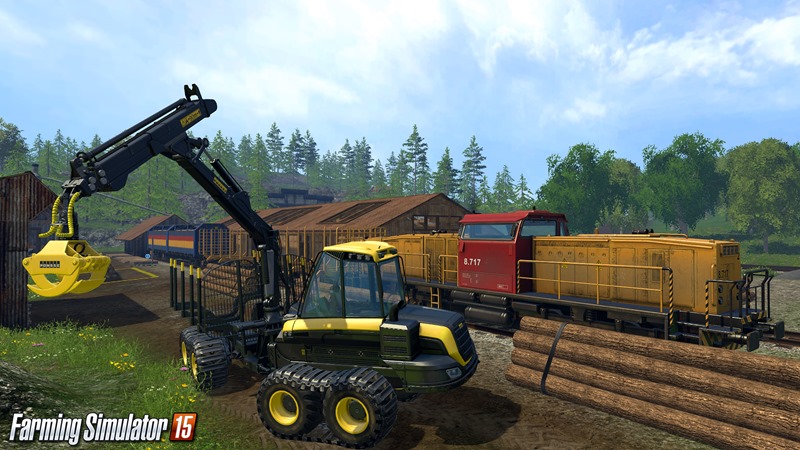 You know, I really enjoy farming*. It’s a timely process which may seem tedious, but is really rewarding in the long run. Those high tier items aren’t going to buy themselves you know! Oh wait, I was talking about another game which some readers fondly refer to as cabbage (coincidentally enough). This article isn’t about that though, it’s about real farming.

That’s right, grab your pitchforks! No… we aren’t rioting or forming an angry mob, we’re getting ready to dive into Farming Simulator 15. The game has received a release date – October the 30th for PC. It will also be arriving on the PlayStation 3, PlayStation4, Xbox 360, and Xbox One, but only in early 2015. Here’s what you can expect (Focus Home via Polygon)

Sticking to the recipe that has so far proved such a smash hit (over 2 million units sold on PC and consoles with the previous 2013 version), the Farming Simulator franchise will be entering, in October, in a new era!

A new graphics and physics engine, new visual effects, a new interface, new gameplay mechanics, new vehicles and, of course, a new and vast game environment…Farming Simulator 15 combines all the right ingredients to offer the richest and most detailed farming experience ever, coming to PC on October 30! Console players may rest assured that they have not been forgotten: the game will also release onPlayStation®4, PlayStation®3, Xbox One® and Xbox 360® early 2015.

Hang on one second… 2 million units sold? Holy corn cobs Batman, that’s a lot of virtual farming taking place! I’ve never played the game myself, but I can only imagine how mindlessly addictive it must be.

Here’s the official reveal trailer, filled with over the top happy music which makes me feel like farming can make the world an infinitely happier place.

Is this game something that would appeal for you? Or is it strictly suited to the casual market?

*For those of you who don’t know, I was referring to the ‘farming’ that takes place in MOBAs, where a character spends a lot of time killing creeps to earn gold to buy items.

My Time at Sandrock, a sequel to My Time at Portia, launches into early access next year