Home Features Hands on with Far Cry 5, Ubisoft’s most streamlined sandbox shooter yet 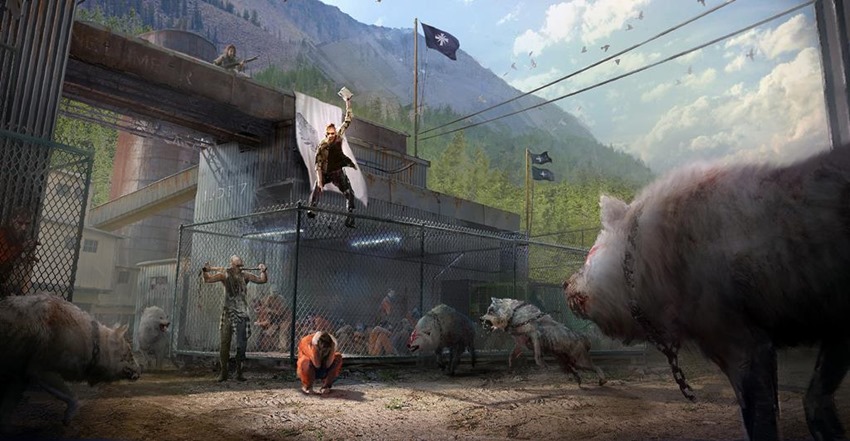 Crush maniac cultists using everything at hand, recruiting anyone that’ll help. We start at the very beginning this time out, from the moment a weary local Sheriff spells it out plain and simple for his silent rookie deputy, and a stony-faced US Marshal declares that the law is the law. We’re in a low-flying copter, skimming over Montana, nervy as hell.

The Project at Eden’s Gate compound – a small scattering of buildings, with a Christian chapel its focal point – appears disquieting from the air. It could be harmless, but we’ve already gained insight into what’s really going on down there: brutal, militaristic enforcement of a misguided religious fundamentalist, Joseph Creed. 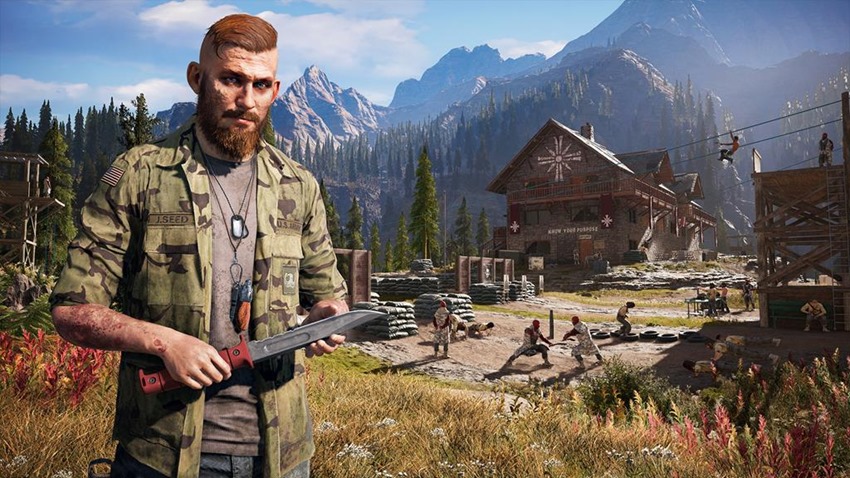 Possibly it was the hidden camera in the congregation,revealing to the world what happens to anyone that crosses Creed, that made up the reluctant Sheriff’s mind. Creed is capable of mutilating his own parishioners by his own hand. His followers are similarly murderous in their devotion to their ‘Father’. Remarkably, as the team quietly opens the chapel doors to apprehend Seed, the song Amazing Grace drifting beautifully among the congregation, Seed offering no resistance. He denounces them and their mission, claiming God will protect him.

It’s the strangest feeling to begin a game with the ultimate evil, the ‘last boss’, in custody, your hand resting on his bare shoulder. The intimacy is eerie. You expect that this can only go badly wrong, and it does. Ubisoft toys with our expectations a while longer as we launch into the game proper, and we don’t want to ruin this for you. Let’s just say that what appears to be an easy way out swiftly goes south yet again, leaving our deputy (which you can create as male or female) to start a local revolution from the ground up, mentored by an older, wiser guy named Dutch.

We learn four ways to strike back, and battle our way through to get a clear shot at, Creed: rescuing civilians; destroying cult property; completing missions and liberating cult outposts. Our sole concern for this hands-on session is to disrupt Jacob Seed’s combat training efforts in the North, amid the Whitetail Mountains. However we’re also aware that fellow siblings Faith and John have operations East and West, besides the Henbane River and through the Holland Valley respectively. All these problems need resolving. It’s a mammoth operation. 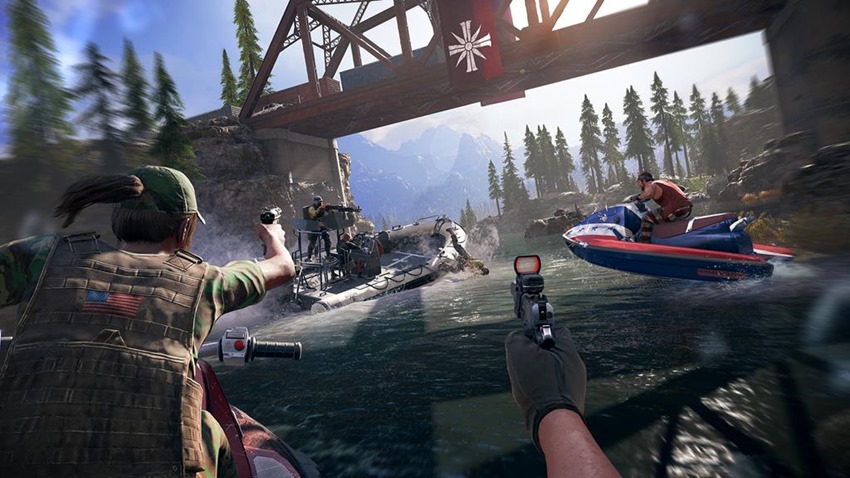 Two things stand out while playing Far Cry 5 in the solo campaign, both are very welcome: Ubisoft is clearly aware of the issues that became an annoyance in previous iterations, and occasionally self-consciously calls them out. “I know what you’re thinking,” says Dutch. “I ain’t gonna have you climbing towers all over the county.” The new, more organic mission structure, which grows from conversations and discovery through exploration, rather than dropping dozens of meaningless waypoints on a map to begin with, works brilliantly well.

The second, and equally important point, is that gunplay and agility seems much snappier than before. Larger weapons have greater heft, while aiming doesn’t seem as unwieldy.The sum total of all this is that Far Cry 5 feels much livelier, and therefore lighter somehow. It’s a lot of fun, compared to much heavier going (if we’re being honest) slogs in Far Cry 4.

In broader terms, there’s a lot that is familiar too – though series fans may prefer to call this reassuring instead. Seed’s followers terrorise the mountain roads, driving scruffy saloons, flat-bed trucks and delivery wagons that serve as moving targets if you’re well equipped. Jacob Seed’s outposts are well guarded, with enemy archetypes to systematically break down before rescuing the hostages inside. 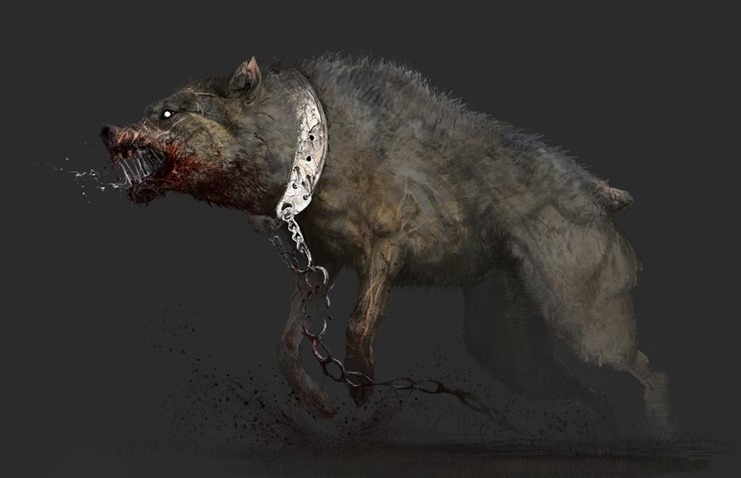 Those liberated become your Guns for Hire, which is much the same as before too. Ubisoft ups the ante, however, with Friends for Hire, who’ll walk you through key missions, and Fangs for Hire – specific animals that have been tamed and which can be summoned, such as the wildcat Peaches ‘The Feline Powerhouse’ and Cheeseburger ‘The Fearsome Grizzly’. Your friends, which include the barely domesticated wildlife, each serve a strategic purpose. It’s no longer a simple case of requiring back-up. 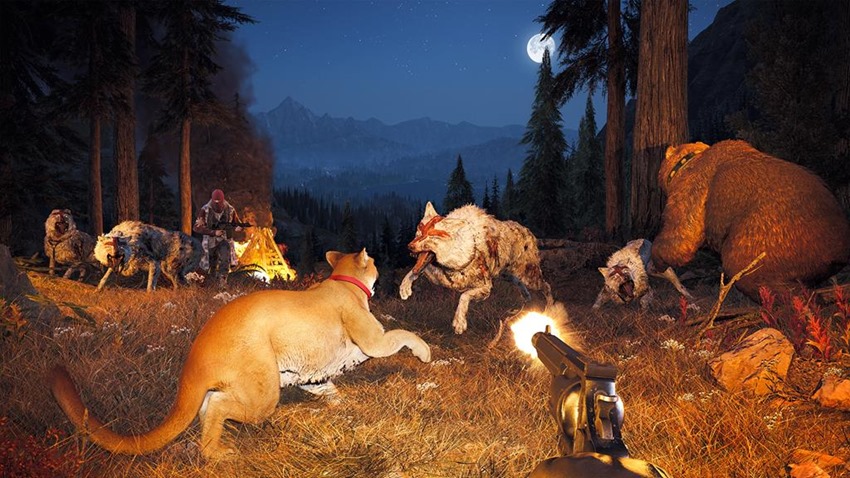 Our session drew to a close with another taste of co-op, chaotic with an unfamiliar buddy. The need to communicate, though, highlighted the different ways that missions could be approached, expertly nailed or catastrophically blundered. There hasn’t been much in the way of co-op blockbusters lately, so the hilarity is good to see back. We located, tamed and defended a new grizzly accomplice with a certain flair, plenty to talk and laugh about later.

All things considered, then, Far Cry 5 comes across as a project that Ubisoft has revelled in making. It is brave in handling some disturbing themes, and boldly presented in every way. It’s an experience that we are praying to get to our hands on again, as soon as possible.