Home Gaming Hearthstone’s most broken card is getting nerfed 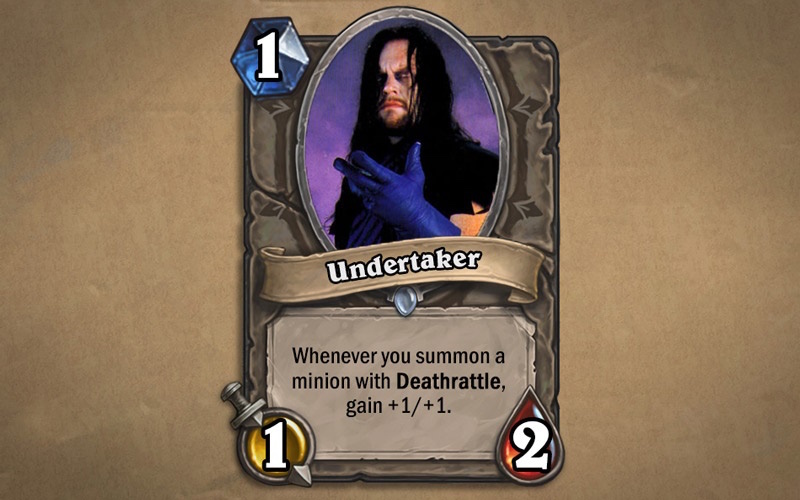 Hearthstone has been a roaring success for Blizzard, which only multiplied tenfold when the game finally reach iOS and Android last year. It’s the perfect game to play when you should really be doing some studies, or work, or basically anything productive. It’s digital crack, but it’s still undermined by some incredibly unbalanced cards. The most unbalanced one though is getting a major nerf.

The Undertaker (not to be confused with the real guy) has been a thorn in thousands of Hearthstone players’ sides for a long time. The one mana creature gains an an extra point in attack and defense every time another creature with Deathrattle is summoned, making him particularly pesky if drawn as the game begins. In cases like that, he snowballs out of control, and makes the game virtually impossible for opponents.

Blizzard recognize that playing against the Undertaker is just not fun, and that goes against everything Hearthstone stands for. So in a new patch set to launch next week, the Undertaker will be nerved quite heavily. Instead of going buffs in both attack and defense, The Undertaker only gets a bump to attack damage. This means there’s far more strategy around keeping him on the board, as well as more viable options to remove him.

Blizzard is also not going to punish players who jump of the bandwagon too late. Anyone who crafted gold or normal versions of Undertaker will be able to disenchant him for the same return. That’s only for a limited time after the patch goes live, so you’ll have to decide fast if he’s still viable in the meta or not.

Hands up if you’ve ever been subject to the Undertaker and his incredibly broken mechanics. I’m glad to see Blizzard have finally caught up with him.