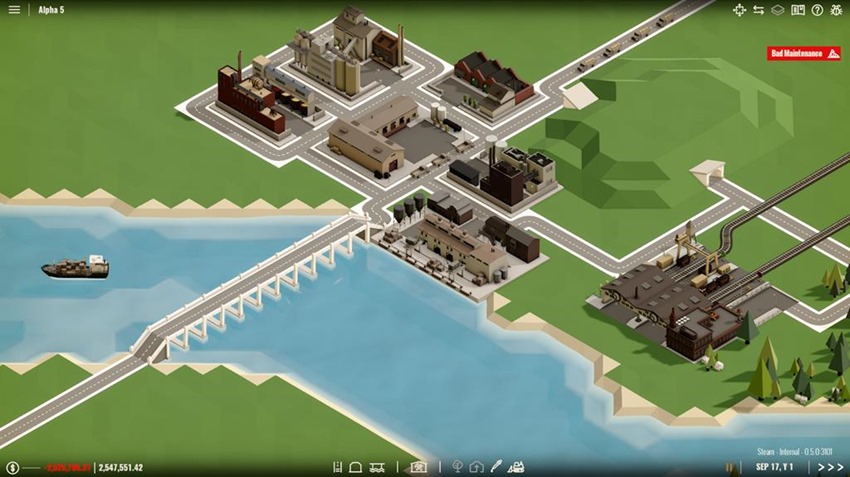 I’ve said it before and I’ll say it again: Going mad without power is boring, because nobody ever listens to you. When you are given power however? Oh man, it’s fantastic and it’s the reason why I’m obsessively sitting behind my desk plotting complete and utter domination of the city that I’ve created. Oh yeah, I’m going to make the public transit run on time alright.

I’ll get your monthly fiscal reports to show off how I used the annual budget to create new green zones of commerce and suburban sprawls. I’ll…waitaminute, I’ve become an accountant. I’ve become a pencil-pushing bureaucrat and WHY AM I ENJOYING THIS SO DAMN MUCH? That’s exactly the kind of game that Rise of Industry is. 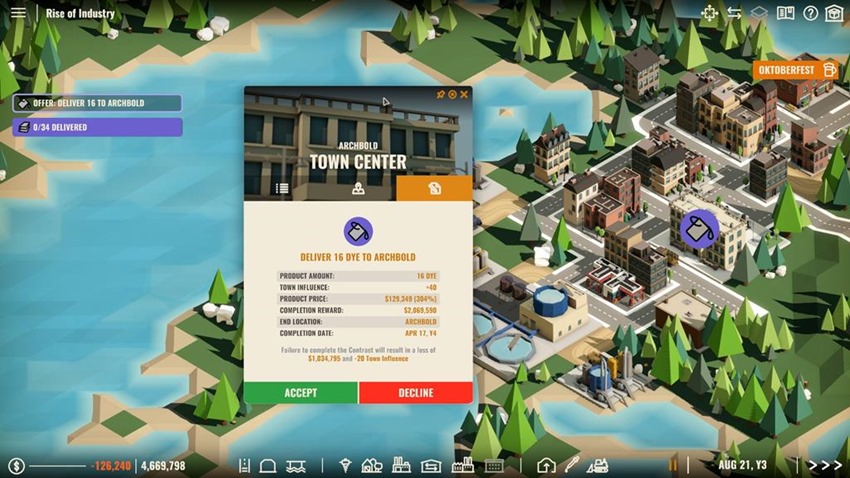 There’s a cute charm to this business simulator, that focuses its efforts on not only growing the organs of commerce that keep a city alive, but also on figuring out what exactly the populace around you wants. It’s not you that’s dictating to others what they should be buying, but rather you’re tasked with figuring out what the lifeblood of your city is truly going to be as you examine the booming population.

With over a hundred products to create an industry around, the challenge doesn’t just stop there as you’ve still got to get your goods to market, meticulously planning every single cent spent along the way. Even if you’re successful, you may find that the times will change and the city decides to settle on the next fad, leaving you to face bankruptcy as you battle to remain relevant in the face of some heated competition from business rivals. 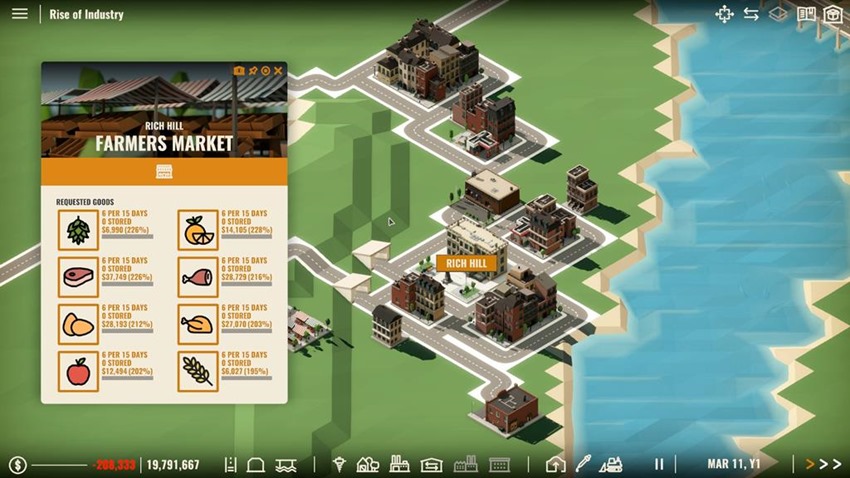 It’s all about the money in Rise of Industry, and staying a step ahead is the key to success as you build your empire and specialise in production while you flaunt the power of a PR department with a bloated budget to help sell your merchandise. Unchecked capitalism at its finest, built around an insanely detailed system of development that allows you to control every single facet of your production. 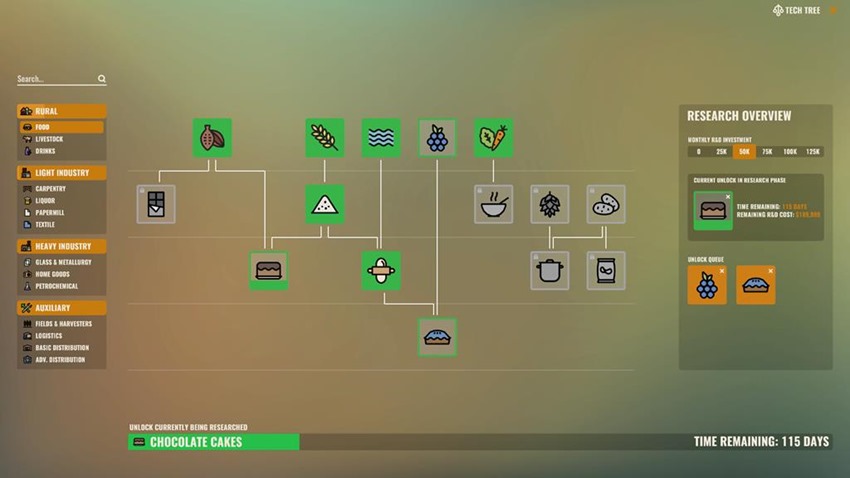 Fortunately, Rise of Industry also makes an effort to make these features as intuitive as possible. Each menu is beautifully laid out, highlighting the most relevant information at the time and the simplicity of the tutorial had me running much needed municipal services in no time. I like that. I like a game which feels warm and inviting, before it prods me towards some corporate espionage so that I can get a leg up in the industry. 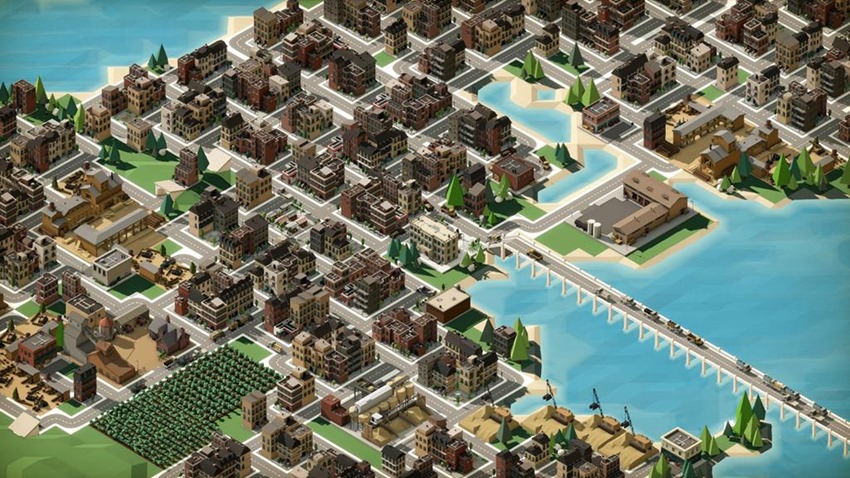 It’s also pleasing on the eyes, with minimalist visuals that don’t distract from the task at hand as my efforts to become the next big business tycoon around resulted in mother nature getting slapped with pollution as the march of industry took no prisoners. All of this, in a game that feels remarkeably complete and yet still calls itself an Early Access title over on Steam.

A couple of hours in, and I’m still scratching the surface of just how detailed Rise of Industry is. My workers have gone on strike because apparently I crossed the line when I eliminated toilet breaks, the potential for mods is huge thanks to the open nature of the game towards that community and random events keep me on my toes. 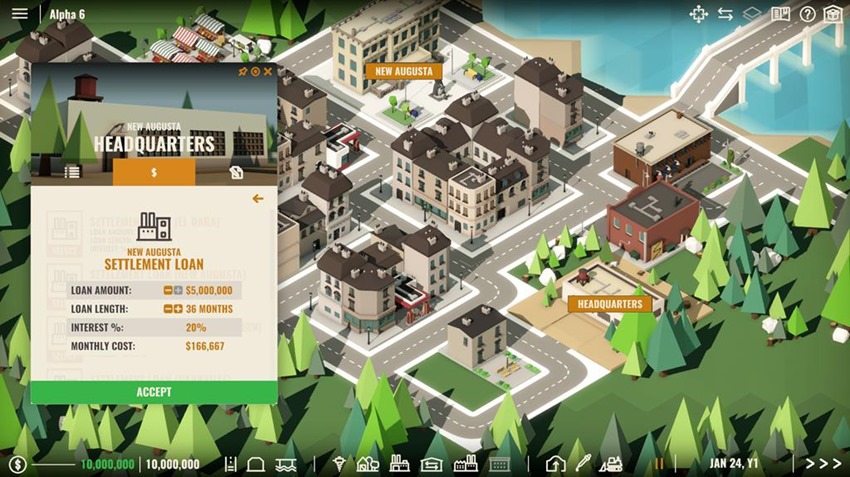 It may be a game tailored toward niche interests, but Rise of Industry has a hell of an eye so far for what makes the genre tick. 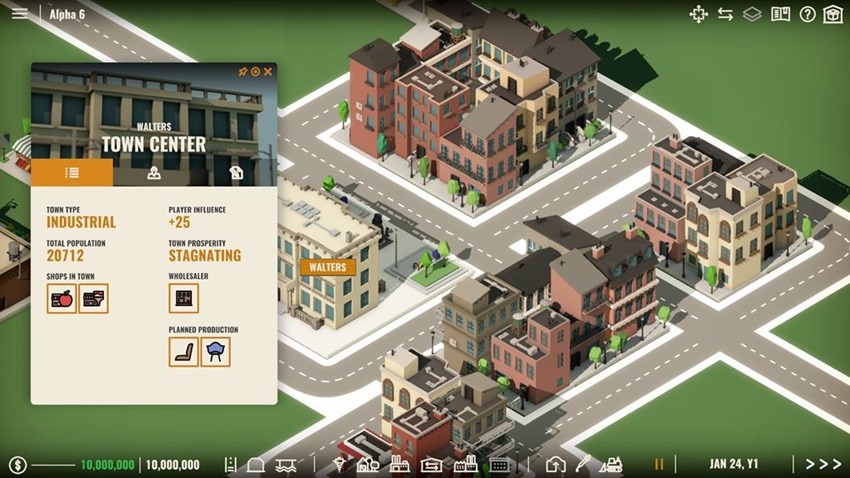