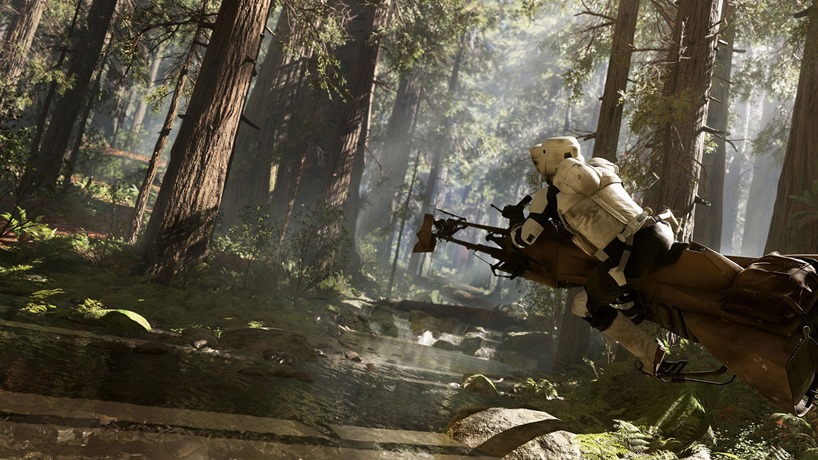 Star Wars Battlefront made a massively positive impression on me at E3. Sitting down to play, I felt absolutely enveloped in the attention to iconic Star Wars lore. From the weapons and sounds to the numerous vehicles and settings, Battlefront really feels like you’re in the middle of a Star Wars battle. And thanks to the leaked Alpha, we knows there’s loads more where that came from.

The small, closed technical alpha kicks off today in select regions, but a version of the game has already found its way onto numerous torrent websites. Since it’s online, the build is fairly useless in the playing sense, but it has allowed some savvy explorers to data mine the various files hidden within. Lists of weapons, vehicles and locations have all been discovered – and they’re likely not even complete yet.

On the offensive front, battlefront will let you equip a plethora of different Star Wars firearms – some of which are locked to specific characters and modes.

It’s pretty much the same for vehicles, which actually aren’t that complicated to pilot whether on land or in air. The Battle of Hoth, for example, features Speeder, X-Wing fighters and AT-AT Walkers , while other iconic battles relatable battles will feature more specific, fitting craft.

Curiously, Space Ships such as the Imperial Star Destroyer and the Mon Calamari Capital Ship are listed too – despite Battlefront not featuring space combat of any kind. It could be that these are reserved for pre-fight cutscenes of sorts, which means not everything mined in the files might be player accessible.

The most interesting leak is that of possible Stormtrooper customisation. Some files pointing towards blueprints and upgrades for the titular white-clad troopers suggests you might be able to customise their attributes and appearance – which would certainly make you stick out online. It’s unclear whether this is actually a feature (and extends to rebel troopers as well), but it seems fairly plausible.

But that’s pretty much as close as most of us are going to get to the game, considering the Alpha was only opened up to a small, specific pool of Origin users. There’s a beta (and the eventual launch) coming later this year, and I certainly can’t wait to get back into the thick of it again. for now though, check out some gameplay from the lucky sods who will be tearing down Walkers and Shield Generators this weekend.