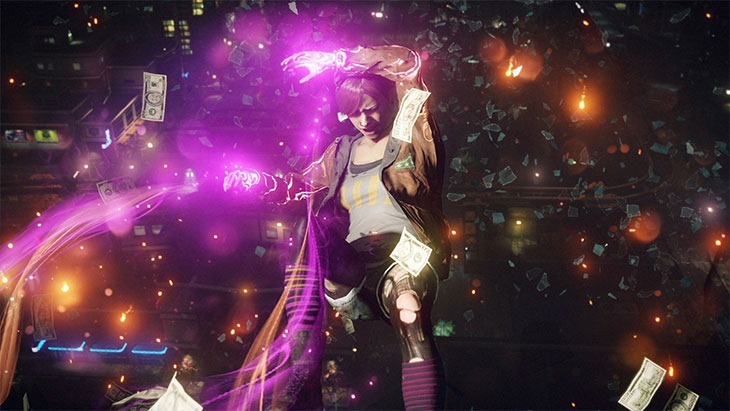 I rather enjoy inFamous’ standalone DLC. Festival of Blood, the non-canon story of Cole’s transition to being a vampire was a bunch of fun, and now the PS4’s Second Son is getting its own standalone game. Revealed at E3, First Light focuses on somebody other than the cocky Delsin Rowe.

No, it instead is all about the adventures of Fetch, the lovely young purple-haired woman who’s the source of the neat neon powers that actually made Second Son fun to play. It’s coming as a bit of DLC on 27th August 2014 – but it now looks like it’ll be getting a disc-based retail release in September.

If you’re the patient sort who prefers a boxed copy, or the sort who has middling internet access, then this is probably the thing for you. It’ll be available on September 10, for the same price as the DLC.

You won’t need a copy of inFamous: Second Son to play First Light, but owning both will unlock a bit of extra content. If you don’t have Second Son, this will be a cheap way to see what on earth the fuss is about. Second Son is a breathtakingly beautiful game, even if its city does feel a bit lifeless and empty. Hopefully that’s a problem that’s resolved in this standalone content.