You may know Jonathan Blow as the developer behind the incredibly complex and imaginative title Braid that is available on the Xbox 360, PS3 and via Steam. Or you may know him as the whiny indie who seems to have a chip on his shoulder about Microsoft.

Well he’s emerged from his cafe latte mocca something or other to again complain about Microsoft. This time it’s the fact that Microsoft dropped the price of Braid on the Xbox Live Marketplace without consulting him first that has him enraged.

Unfortunately the original tweet has now been deleted but not before Neogaf got them all down as images.

So there are a few things wrong here. Firstly Braid was published by Microsoft on the Xbox 360 and as a publisher they have full say on the price a game gets marketed at. Jonathan signed that contract and has now accidently misplaced it.

But when people started nosing around it was pointed out that the price was actually dropped way back in 2010. This was quickly pointed out and then JB tweeted 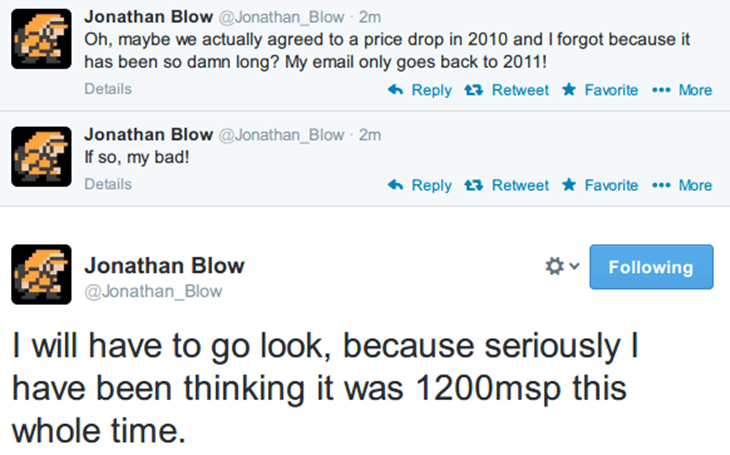 Whoops.. so he was consulted and he did agree to drop the price way back when but then subsequently forgot and starts bashing Microsoft for it.

Now I get that he has a testy working relationship with them but he really should remember that Microsoft marketed the hell out of his little game and while the game is great it could have easily been missed if the marketing wasn’t so widespread. So show a little class.

Also if you haven’t played Braid make sure you do that, it’s an excellent game.

Jonathan Blow's The Witness offers challenging, if somewhat repetitive puzzles in a world …