At about 12 hours in, I feel like I’m barely scratching the surface of Kingdom Come: Deliverance. Just when I think the game has nothing else to teach me, up pops a new tutorial or gameplay feature that changes how I play or see the game. So here’s part one of a review in progress for the game, because it’s clear there is still so much more to experience.

Kingdom Come: Deliverance is an epic open-world RPG from a small Czech team called Warhorse Studios. It’s not a fantasy, it’s a game heavily steeped in realism and set in medieval Bohemia, now a part of the modern-day Czech Republic. Not many games make the effort to take place in the real world, incorporated with real history, but the setting remains every bit as fascinating and engrossing as Tamriel or Azaroth. 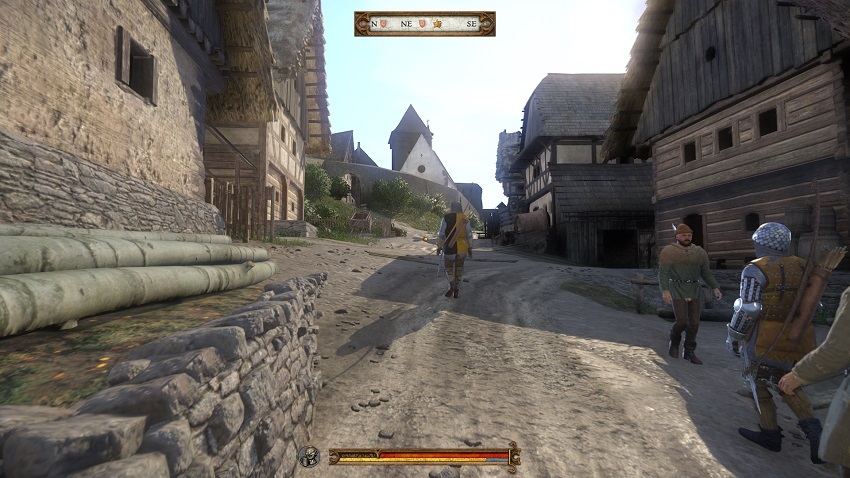 You’re not creating a character for this adventure. Instead, the game casts players as Henry, the son of a village blacksmith. He dreams of exploring the world and finding himself before settling down, and he learns swordplay on the sly. His peaceful life is soon shattered when an army of mercenaries bares down on the village and burns it to the ground, slaughtering all of Henry’s loved ones. Yep, that’s what happens in RPG villages, you could set your watch by it.

Following that, Henry joins the services of the lord of his village and takes steps in resisting the mercenary invasion and avenging his slaughtered parents. That’s about as far into the story as 12 hours takes you, depending on how much you do on the side. There are also other personal scores to settle, training to be had, and lords and knights to impress, and the game certainly keeps players busy.

One of the main selling points of KCD (as we call it in the industry) is realism. The medieval world moves and lives around the player, and at any point you could stop and watch peasants working, chatting, or just leading their little digital lives. Of course, it’s the combat realism that will really make any HEMA nerd like me giddy, and the game features one of the deepest and most realistic fighting systems of its medium. Melee weapons include messers, arming swords, longswords, axes, and a variety of polearms, and they all make for some thrilling duels. The player can also kit themselves out with bows and a variety of arrows, a horse, and some period-accurate armour. The protective gear is actually a highlight of the game. Realistically, it is worn in layers, it affects your noise level as well as how people react to you, it looks great, and there is hardly any leather armour in sight. These are knights, not bikers. I wanted to make a joke about wearing chain mail and saying “The Czech is in the mail” but I can’t figure out a good build-up to the punchline. 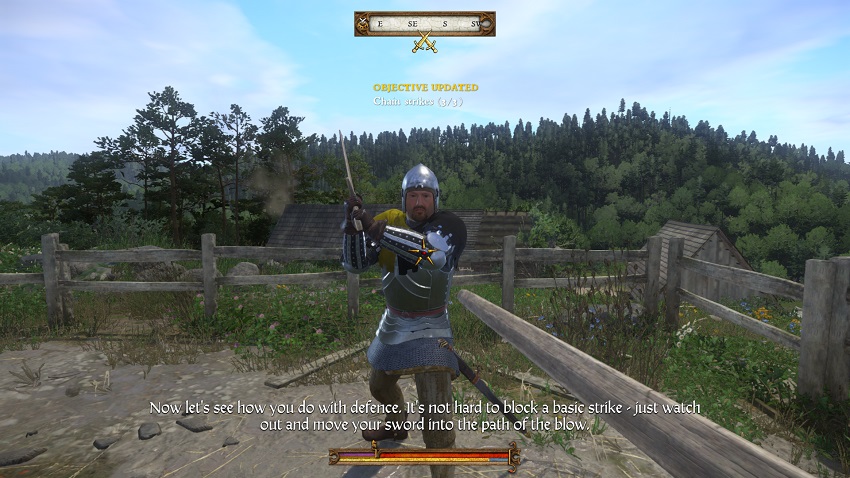 So that’s about everything the game is, now let’s talk about what the game is like. And here, KCD actually fills me a mixed bag of completely conflicting emotions. At the three hour mark, I was having a bad time. After ten hours, I barely wanted to put it down. Personally, I can’t think of any other game that has been so compelling yet also flawed. The biggest and most inexcusable issue with the game is how slow it feels. Not just in terms of pacing (more on that later), but in the way that nearly every interaction and use of the menu takes a few seconds. If there’s a table covered in items, players have to pick up each individually and watch the same grabbing animation play out over and over. The map and inventory takes about two seconds to load up, which doesn’t sound like a lot until you open one by accident and have to switch to the other. And while the main menu loads, players will be subjected to the same intro video every single time.

Many of the systems in the game feel flawed. Lockpicking in particular, which requires a type of thumb dexterity that most of us surely won’t manage. Archery will also likely be off putting to many at first, and the game makes no attempt to make this accessible to newcomers. Henry’s arm sways all over, the arrows drop much too fast, and there isn’t a reticle to assist you. Melee combat gets a reticle, so it makes no sense that archery doesn’t. The game also has some very odd pacing. For example, shortly after his village is burned down, Henry is subjected to a long monologue by a lady of the castle explaining her husband’s history as ruler. It feels out of place, and is hardly the sort of thing a vengeful sole-survivor would want to hear.

Presentation wise, the game mostly looks amazing. It’s the CryENGINE, of course it’s going to look good. However, the game is plagued by lip-synching issues, graphical clipping, texture pop-in, and some overly re-used animations in dialogue. I’m reviewing the game on a PS4 Pro, so I can’t speak for the other systems. None of it is terrible, and the game is gorgeous overall, it just frequently jars the players and can break immersion. I should also mention that the game has massive updates waiting for you once the disc goes in, nearly 50 gigabytes if my math is correct. This might only affect physical copies of the game, perhaps digital purchases will download everything all at once. 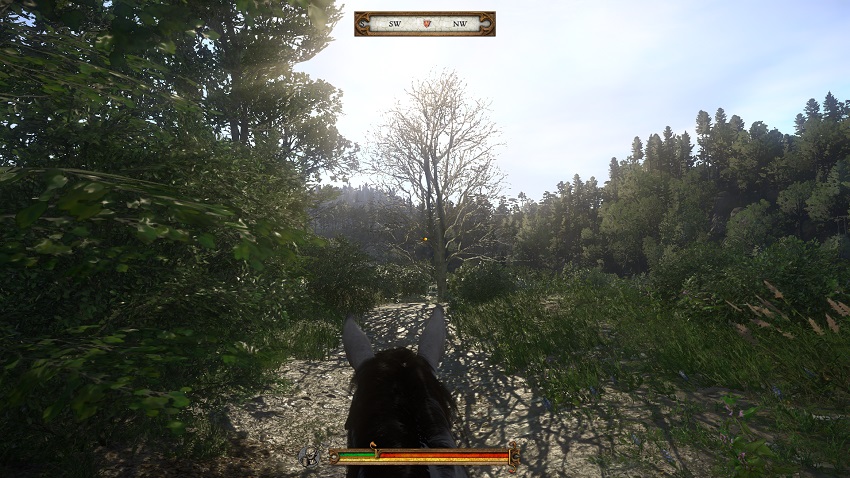 Smaller issues aside, the main reason this game is so polarising is how long it takes to be in full control. The intro sequence practically railroads you down a path, keeping a hand firmly on the wheel. At around ten hours the hand is released and players can freely explore without constantly being funneled into the next story mission. And it’s essential that you follow that funnel, because vital gameplay tutorials and skills are only learned through these. Want to actually learn how to use a sword? Ignore the fact that you were taught the basics at the beginning of the game, because the real tutorial comes at the 6.5 hour mark. When the player starts the game, they have access to just about all the types of combat, but they lack the abilities and training to actually survive any encounter until hours into the game.

And that’s when I realised something amazing about KCD: this was character building at its finest. You’re not playing an original character, this is not a power-trip, and approaching this with an empowered mindset too early will get you killed or knocked on your rear. Players need to adjust to the mindset that they’re playing as Henry, an ordinary peasant. Of course he’ll lose a fight, he’s never been trained. Of course he’s outclassed right from the get-go, he’s up against professional soldiers.  Once you’ve learned the right skills, combat begins to make sense and fights become something you can win. In hindsight, it’s clear that the first ten hours of the game serve to establish that Henry is on a journey to become a badass. However, it is incredibly frustrating at first. 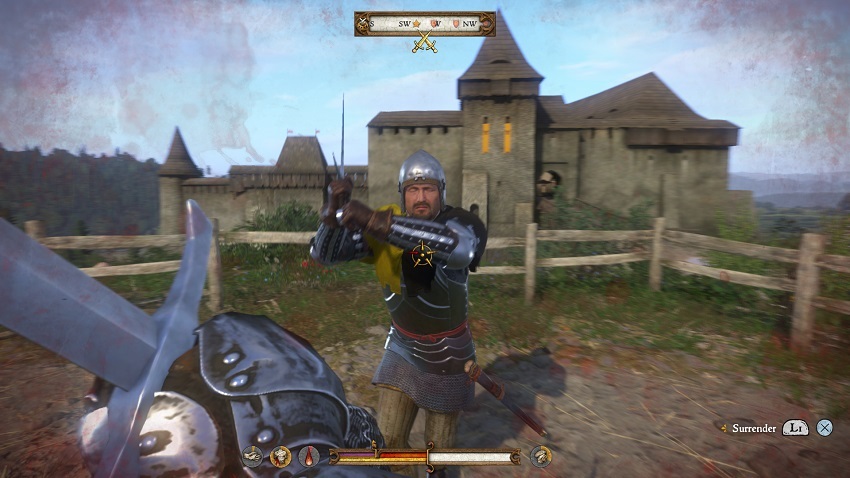 I never like seeing games be defended by “It gets good once you’re X hours in”, it always comes across as a lazy excuse for video gaming Stockholm Syndrome. This is not true for KCD, despite what my growing enjoyment for the game might say. Instead, it’s clear quickly that the game has the potential to be an amazing RPG. Every time I died, or suffered defeat, I would dust myself off and try again from a different approach, or go back and practise first. It’s a game that hides itself behind a wall of frustrating pacing and flaws, and challenges players to get good enough to smash through the wall and have fun.

This is not the conclusion of my thoughts for Kingdom Come: Deliverance, so you won’t find a score down here. There’s still more that I haven’t even touched on, like the alchemy system or courtship. Just this morning I unlocked the tutorials to perform counter-attacks, meaning my entire approach to combat is going to change. If you’re looking for a conclusive buy it / don’t buy it opinion, then all I can say is that I can’t wait to keep on playing. If you can brave the first 12 hours, then this may provide a role-playing experience you didn’t know you wanted. If you’re still on the fence, then come back soon for the next part of the Kingdom Come: Deliverance review in progress. Oh, and I almost forgot. You get a horse named Pebbles, and that is simply adorable. 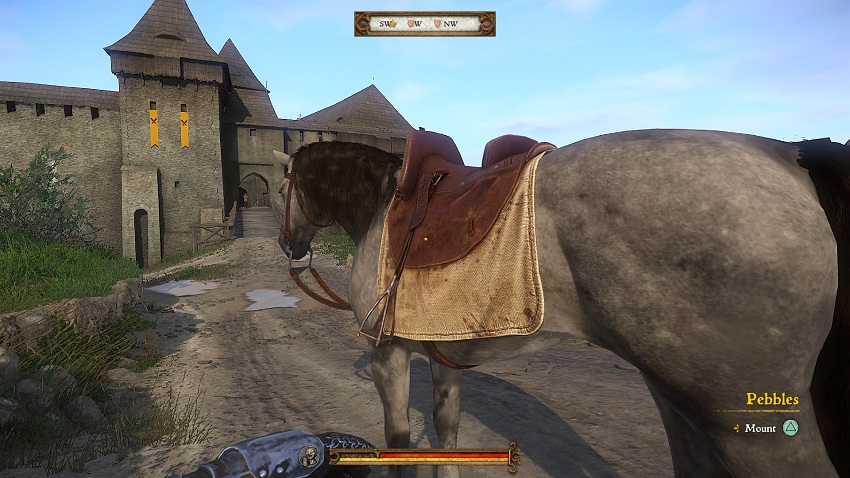