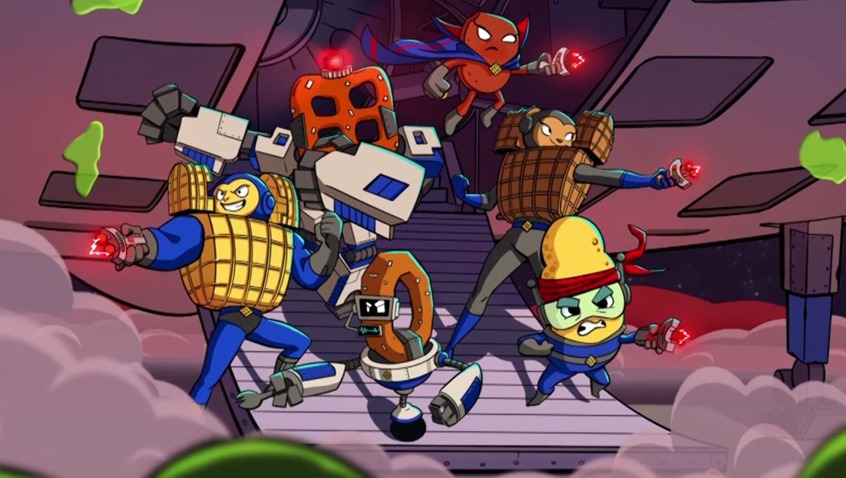 You’ve just woken up, you’re groggy and you need a boost to the system. You need poo fuel, life-sustaining matter with which to charge up the meat-puppet that your brain controls so that you can go about your daily business! And nothing starts the morning off better than a bowl of cereal, filled to the brim with flavoured husks of wheat and then popped into a microwave for a full minute on high heat. YUM.

But what’s this? Between the dangerous amounts of sugar and mass disdain for my choice of heated milk, there’s a…CD-ROM? If this were the 1990s, America and a box of Chex in front of you, that wouldn’t be a scenario that was unheard of. Back in 1996, the Chex cereal brand decided to hop on the gaming train with their own version of Doom that was about as violent as a Care Bear tickle party.

Developer Digital Cafe took the original engine for Doom, retooled it into a game about saving the world from a dread soggy menace and threw in numerous cereal-based power-ups. It was tacky, weird and of course it earned a cult status over the years with various players making unofficial mods for Chex Quest. The Angry Video Game Nerd did a whole episode on Chex Quest, which is well worth a watch:

Anyway, Chex Quest is about to be officially improved. US food group General Mills is reviving Chex Quest in 2020, with Chex Quest HD for PC. Here’s the trailer and elevator pitch:

Chex Quest HD is a modern, multiplayer remake of the classic 1996 FPS advergame of the same name.

The Intergalactic Federation of Snacks’ outpost on the remote planet of Bazoik has been overrun by evil cereal-eating creatures from another dimension! These slimy “Flemoids” have taken the citizens of Bazoik captive and it is up to you and the Chex Mix Squadron to free them. Thankfully you have a handy array of “zorching” devices which can send these invaders back to their home dimension so you can succeed in your mission.

According to Team Chex Quest HD, the updated version will include the following features:

I’m kind of sad it’s not being marketed as CHEX Quest Eternal. What a wild time to be alive, when cereal mascot games can render this much joy. Now if you’ll excuse me, I’m going to defend my controversial breakfast choices by hurling heated bowls of granoloa and milk at the savages knocking on my gate with their pitchforks and too damn big spoons that they use to funnel dangerous amounts of corn flakes into their gaping maws every morning. TEASPOONS FOR LIFE YO!