Home Features After a massive overhaul, these are the ten Exotic best weapons in Destiny 2 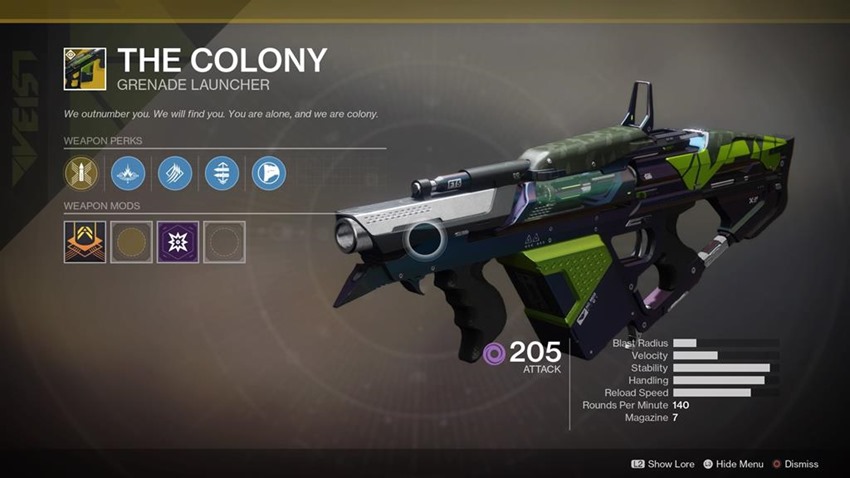 I’ve recently fallen back in love with Destiny 2’s weapons, easily the best feature of Bungie’s sandbox. Sure, Warmind may not be the perfect band-aid to apply to the game’s bleeding loss of players, but the recent fine-tuning to make Destiny 2 better is certainly showing some promise for the franchise. Destiny 2’s exotic guns feel special once again, a feat that was achieved by making these beautiful chunks of steel and crowd control unbalanced and uber-powerful once again.

So which of Destiny 2’s guns are the best then after that hefty update? In no particular order, these are the ten best guns in Destiny 2’s post-Warmind world: 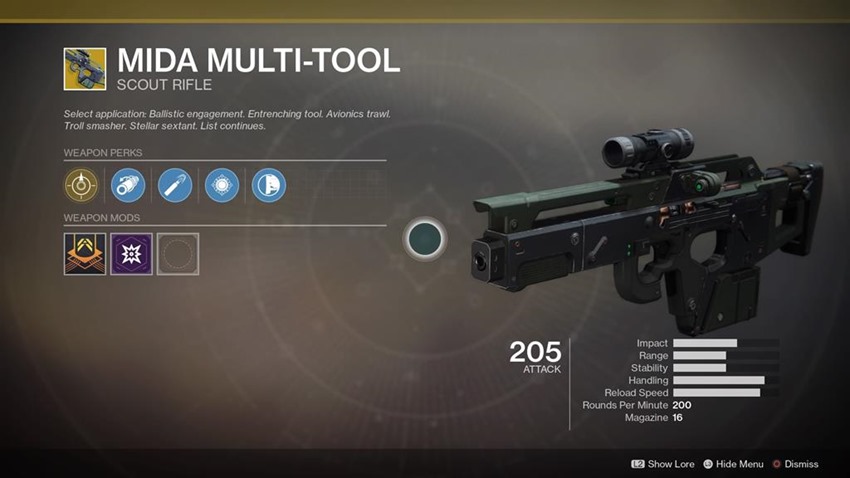 Well that was easy. Wait, what do you mean I have to write a proper list? Fine, have it your way. Here are my picks for the best death-dealers in Destiny 2 currently. 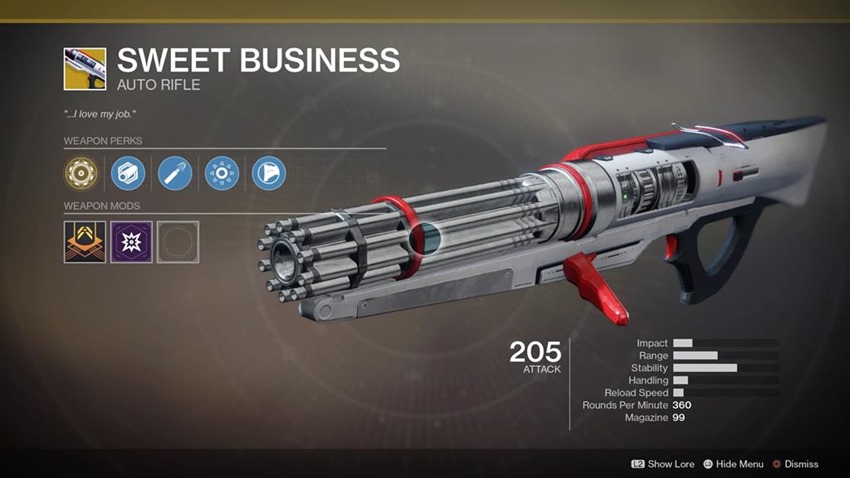 For anyone who loved some pay ‘n spray action, Sweet Business was the gun to have. It came with one massive drawback though: This monstrosity ate bullets like a fat kid left unattended in a candy shop. It didn’t help either that despite it’s fantastic pairing with the Actium War Rig on a Titan to help feed it more ammo, that Sweet Business would still devour every bullet fed to it like Raul Julia chewing on scenery in the Street Fighter movie.

The current version of Destiny 2 fixed this massive problem, by giving Guardians a crapload of ammo to hold in reserve. It’s the simplest of fixes that makes for a massive difference in how Sweet Business is used. With a fireteam by your side that distracts bosses, Sweet Business is now actually useful for enemy encounters when you’re facing certain bullet sponges. Simply hold down the trigger, pray to the Traveller and spit hot lead. Beautiful. 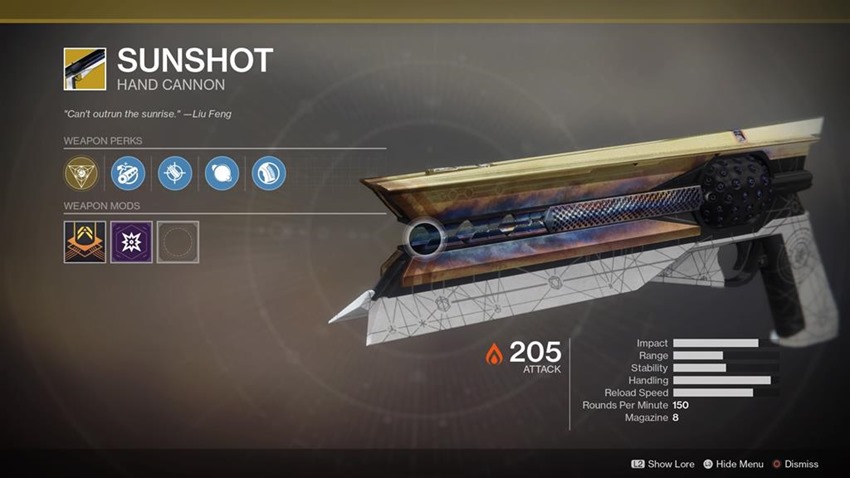 Much like Sweet Business, there wasn’t much that Sunshot needed in terms of balance or change. An exotic hand cannon, Sunshot has always been one of your best friends in any situation that had a Solar burn modifier attached to it. It’s stable, holds plenty of ammo and its explosions are gorgeous when you see them erupt on the faces of Destiny 2’s various enemies.

So how do you make it better? By making those explosions at the end of every bullet even bigger. Sunshot is now the Michael Bay of hand cannons, a beast that fires the hottest of rounds that come packaged with a supernova explosion when they impact. It’s another simple fix, but one that has big implications for certain strikes that include a certain set of modifiers. Sunshot is well on its way to becoming a Nightfall staple again. 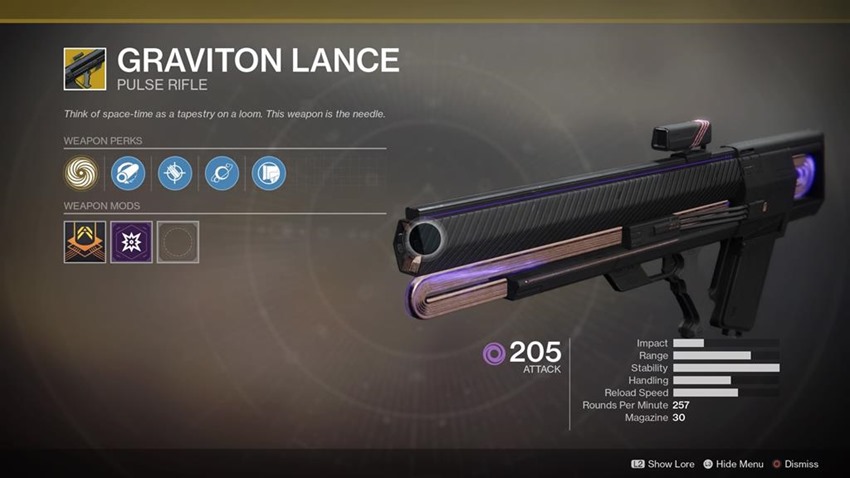 I’ve spoken before about Graviton Lance and it’s fun design, but I just cannot believe how damn good this gun is currently. For anyone playing a Void-heavy class, it’s an absolute essential. While it looked and sounded nice on launch last year, Graviton Lance was more of fun oddity to possess than to actually use. Post-Warmind, the gun is an absolute beast.

A pulse rifle that only fires two rounds may sound like a broken gun, but Graviton Lance makes up for that with a host of perks. It’s recoil is predictable, it’s second round in a burst crams in a ton of damage if it lands on a critical spot and it can be used to clear rooms in an instant thanks to its ability to spawn Void explosions with seeking balls of death after a kill. Maybe the gun is too powerful, and I pray to RNGesus that Bungie leaves it alone.

In its current state, it is pure perfection. 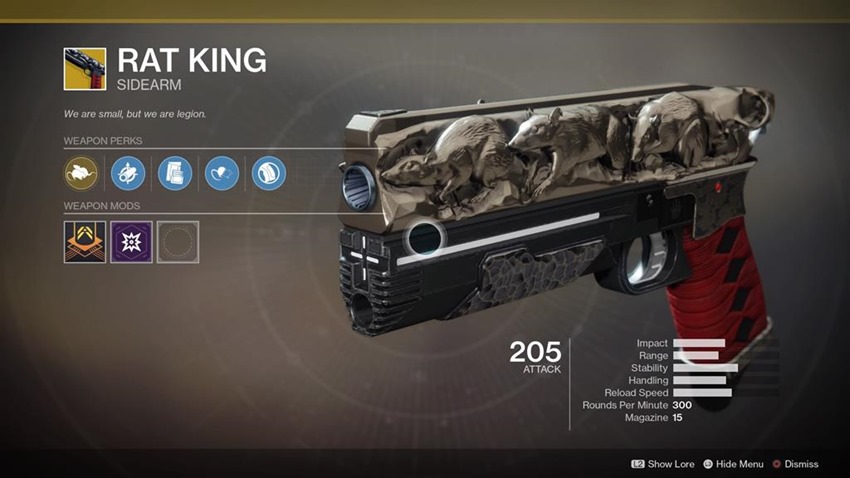 One of the best guns in Destiny 2 is highly dependent on one important factor: Teamwork. The Rat King was an absolute bastard to obtain, but once you had it? It was your fireteam’s best friend. When you grouped up and triggered its perks, the pistol was a damage-dealing monster, one that few other guns could match. After Warmind, Rat King is even more devastating.

The gun now has a full auto firing mode, its group perks deal even more damage in a fireteam and it has more ammo reserves. Its best perks may be its more subtle advantages however, as Rat Pack can activate even when the gun is tucked into its holster, while the HUD now reminds you far more clearly of these advantages. Frank Sinatra would be proud of the new rat packs running rampant. 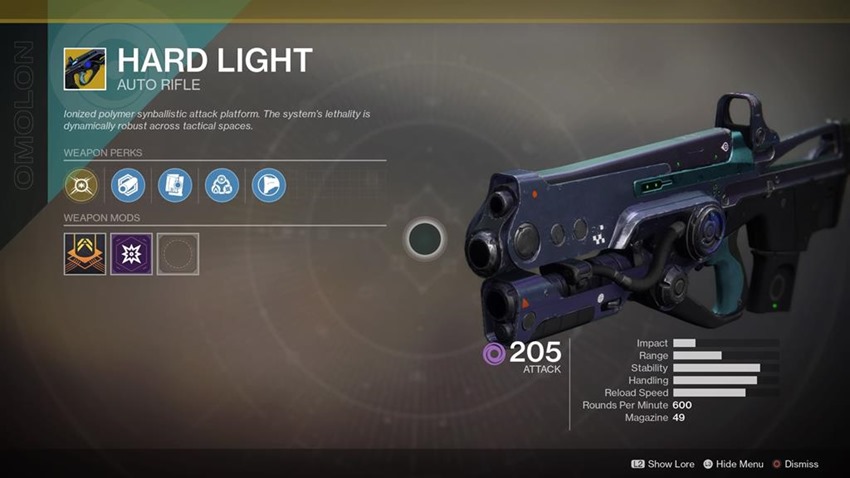 When you needed a Jack of all trades gun, Hard Light was hard to beat. As an autorifle, it dealt death surprisingly quickly and its range wasn’t half-bad either. Able to swap its elements on the fly, Hard Light was essential for missions that saw you facing multiple factions that had heavy bosses in front of troops. Need to switch from solar to void after killing a Red Legion Centurion and finding a Vex minotaur in your way? Hard Light was just the gun for the job.

Its greatest perk however, was that it could eviscerate mobs of enemies in enclosed spaces. Ricochet rounds did significant damage, making this autorifle a claustrophobic carnage machine. These days, that tight-spaced masterpiece is even more impressive, thanks to an increase in damage from its rounds that have doubled in power. With Hard Light, it doesn’t matter if your rounds don’t find their target the first time, because a full clip is bound to hit something eventually.

Let’s be honest here: Skyburner’s Oath is less of a scout rifle and more of a mini rocket launcher. Perfect for Cabal-heavy encounters, Skyburner’s Oath was a godsend for anyone who found themselves flustered by Red Legion Phalanx troops and those damn shields of theirs. The current incarnation of Skyburner’s Oath doubles down on its rocket launcher aspirations, by adding even more aim assist and increased handling to the mix.

Also? It has an explosive payload perk attached to each round and tracking shots for hip-fired shots. Which makes a Nightfall strike on the Weapons Dealer mission that much more fun. 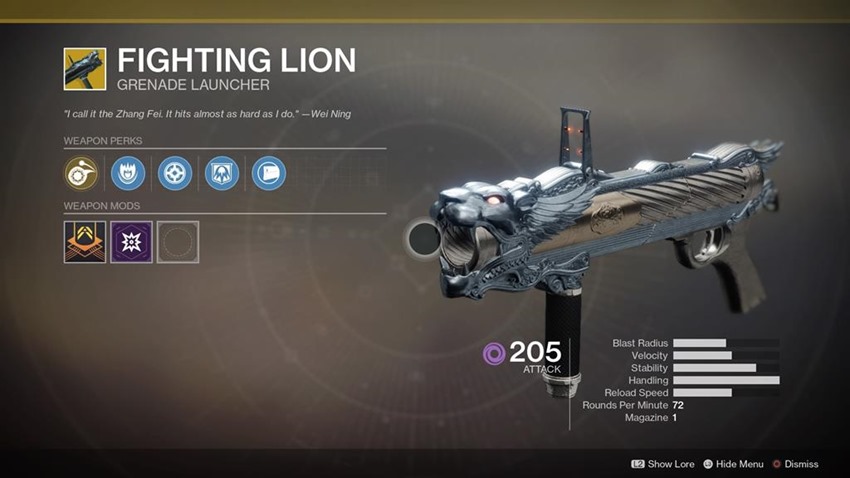 If there was one Exotic that you’d never see anyone use in Destiny 2, chances are that Fighting Lion would be at the top of that list. A grenade launcher in the secondary energy slot may sound appealing, but Fighting Lion operated more like a toothless kitten than the king of the Savannah. Its damage output was piss-poor, ammunition was spent within seconds and its reserves were emptier than SAA’s coffers.

Fighting Lion is now much better. While I wouldn’t recommend it for taking down solo bosses, as a mob-clearer the grenade launcher does its job. Less damage on direct hits and a lot more on splash instead, Fighting Lion also has an increased reservoir of ammo, while kills guarantee more energy weapon drops. 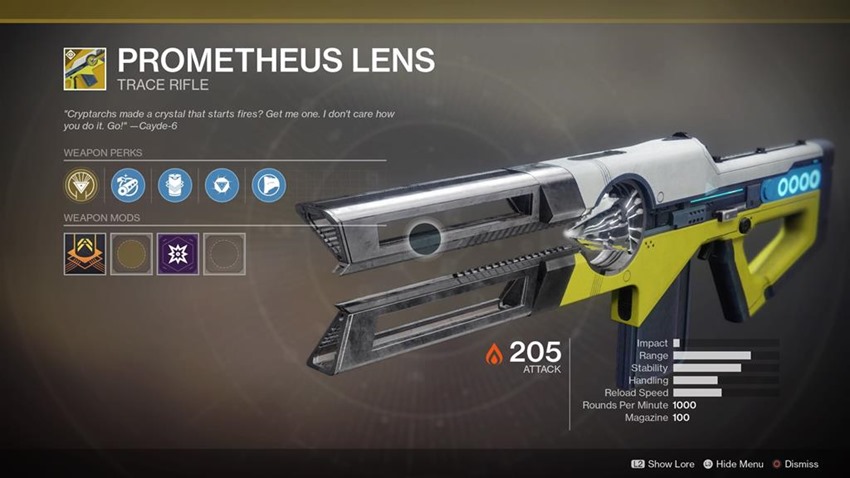 Destiny 2 only has a pair of exotic Trace Rifles: Prometheus Lens and Coldheart. Whereas Coldheart is a more exclusive weapon that PlayStation 4 guardians got their hands on early enough, Prometheus Lens has proven itself to be the blue collar alternative. Coldheart has seen a bump in its killing power, but for a weapon that is focused on ramping up kills with damage over time, ammo is everything.

That’s why Prometheus Lens now includes even more ammo and even more lethality in its dreaded solar field. Albeit at the cost of direct damage from its beam. Still, it’s an absolute beast in the right hands. 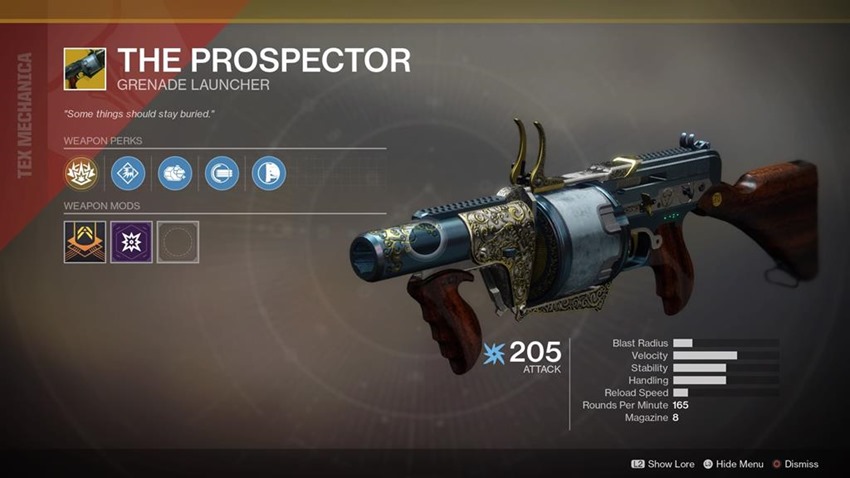 I was absolutely torn over this decision: Which exotic grenade launcher in Destiny 2 is truly the best? Prospector or The Colony? The Colony is certain fun, what with its ability to fire insectoid rounds that seek out foes and reload while holstered. The catch here I reckon, is that grenade launchers work best when you save the ammo for that enemy.

That threat who needs plenty of firepower to take down. Maybe that’s why I’m favouring the Prospector, as that weapon doesn’t lob explosive projectiles at high speed anymore: It vomits out sticky grenades which now also do burn damage over the time. That results in a gun whose entire ammo reserve can be fired out on to a single foe for one massive moment of pain. Making this old-timey beauty a real treasure for the most dangerous nemesis around. 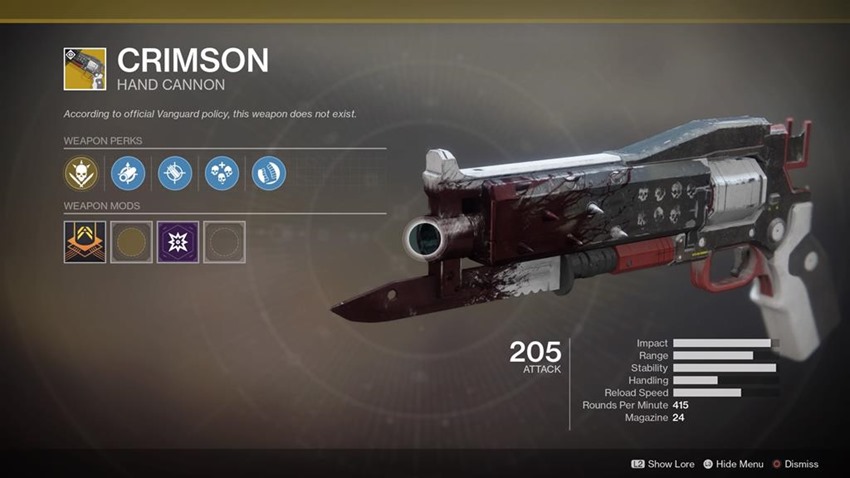 As far as hand cannons go, Crimson was utterly ludicrous in its design. The gun that Dirty Harry’s 44 Magnum dreamed of being one day, Crimson was essentially a pulse rifle in hand cannon form. A unique weapon amongst other unique death-dealers, Crimson was pain in an ornate package. It didn’t need much done to it to be improved upon, and Bungie stuck to those guns. Heh.

Instead, Crimson avoided any drastic overhauls, with the bulk of its changes being mere refinement over drama. A quicker recovery time between bursts and extra ammo in the pocket makes it a better weapon, perfection in its class. Now you only have to ask yourself one question: Do I feel lucky, punk? Well, do ya? 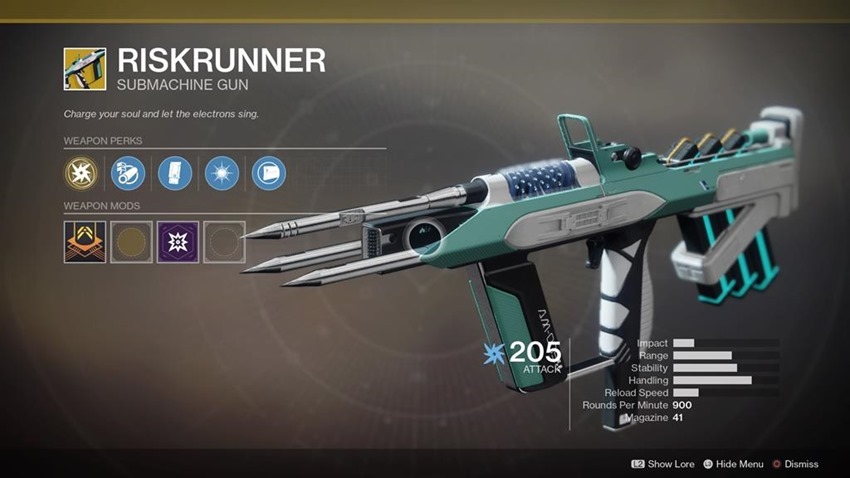