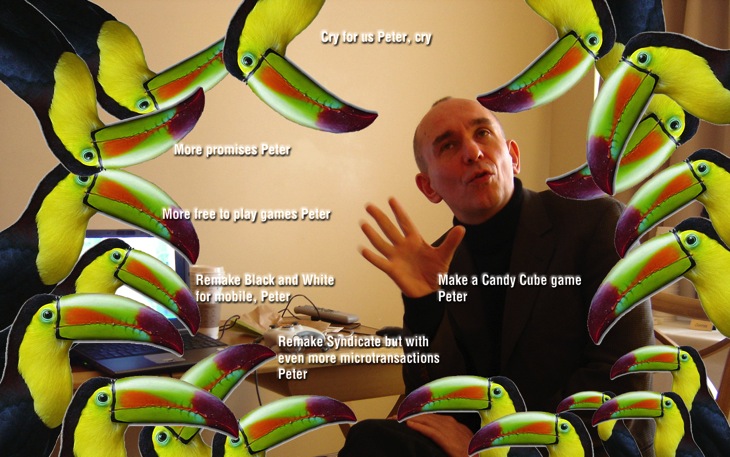 So, remember how I told you how one of gaming’s grandfather’s (or is it the drunk uncle?) thought free-to-play Dungeon Keeper was “ridiculous”? Now Peter Molyneux has opened his mouth again. Darryn can’t stand him, and now you’ll hate him, too.

Speaking to Pocket Gamer, Molyneux begins with the usual over the top statement to build expectations. He claims that monetization in Godus will be as “fresh and as new and as different from anything you’ve ever seen in any game” – you won’t be able to pay until you’re deemed ready:

You’ve got to be subtle about it and slowly layer in those mechanics. The point we introduce monetisation depends on the player, and the game maker has to get you into the right mindset.

According to Molyneux, players need to see Godus as a full-fledged hobby, not just a game. Yet he has no problem taking the moral high ground:

We could layer in ‘it takes six days to build this house’, and maybe we’d make a shitload of money, but that’s not my ambition for games. There has to be a better way.

Oh, the hypocrisy of it all. Dungeon Keeper as a free to play game is ridiculous, yet conning people into throwing money at Godus is fine. Oh, but Godus will delay the money grubbing until you’re fully hooked on the game. I mean, no wait, at the “right mindset” to be fleeced for money. It’s hard to believe that Peter Molyneux used to be such a power house in gaming. He still has the name and the history of some great games, but he seems determined to chip away at his own credibility.