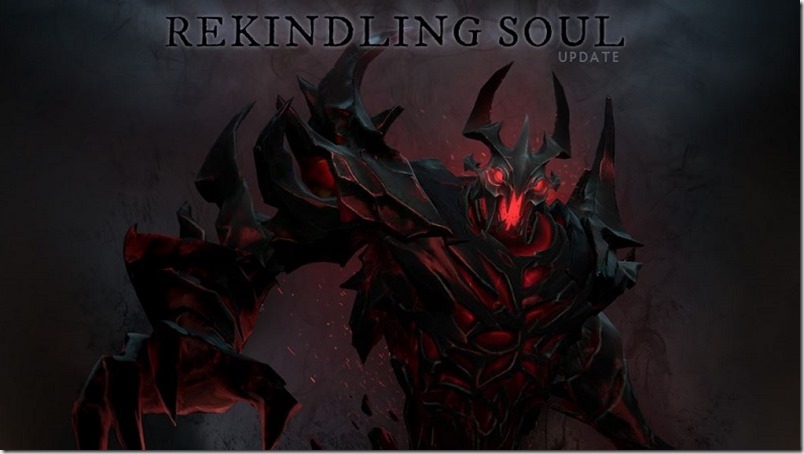 Believe it or not, I have moments where I find Dota 2 to be completely stale. Sure I love the game to bits, but I was eagerly awaiting the next big patch which would shake the formula up. It’s almost like Valve heard my prayers, because they have called the latest patch the ‘Rekindling Soul Update’. Will it reignite my love for the game?

The changes are quite large, and can be read right here. To briefly sum it up – the map has received some changes, Bloodseeker and Phantom Lancer have received a rework, there is a new bounty rune as well as a new item (crimson guard), a ton of hero balances and changes, and a whole lot more. Shadow Fiend also received his own arcana set, as well as a complete remodel.

I think he looks rather awesome, but the old model looked great too, so I’m a bit torn. Moving on, one of the biggest changes is the rework of parts of the map which include new paths, elevated fountain areas, and a new Rosh pit.

It is a momentous day in the world of Dota, the likes of which have not been seen for ages, for now it is proven that even the land itself is not above being modified. Along with an assortment of other changes, it’s moving day for Roshan. Though don’t worry, he hasn’t gone far. His pit now looks out upon the river from a different angle, and nearby paths have been rerouted around his legendary den. Though his location may have changed, you can count on him defending his territory with the same murderous energies. These changes, along with many more, can be found throughout the battlefield.

It is momentous indeed. The new paths will provide some extra juking potential, but also open up new options to gank the lanes. While Rosh is in a more balanced position, I still feel that it favours Dire somewhat. Radiant have a long way to go if they want to take on the big guy, whereas Dire just need to teleport to T1 or T2 bottom and they’re basically there (throw in a blink or force staff and they have even easier access).

The new bounty rune is big too. No longer will be people let off a flurry of swear words because their opponent mid has just been luckier than they have when checking runes.

The birth of a rune is no minor event. Forged of the most fundamental magic, this new update will unleash a rune never before seen in the world of Dota. Imbued with gold and experience, the Bounty Rune will serve to enhance your wealth and to speed the accumulation of abilities. Additionally, runes now spawn two at a time, with one at each end of the river. One of the runes will always be a Bounty Rune. Earn your bounty if you can!

Thing is, this is big for support/gankers too. Roaming is a lot more viable as there should be a rune available on both sides of the river (if you get there before the enemy) and it may offer you a boost in gold and experience so you don’t become horribly under levelled. If not, at least you will be able to top up your mana and health (assuming you have a bottle).

The new item, Crimson Guard is huge too. It not only tanks up the players a bit more, it also offers some great team fight potential.

To meet new threats, one must seek out new defenses. Originally forged during the chaos of New Bloom to defend against the dreaded Year Beast, the Crimson Guard is now ready to join the ancient war. Suit up in this armor, and you’ll be ready to rally your forces and lead the charge against the enemy.

Active: Guard – Gives nearby allied heroes (750 range) +2 armor and a damage block shell that has a 100% chance to block 50 damage. Lasts 9 seconds. Cooldown 70.
Passive: Damage Block – Gives the wearer a chance to block damage from each incoming attack based on whether the equipped hero is melee or ranged.
Note: Guard only affects heroes. Has the same no stacking mechanic as Pipe of Insight/Mekansm for 70 seconds.

Correct me if I am wrong, but is that 50 damage block from all sources for 9 seconds? Or is it a once off block of 50 damage? If it is the former, that is insane in a team fight. It basically provides a Vanguard for everybody!

There are a ton of hero changes. This one however, is easily the biggest of them all. Why the hell did that 0 get nerfed?

There are loads more changes, which unfortunately I cant discuss in detail here (else you’d be reading a 10 000+ word article). Be sure to skim through the patch notes to see some of the other hero and item changes, as well as some other extra additions that will be landing in Dota 2. I’ll leave you with this last video which shows you how the courier morph will work.

From my understanding, the patch should be out today or tomorrow – don’t quote me on that though. What do you think? Good/bad patch? My body is ready, I can’t wait to see how this changes the game dynamic of Dota 2!