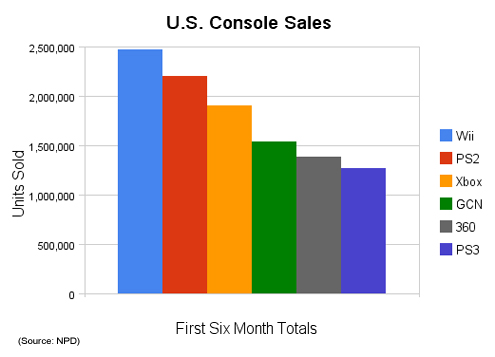 What do we have here? A nice little chart showing the sales of each of the major console after their first 6 months of life. US data only…

So the Wii is once again the best selling console, followed by the PS2, Xbox, Gamecube, Xbox 360 and then the PS3.

So the 360 was outsold by the Gamecube and original xbox in the first 6 months of it’s life? That is suprising, however the Xbox 360 had no killer titles until Gears of War came out and the original Xbox had Halo at release.

Once again the PS3 is bringing up the rear but like the 360 it has no killer titles yet, it should be able to ramp up it’s sales quickly once it gets one of those…

Oh and can we now officially never call the Wii a fad again?