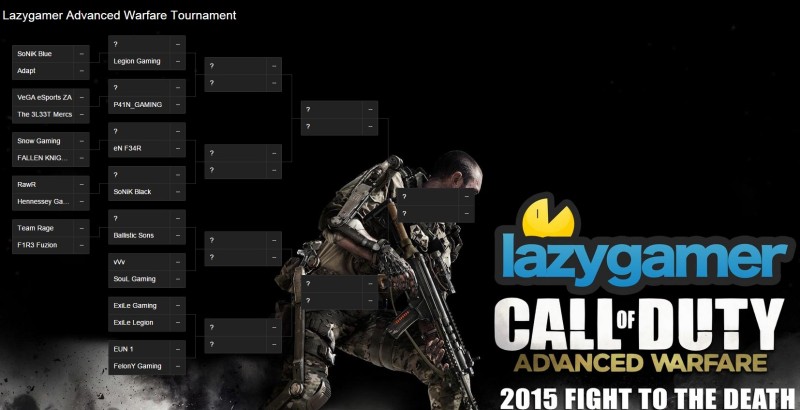 Okay so earlier this week I told you we had two spots left to fill in our first Call of Duty tournament and that we were going to limit the size of the tournament to 16.

Well we lied, but I blame you lot. After that post I received another 7 entries fighting for the 2 spots and since I couldn’t think of a good reason to deny 5 of them we just accepted them all. As such we’ve opened the tournament again for anyone who wants to join, the admissions will close next Friday and the tournament will start on the 30th of January.

So to sign up make sure to email your team name, members, contact number and preferred days to tournament@lazygamer.net and also don’t forget to read the rules.

Most important rule. The host will always be local. If you are an international team then when you play the opposing side will always be host. If no team is based in South Africa then you can rotate the host. The plan is to have the semi-finals and finals hosted at a neutral location and streamed.

Okay that’s it, the current roster is in the image above (Or click here to embiggen in case you aren’t an ant) but don’t panic as we haven’t randomised it yet so it will change. The two Exile teams won’t be playing each other in the first round.

Oh and remember this isn’t just for fun, there are some awesome prizes on offer as well