Before I get into the main piece, let me just apologise off the bat. Why? Because most of the films I’ll be looking at will come from the eighties and the nineties so if you have a particular aversion to that period of cinema (particularly American films) then sorry, but those are the films that have a special place in my heart. It’s not that this period of cinema has given us a greater quality of films than any other. It’s more a case of nostalgia. The eighties and the nineties was the period of films that I grew up on and has the bulk of the films that made their strongest impression on me. So yeah, apologies, but there you go.

It was tough deciding which film to look at for my next Retro-Spection. The problem is that I love too many movies, and having to choose one (out of so many) movies was a challenge. I finally decided on JFK because I’d watched it fairly recently and found that I loved it just as much as when I’d first watched it.

Oliver Stone’s paranoid, furiously paced thriller is, without question, a masterpiece. It is the best film he has made yet and it is highly unlikely that he will ever make anything that will top it.

Kevin Costner (in another of his Man of the People roles) plays New Orleans District Attorney Jim Garrison who, along with the rest of America, is stunned when the then President, John F. Kennedy is assassinated in Dallas, Texas on November 22, 1963. Dissatisfied with the findings of the Warren Commission, Garrison decides to conduct his own investigation into the matter. The more he investigates, the clearer it becomes that the theory of the lone gunman, Lee Harvey Oswald, is improbable, and that it is highly likely that Kennedy was the victim of a successful plot involving a number of people intent on having him killed. 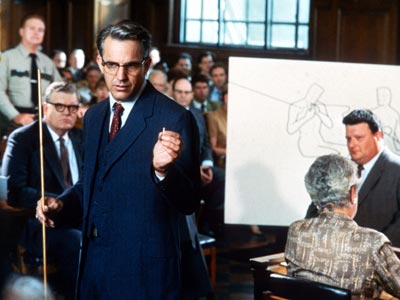 Let’s be clear about this from the start: don’t go into JFK expecting a history lesson. Stone himself has admitted that his film was not an attempt at creating a logical argument for the events of 1963 or what led up to them. Instead, Stone’s film is an effort to create a counter-myth to the absurdity of the official findings of the Warren Commission.

Is that clear? Good, because what you should definitely expect from JFK is to be entertained. It might seem like pretty weighty subject matter from which to expect thrills but it’s the truth. JFK is one of the most enthralling and compelling films you will ever see, and, quite possibly, the fastest three hours you’ll ever experience with a film.

This is mainly due to the endless stream of information that Stone is throwing at us as the film progresses. A witness here, then a piece of video, a photograph, then evidence being pieced together resulting in new implications and while we’re still processing this, we’re presented with a new character dispensing more information.  We might not be entirely certain of what is going on, but somehow, Stone never loses our interest, he rarely allows the pace of it to flag and it is always thrilling.

To get through all this information, Stone and his editors used a mix of different formats, from 8mm to 16mm, black and white film and colour. Once the film is in full swing, it’s constantly jumping from one to the next and the effect can dizzying but never less than involving. Speaking as someone with experience in editing, I can honestly say that I am in awe of what Stone pulls off in JFK.  Cutting so many sources of footage together is one thing; cutting it so that it maintains coherence while being constantly involving is incredible. 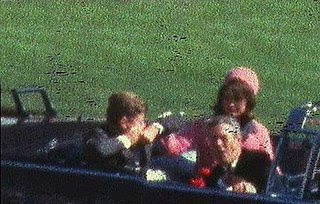 A still from the infamous Zapruder, which was used in JFK 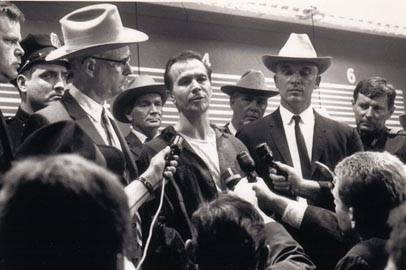 And Stone never falls prey to the kind of mistake that a lesser filmmaker like Michael Bay might make. He never cuts just to keep things moving. He cuts when it works. That’s a sign of a real filmmaker. Keeping things moving is one thing. Keeping our interest is another.

But the film also works because of a cast so vast and varied, it must have taken nothing less than a major miracle to put it together. It’s incredible that Stone has managed to gather this much talent into one film. Further, the cast never feels indulgent or superfluous. Every character, major or minor, is there to serve the story.

Of course, kudos has to go to Costner, in the lead role of Jim Garrison. Every inch the crusading idealist (much like his role as Eliot Ness in The Untouchables) Costner plays the role with determination, stubbornness and sincerity. It’s like watching Jimmy Stewart in Mr Smith Goes to Washington dressed up as a paranoid thriller.

It isn’t just Costner who’s on form here, though. Everyone, from Jack Lemmon to Tommy Lee Jones to Joe Pesci to Sissy Spacek to Kevin Bacon puts in a great turn (on an aside, JFK’s cast is so huge, I think it’s been disqualified from use by the International Rules of the Kevin Bacon game. Because using it is cheating.)

It would be hard to choose my favourite out of everyone, but if pressed, I’d say John Candy as the slimy, jive-talking attorney, Dean Andrews (“The Government’s gonna jump all over your head, Jimbo, and go cock-a-doodle-do. Good day to you, sir.”). It’s clear that he was having a ball with the role and his enthusiasm is infectious.

And let’s not forget Gary Oldman either, who puts in another of his chameleon-esque performances as Lee Harvey Oswald.

John Williams’  score also deserves a mention as it helps give an added push to an already great film. Whether adding a sense of menace or mystery, or giving action an extra bit of punch, the score is fantastic. It’s one of the best scores that Williams has produced, and that’s saying something for the guy who scored Superman, E.T., Jaws and Indiana Jones.

If you haven’t seen JFK yet (SHAME ON YOU!), then don’t be put off by its length or its subject matter. JFK is, first and foremost, an absolutely cracking piece of entertainment. It’s three hours that fly by like a runaway train and it is essential viewing.

You don’t need to break the bank or get caught in order to spy on your spouse. There…