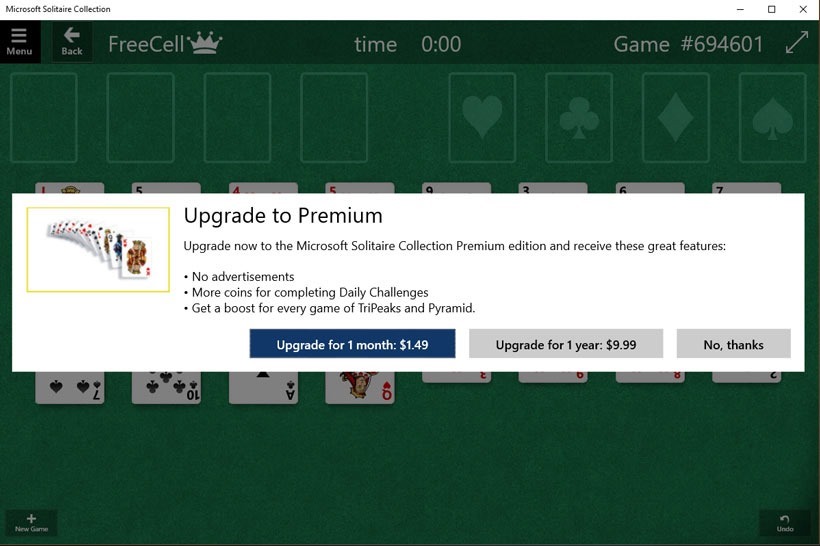 There’s an old joke in computing circles that Microsoft’s MCSE qualification actually stands for Minesweeper Consultant, Solitaire expert. Those bundled Windows games are such ubiquitous time-wasters that they’re probably the most played video games in the history of the medium. Once again, it comes bundled with the latest Windows (having skipped out on Windows 8) – but this time, it’s getting right up people’s noses.

Why? Because it’s stuffed with ads that you have to pay to remove – like it’s some sort of mobile game. That’s precisely how it worked with Windows 8, by the way. It wasn’t bundled with the operating system- instead existing as a standalone freemium product that you could choose to download.

Now it is included in Microsoft’s latest (and by all accounts greatest) operating system, but it’s brought that rubbish freemium nonsense along for the ride. But get this; it’s not a single once-off fee or anything. Instead you can pay $1.50 to nix ads for a month, or $10 for a year. Solitaire, the most basic of Windows gaming experiences, ad-free for $10 a year.  We’re no longer the consumers. We’re the product. The people advertising? they’re Windows’ customers now.

Says PC Gamer: “The ads in question aren’t small banners that appear at the bottom of the screen while you play. They run over the full Solitaire window, some for 15 seconds and some for 30 seconds.”

They do note that they don’t pop up too often, but they’re rather intrusive. Of course, the fact that for most of us Windows 10 is free makes grumbling about this a tad ungracious. The Microsoft Solitaire Collection is available right now within Windows 10. Hooray?