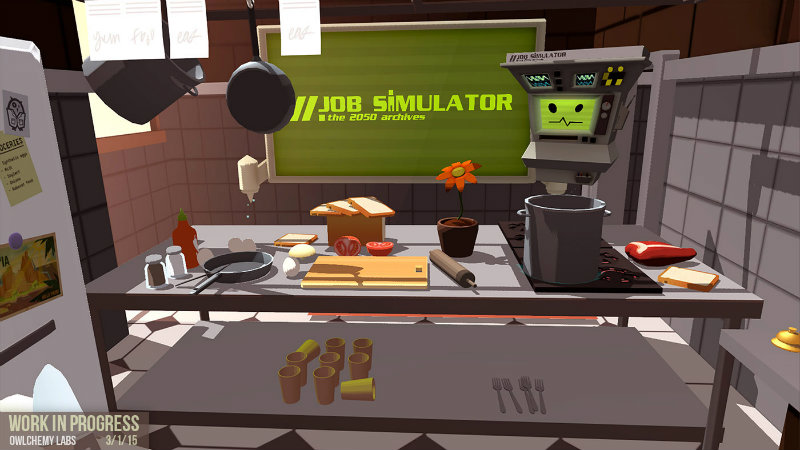 It’s early on a Monday morning and somehow I don’t feel entirely awake despite already downing one cup of coffee. I’m going through the motions of working, but it feels almost like an out of body experience. Now we can simulate what it’s like to work thanks to the power of Virtual Reality and Job Simulator.

Up on the screen during the HTC and Valve announcement of their VR headset was the Owlchemy Labs logo. Exciting stuff for them, as detailed in their own post about it. But it’s the description of the game that has me highly amused and entertained.

The year is 2050.
Robots cook, clean, service, and rule organize the world with precision and speed. Human occupations are now memories of the past; long gone are the blue collar jobs that ran the old world. Humans raised in our perfect automated society must not forget their useless ancient ancestors and history.
This is why Job Bot was born. Job Bot created Job Simulator to teach humans what it is ‘to job’. All praise to Job Bot, for he is the keeper of human history.

It looks like more of a proof of concept than a complete idea of gameplay, but it’s still rather entertaining. Why not make an immersive game that seems like a weird cross between Surgeon Simulator and Cooking Mama? The game seems bizarre and hilarious, which is probably exactly what the Valve VR will need to get people excited from start.

I really need to experience some higher quality VR. I get such bad simulator sickness from indie first person games – despite all the work I did to overcome my first-person nausea, I still get it if the resolution or frame rates aren’t high enough. I’d love to give the Valve VR headset a tech demo, but I’m just worried it would end in my best The Exorcist impression.