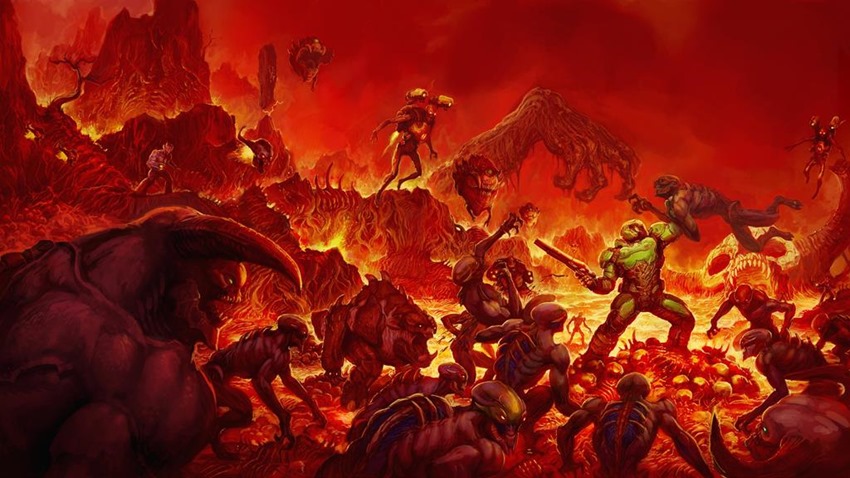 You start out with a pistol. You eventually graduate to a weapon that spits out bullets at a faster pace or a shotgun that feels like a gentle summer breeze caressing you if its buckshot lands from a distance that’s greater than 25cm. You’ve got your regular death-dealers, saving the more exotic weapons in your arsenal for tougher opponents as ammo ain’t exactly plentiful for these guns in particular.

Then you get your hands on that weapon. You know the kind I’m talking about: Those guns and blades which pack so much power, that they’re on the verge of breaking the very game that they were designed for. They’re utterly magnificent, worth the slog it takes to collect them and when you finally pull that trigger.

Oh man, I think I just saw a mound of dirt rise from Charlton Heston’s grave. Here’s a look at ten of the very best ultimate weapons in video games: 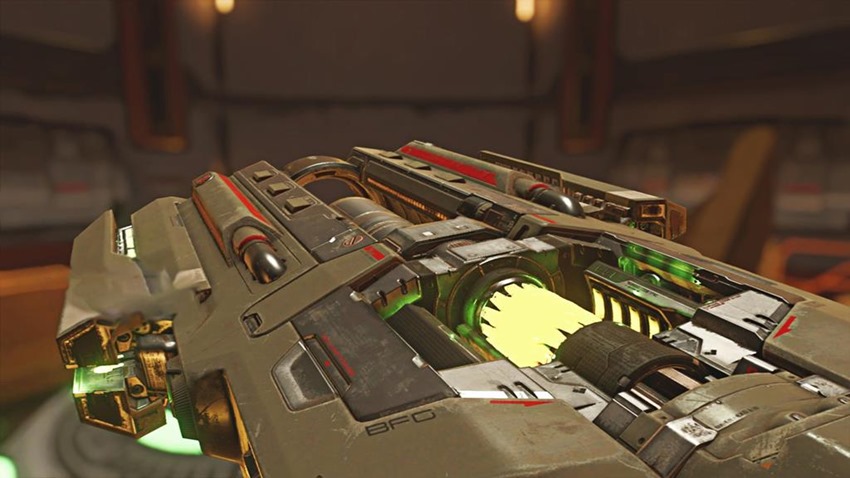 It may be designated as the Bio-Force gun, but to anyone who has ever played DOOM and seen it in action, it has a much more apt name attached to that initialism: The Big F*cking Gun. 2016’s DOOM has arguably the best incarnation of that weapon, a meaty and chunky gun that doesn’t just clear a room of threats, it rewrites the very definition of what an extinction event is when a single round rips through the very fabric of time and space.

Powered by Argus energy and able to rip through mobs, the very first time that players got to wield the BFG in DOOM was a highlight reel of evisceration. After all, it’s hard to improve on the classics. 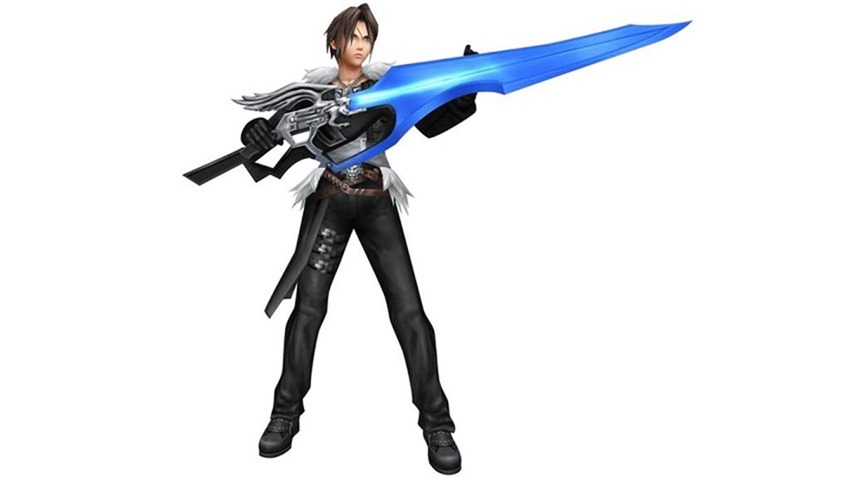 You’ve scoured the world of Final Fantasy 8 for the right parts, you’ve remembered to pick up the crucial recipe needed from a trip back to the past and you finally have the legendary Lionheart gunblade that sends a shiver down the spine of any monster foolish enough to cross your path. Except…it doesn’t do that much damage, does it?

The trick to this ultimate weapon in Final Fantasy 8 wasn’t in a more pedestrian application of blade to flesh, but much like the game itself, it was up to the players to unlock the potential of this gunblade. Once you got your limit break activated and managed to successfully pull off a perfectly triggered Renzozuken, the Lionheart would come to life if RNGesus favoured you.

It saw Squall Leonhart unleash a torrent of attacks, hitting again and again for maximum damage as he carved through his foe. It’s a sight to behold, and triggering the right attack at the right time during your eleventh hour of danger in Final Fantasy VIII was a triumph that never got old. 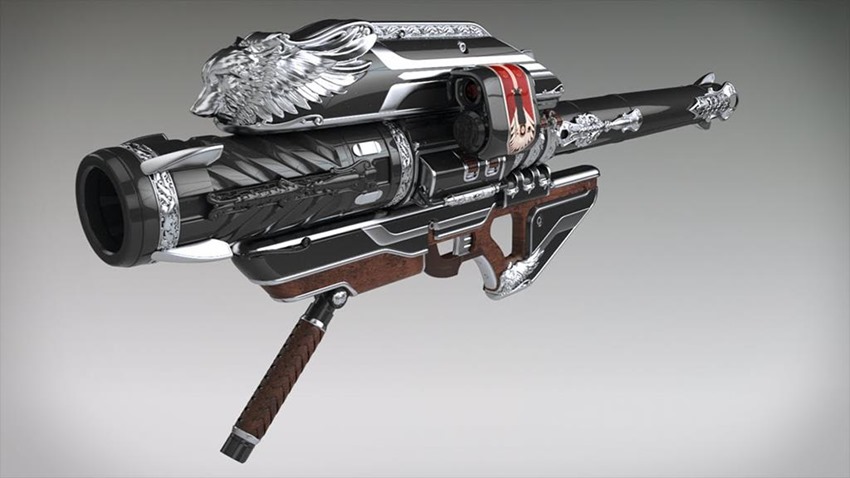 When Destiny first launched, it may have been lacking a lot of the magic that would later make it a triumph, but the Gjallarhorn rocket launcher certainly wasn’t something to moan about. Released early on for a bargain price thanks to a weekly visit from cosmic merchant Xur, the Gjallarhorn was Destiny personified: Loud, fancy and explosive with its payload.

The single best rocket launcher in the game, the Gjallarhorn would be lost to time when Oryx returned to lay siege to the solar system. A year later however, Guardians got a chance to reforge the iconic explosive payload delivery system as a new generation of Iron Lords rose to meet the challenge of defeating the SIVA virus outbreak.

Rebuilt as the Iron Gjallarhorn, this rocket launcher was everything that you loved about the original and given a new lease on life. Massive explosions, cluster-bombs and homing mini-missiles…what more could you ask for?

Blade of Olympus – God of War 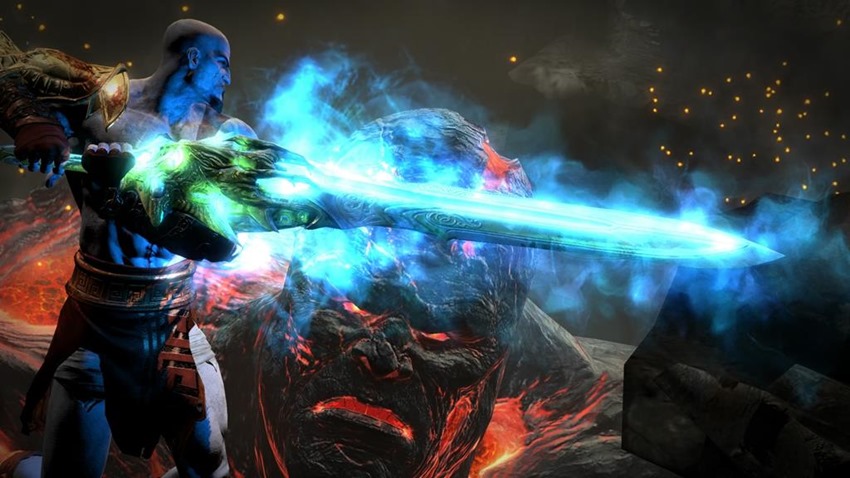 It takes a lot to kill a god in the ongoing saga of the life of Kratos, but the Blade of Olympus was more than up to the task. The single defining weapon that ended a war between gods and titans, the Blade of Olympus is eventually unlocked by Kratos and used to devastating effect during the original Olympian saga of that franchise.

Able to drop devastating combos on opponents, the mythical sword didn’t have any mercy for anyone caught on the receiving end of its edge, something that Kratos would learn the hard way when he channelled his godly essence into the deity-slaying weapon.

Hammer of Dawn – Gears of War 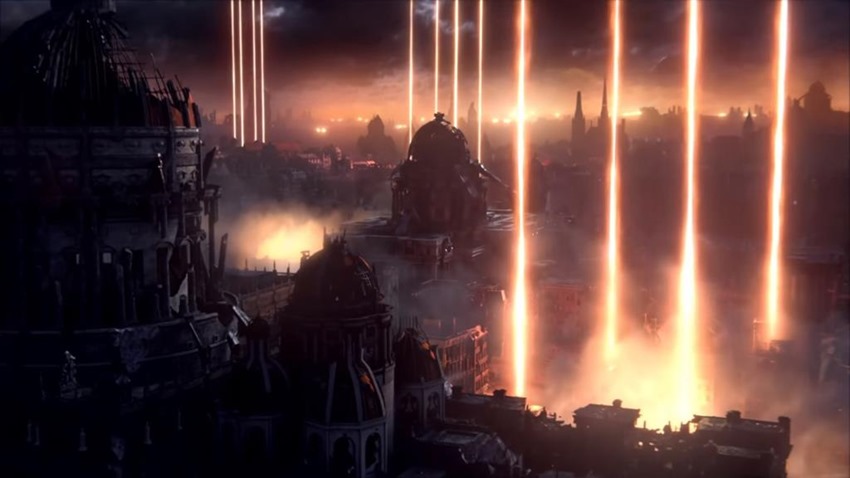 Why use a scalpel when a hammer can do the job better? In Gears of War, sometimes a chainsaw on the end of a rifle wasn’t the best weapon for the job. When the chips were down, and the gnarliest Locust monsters were hot on your tail, only one weapon could finish off the hordes: The unlimited power of a solar cannon hidden high up in the heavens.

While it took some precision timing and decent weather to pull off, the Hammer of Dawn was still the deciding factor in many an encounter, as not even the toughest Locust hide could stand up to its fury when they were painted in the doomsday glow of its laser tracking systems. 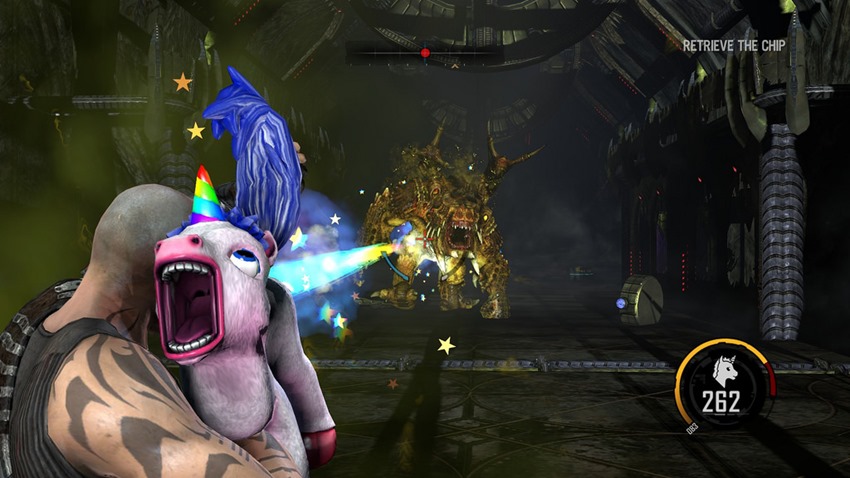 It’s a rainbow unicorn! That shoots highly destructive lasers! FROM ITS BUTT! It didn’t get any more ridiculous than that, and that’s coming from a game that delighted in giving players black hole generators and thermodynamic missiles with which to wreak all kinds of chaos down upon the infrastructure of Mars.

Still, Mr Toots is a love letter to fans who completed Red Faction: Armageddon, a new game + bonus that made the harrowing trip to Mars simply magical. 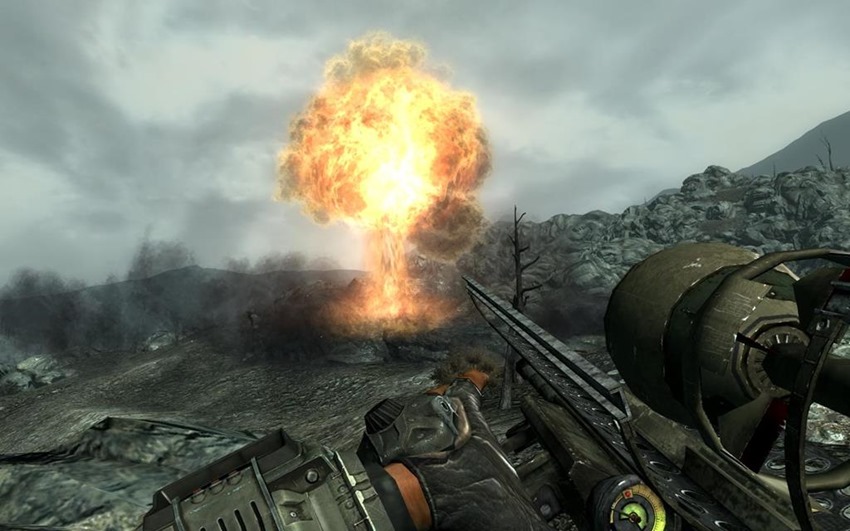 Of course, when you needed to deal damage and you had limited tools with which to do so, Fallout 3 had an answer for you: The Fat Man. What happens when you take a glorified catapault and attach a high-yield thermonuclear bomb to it? The freakin’ Fat Man, that’s what. In a land that was already scarred with radiation, the Fat Man was a chubby middle finger salute to mother nature in Fallout 3, and we wouldn’t have it any other way.

Saints Row had no shortage of ridiculous guns to use throughout the numerous games in that series, but the ‘Merica weapon is possibly the most Saints-Rowsiest gun ever devised. All of the available bang for your buck, the Merican is a red, white and blue tribute to the US of A, a Fourth of July in your hands that would make Michael Bay weep tears of joy if he were to ever see it in action. These colours don’t run but the streets certainly did when the ‘Merican left them flowing with the blood of many a slaughtered enemy.

RYNO-5 – Ratchet and Clank: A Crack in Time 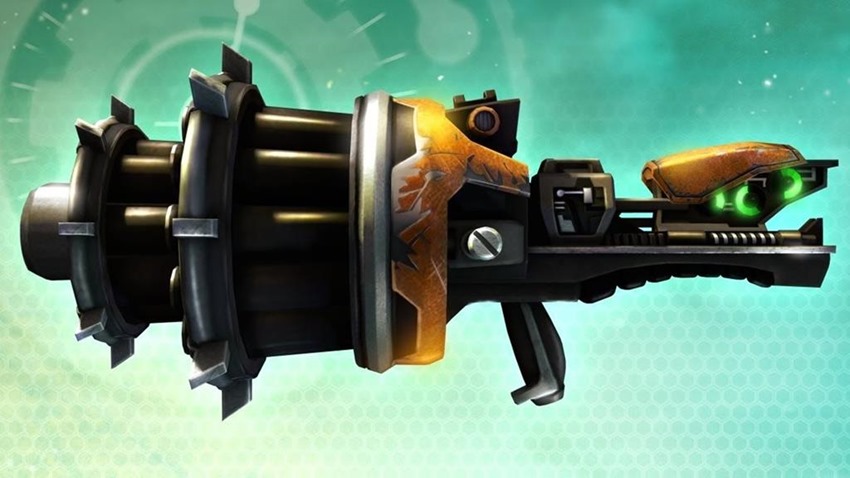 Escalation. That’s always been the buzzword of the RYNO guns in Ratchet and Clank, with the Rip You a New One mark 5 being the sum total of that philosophy. What began with a simple rocket launcher would evolve into something glorious over the years. 1500 rounds of ammo, two barrels cycling in firepower over a central cylinder of chaos that vomited out a missile and played Tchaikovsky’s 1812 Overture at the same time. Not just the best weapon in the series, but the classiest as well. 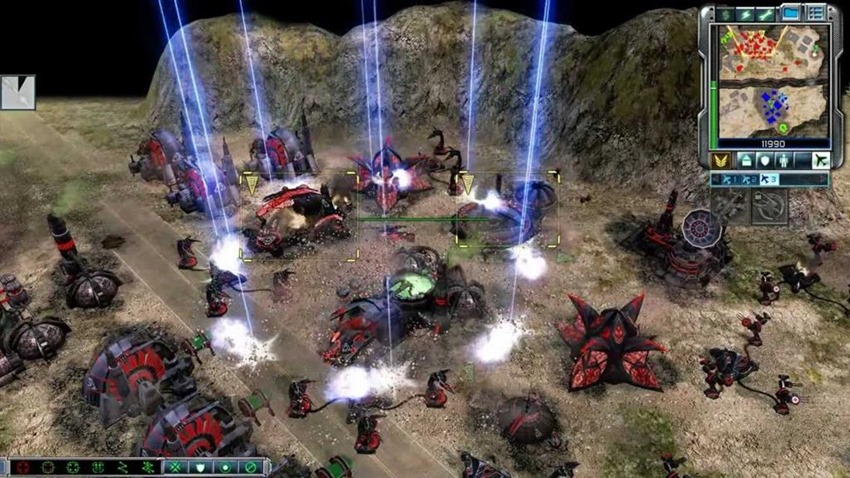 I used to be a big fan of turtling in Command and Conquer, fending off numerous NOD attacks and praying that my defence would hold in case my enemies launched a Mammoth tank blitzkrieg on me. Why? Simply so that I could bask in the glory of an Ion cannon strike. It was poetic stuff, a single moment that had required tons of resources and strategy to pull off, eventually resulting in that fateful tap of a button that unleashed all hell on anyone foolish enough to cross a battlefield to my base.

Bodies were thrown across the screen; tanks were smashed into atoms and buildings were demolished entirely while I sat back and enjoyed a well-earned cup of tea. Take your nuclear missiles and suck it, Kane.