Home Gaming The Amnesia Fortnight prototypes have been chosen 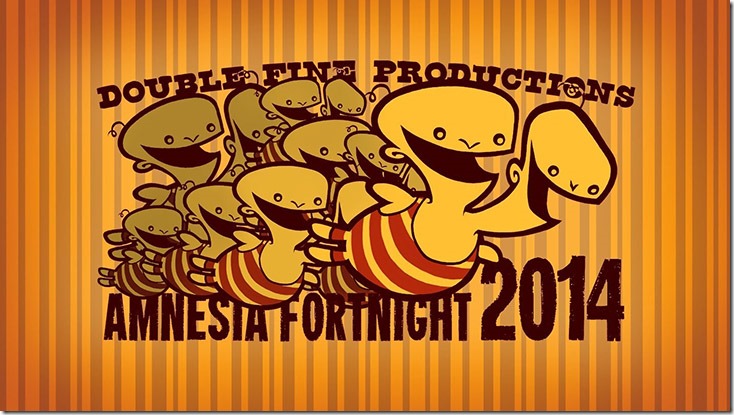 Double Fine’s unique Amnesia Fortnight event is in full swing. A week ago, 31 pitches were made which the public voted on via a page on HumbleBundle.com. Today, they’ve been narrowed down to four games which will all get playable prototypes, and may eventually become full-fledged Double Fine releases.

If you’re not familiar with Amnesia Fortnight, it’s a Double Fine tradition, essentially a two-week game jam. The development team takes two weeks off from the project at hand (currently Act 2 of Broken Age) and “forgets” everything that they’ve been doing – hence the event’s title. It accomplishes several things: the brainstorming often results in some truly inventive ideas, the company can potentially identify leadership qualities in some staff members, and everyone gets to take a mental break from the major project dominating their lives. It seems like a fantastic team-building exercise that can also result in great games. An Amnesia Fortnight event in 2007 eventually resulted in the releases of Costume Quest, Stacking, and Iron Brigade. The 2012 event has given birth to Spacebase DF-9, currently in development and available as a Steam Early Access game.

And now we know which new games will be prototyped over the next two weeks!

This year’s event features a special guest – Pendleton Ward, creator of the popular, Emmy Award-winning Cartoon Network series, Adventure Time. He will be leading a team developing a prototype for Little Pink Best Buds. His pitch video outlines a rather bizarre concept where the player-controlled protagonist is taken out of the trunk of a car by a masked figure, and finds himself in a field with a bunch of small pink people who all want to be his best friend. Watch the video to sample Ward’s bizarre sense of humor – I’m particularly excited to see how the Double Fine team implements game mechanics into this idea.

Double Fine senior programmer Anna Kipnis had her pitch for Dear Leader win out over the pack, and it’s getting a prototype as well. The idea is described as “an emergent narrative game, where you play a despotic ruler guiding the future of a post-revolution Republic.” As you’ll see in the pitch video, games like Papers, Please and Cart Life are invoked as influences, and Kipnis plans to have the title inundated in a dark sense of humor.

Derek Brand, one of Double Fine’s artists, had his pitch for Mnemonic advance to the prototype stage. The pitch video describes his notion for the game – a first-person noir adventure that serves as a murder mystery. Brand wants the experience to revolve around discovering, exploring, and rearranging memories to put together the pieces and solve the murder.

The final pitch to make it this far is Steed, the brainchild of game designer John Bernhelm. In his game, you’ll take control of a medieval horse-for-hire as he (or she?) takes storybook heroes on their quests – who also prove to be quite inept. It operates on the concept that horses have always been able to understand everything about the human race, but simply can’t communicate it. The steed is the clever one in this game. It’s a novel idea and a truly original angle to play on the tired “knight in shining armor” trope.

The voting is over, but you can still be a fly on the wall through the entire Amnesia Fortnight process. If you contribute on Double Fine’s Humble Bundle page, you’ll not only have access to each of the prototypes upon completion, you’ll also be able to watch the daily documentary produced by 2 Player Productions. For my money, that’s the best part. The 2012 event was chronicled in the same way, and I found it fascinating to watch the creation of a video game from pen and paper all the way to playable prototype. To sample the previous series, visit the playlist on Double Fine’s YouTube page.

For now, we sit back and watch the popular game developers fragment into teams dedicated to each prototype. And who knows? We just might get another gem or two to add to our game libraries when all is said and done.