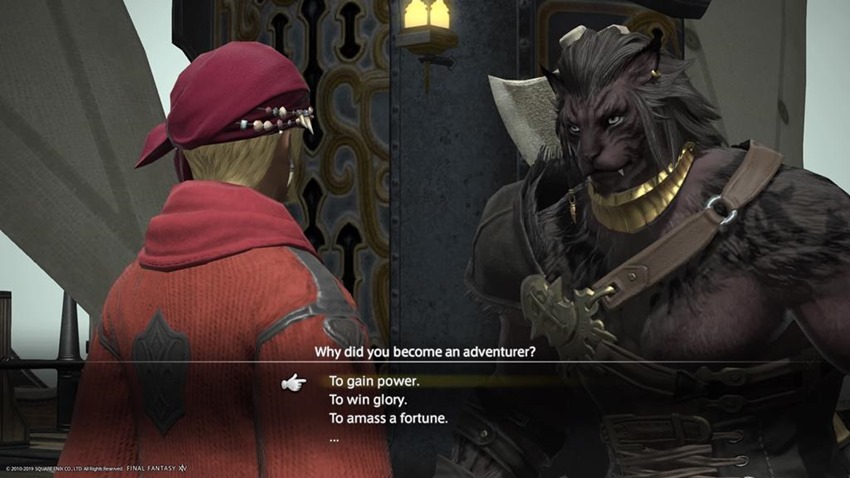 Final Fantasy! A brand synonymous with adventure, magic and homeopathic levels of crystal accumulation. The last decade has been an odd one for the time-honoured brand, as core entries in the series slowed to a crawl and spin-offs began to dominate the scene. The 2010s may have seen the likes of the Lightning saga and Theatherhythm alongside the monumental Final Fantasy XV, but throughout the years Final Fantasy XIV has been trucking along and doing its own thing.

An ambitious new entry in the series when it first debuted back in 2010, Final Fantasy XIV was utter crap on day one. More broken than a jigsaw puzzle dumped in a blender and about as stable as a paint-mixer in an earthquake, the game was in need of some severe fixing. Nine years later, and those fixes haven’t just made Final Fantasy XIV the cream of the MMORPG crop, they’ve revitalised the game across patches and expansions such as Heavensward and Stormblood.

It truly is a realm reborn. 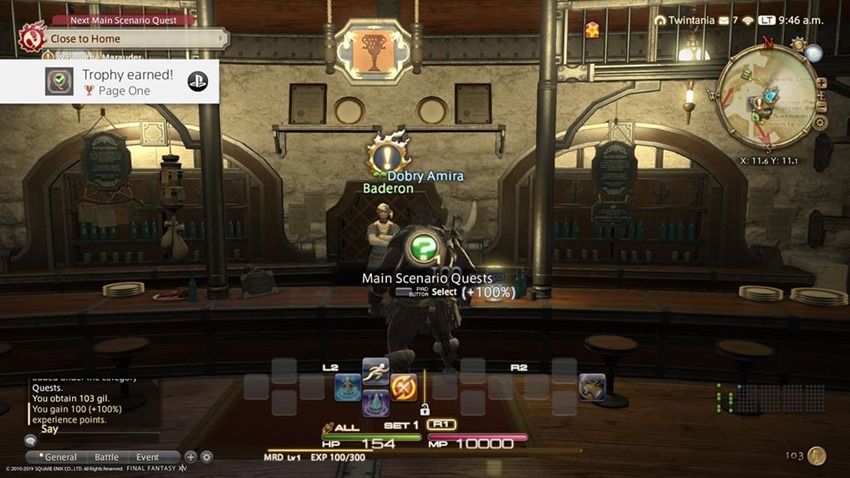 So how does the game handle then for newcomers? With Shadowbringers being recently released, somebody needed to do the legwork and find out if Final Fantasy XIV wasn’t just worth an investment of personal time, but also worthy of the monthly cost that Square Enix charges to play the game in addition to its premium price to hop on in.

That man…is somehow me. Kicking the door to my office in half and telling me to get to work while he refilled his highball Virtua Fighter brandy glass, Geoff tasked yours truly with getting the lowdown on Final Fantasy XIV: Shadowbringers. So I grabbed a skateboard, put on a red jacket and in my very best “how do you do fellow adventurers” I set off to Limsa Lominsa to start a journey that is probably going to consume dozens upon dozens of hours of my life. This…is my diary.

Right, I’ve downloaded more than 40 gigglebytes of game, time to log in and see how this ship handles! 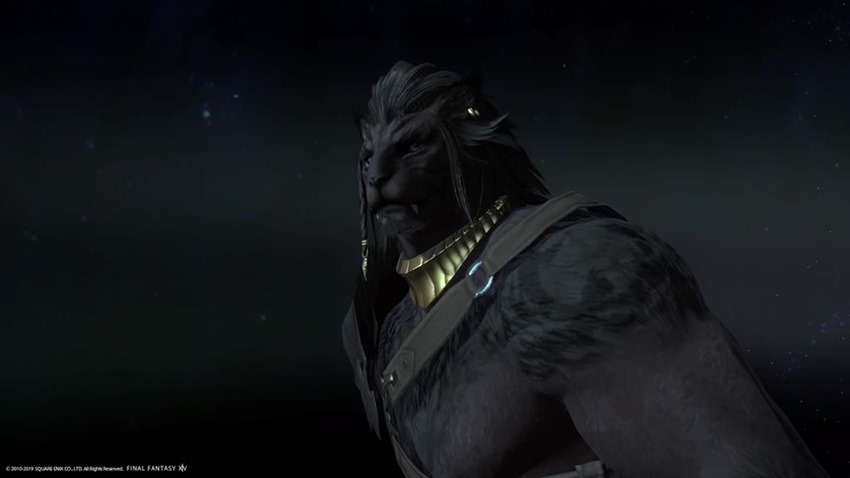 Right, so funny story. I actually bought Final Fantasy XIV years ago, back when Kalahari was going bust and selling the Realm Reborn collector’s edition for peanuts. I nabbed it because I wanted the art book, and installed it on my PS4 without playing Final Fantasy XIV because…reasons. Anyway, the game is locked to my console under a single ID and the hoops I had to jump through to get my account sorted and reactivated makes the Omega Weapon in Final Fantasy 8 look like child’s play in comparison.

If it weren’t for the fact that I had a physical key authenticator, I’d still  be struggling to log in, but now that I can, let the adventure begin! 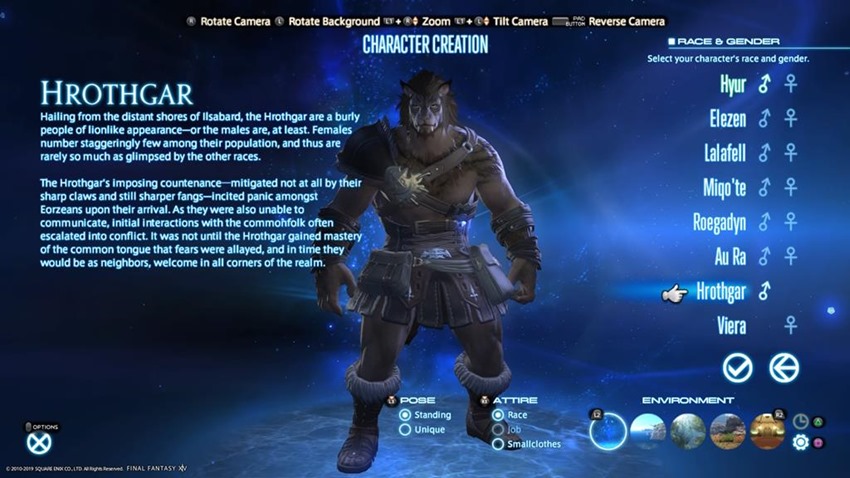 CHECK ME OUT I’M A KITTY CAT NOW! The Hrothigar are apparently a new race in Shadowbringers, so playing the game as one of them just makes sense and oh my gosh look how adorable I am. I’m totally spending the next 100 hours as this dude. Also don’t laugh at my name. Every good variation of my usual handle of “Darranged” was taken so I said stuff it and took a rando generation. I have a race, I have a patron god and the only thing that Dobhry needs now is a sock. 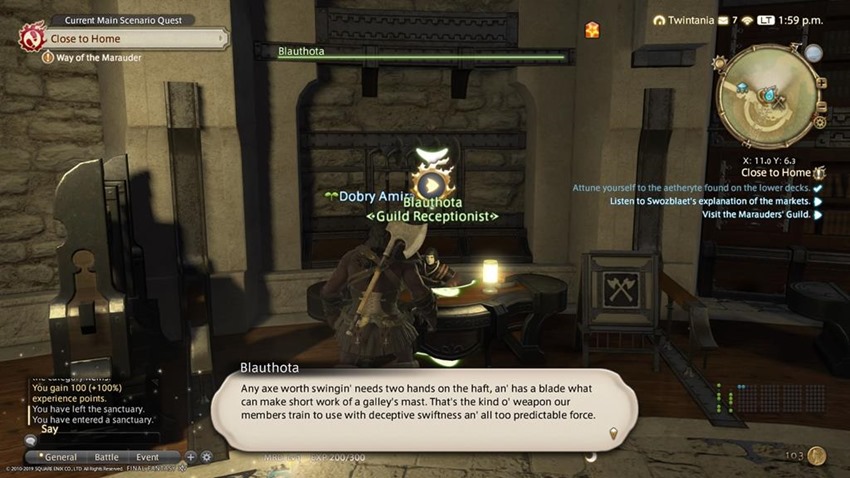 After what feels like an eternity, Dobhry has finally survived a hell worse than all seven circles of the Inferno combined: Conversing with a merchant who butchers consonants in order to create authentic pirate speech. Please, kill me now. Anyway, I’ve done some tasks, sort of got an inkling for the layour of Lomsa Lominsa and I’ve discovered that I can go outside and get my grind on.

First impressions: This is a very very MMOey game. It’s not that I haven’t explored these kinds of games before (Marvel Heroes being a firm favourite before it was shuttered), but Final Fantasy XIV feels like the textbook example of what the genre is like. I’m also somewhat overwhelmed by the amount of information that I have to sift through. 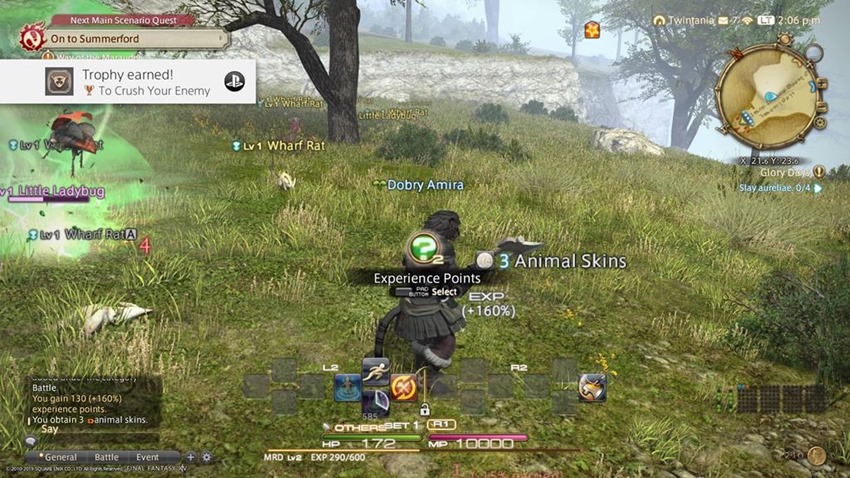 The game does do its best to explain as much as it can to you, but it’s possibly too much exposition to read through when you have the attention span of a dead fly on your car windscreen. The user interface doesn’t sell me much on the action either, as its clearly designed for PC first and lacks that certain sense of immediacy that most modern games offer. 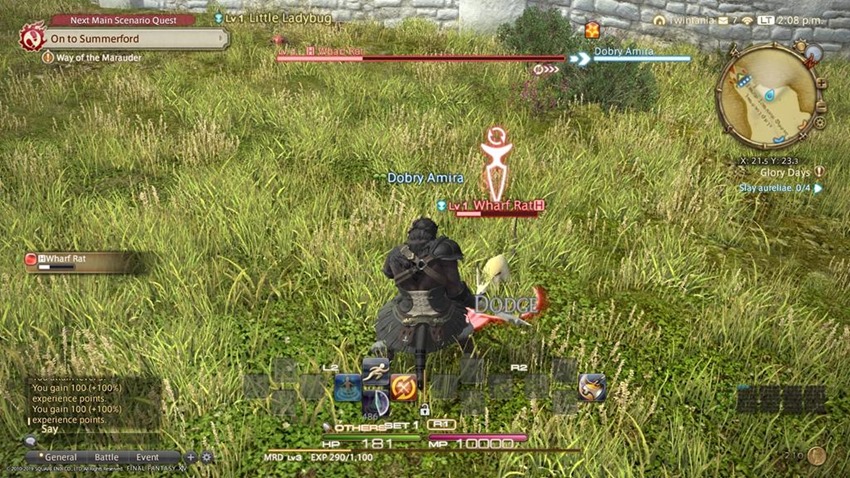 And yet, it does work. Combat tends to be forgiving with one on one situations and I’m getting a feel for my basic combo rhythm of laying down a heavy swing and following up with a proper combo, although I wish I’d paid attention to guzzling down a quick health potion when my life bar dips too low, instead of navigating through the menu to grab one. There’s a lot of stuff here that feels counter-intuitive in the menu design, or maybe it’s just me needing to go back to the menu and learn the proper shortcuts. 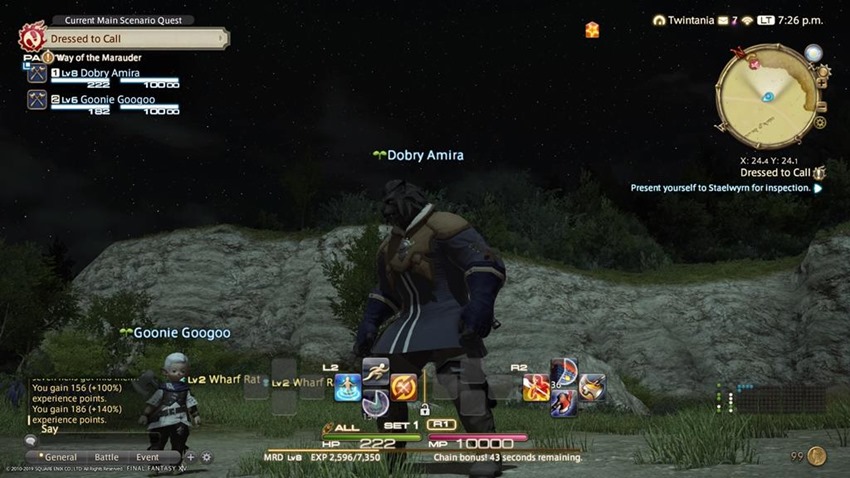 I’ve got a few levels in, my avatar looks dapper as f*** in his new gear and ey look who it is! It’s Dawid Venter from that other gaming news website, SA Gamer! What’s hilarious here, is that if you’ve ever met us in real life, you know just how mismatched our avatars are compared to how we appear in real life. We had a few teething problems connecting at first, but once we were on the same server and did a player search, we were ready to rock and roll!

Credit where credit is due, once our characters were linked up, the action remained smooth and lag-free. Given the epic distance between us on opposite ends of the country, that’s kind of impressive. A good hour of adventuring was had, we got our levels up again and the journey continued! 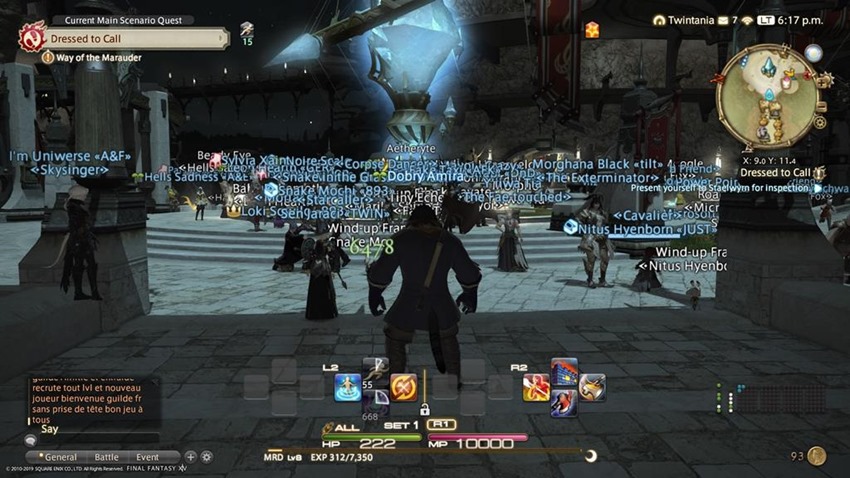 I take it back. Seeing a lobby filled with dozens of players who have chosen anime names for their characters is worse than conversing with people in pirate talk. Please kill me.

I think I’ve got a good idea now on how Final Fantasy XIV operates. I’m currently prioritising main quests, struggling to figure out how to remove my job gauge from my screen and holy Chocobo testicles I just remembered that the PS4 controller has a touchpad. I legit forgot about that…for the last three years. Shame on you, game developers who failed to take advantage of a great piece of tech. Shame on you. 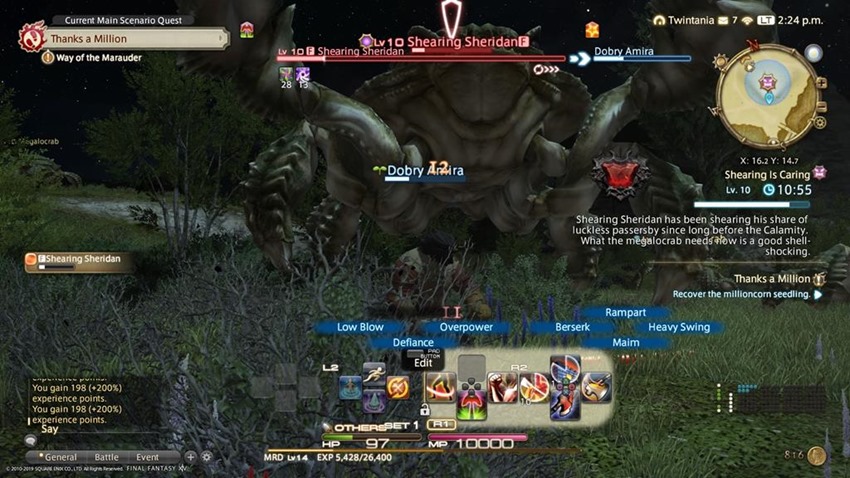 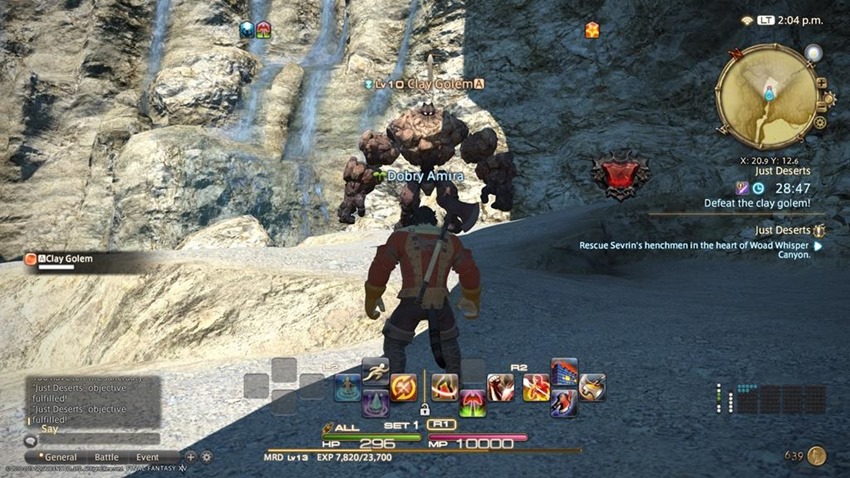 I’m a week into Final Fantasy XIV and while I still think the UI is utter garbage on console, I’m starting to find my groove. The story is ramping up, I’m climbing my way to level 70 and eventually I’m going to reach the Shadowbringers expansion content that’ll allow me to equip Dobhry with new powerful class abilities. 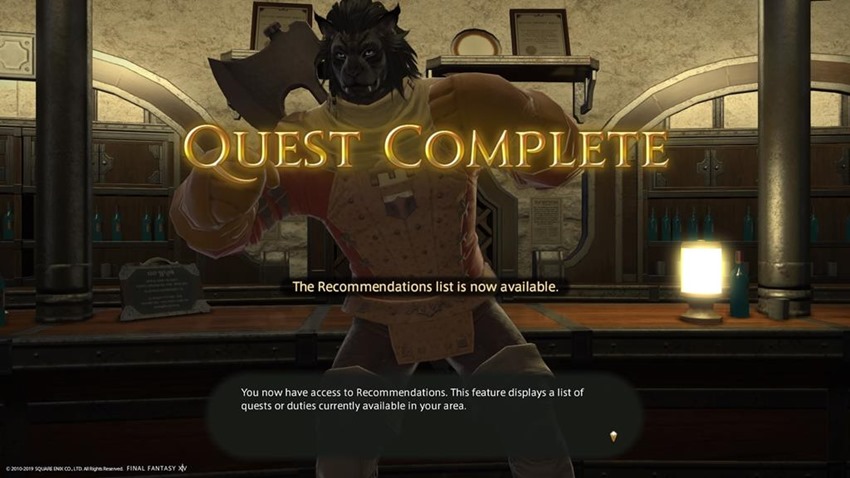 The world is buzzing, I’ve barely scraped the surface on the activities available and week two is about to begin for me as I look to increase my power even further. That’s what an MMORPG is really all about when you think about it: Looking damn cool and having enough strength to crush anything before you as a digital god of that realm. I think Final Fantasy XIV can deliver that experience easily enough.