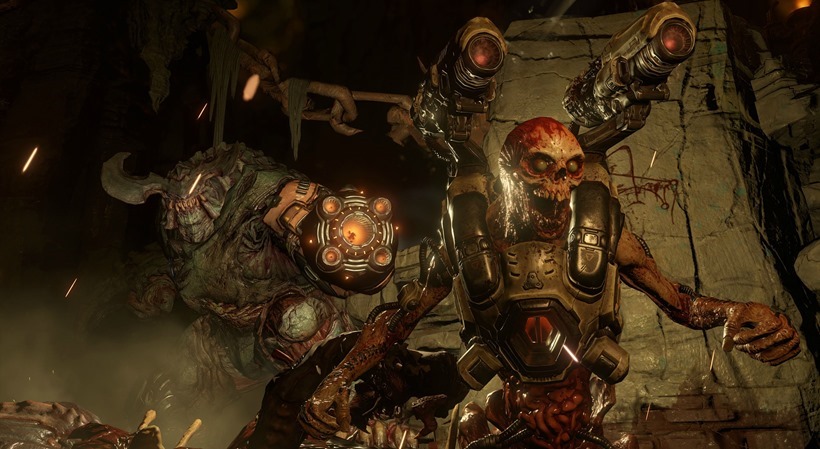 DOOM looks like some old-school fun in a lot of ways. A proper health bar, a ridiculous amount of weapons and enough violence to give an early-1990s politician the kind of erection that a bottle of Viagra failed to deliver on.

That’s going to define the game, as the closest real-world equivalent we have of of chainsawing a demon in half in that game, is getting a Moonsault power-bomb from the Hardy Boys in a WWE TLC match.

Just don’t expect that kind of behaviour towards humans, as inflicting that kind of pain is reserved for demons in DOOM. And the people who bankroll Afrikaans musical movies as soon as I win the lottery.

“I wouldn’t do that necessarily with humans but when you’re doing it with demons, the gloves are off,” executive producer Marty Stratton said to GamesRadar, who then revealed that the team at iD did have some limits however.

We do have the filter internally, where we’re coming up with something, or an idea is presented, or somebody does an animation – if we look at it and we kinda chuckle when it happens, then we’re on the right track. If you’re like ‘Ooh, I don’t know’ and cringe then, okay, let’s adjust.

The massive amounts of gore that occur on screen, aren’t just for kicks and giggles. They actually tie into the core gameplay mechanics, as Stratton explained:

With the execution moves, they obviously, visually, play a big part in the tone of the game. But they play a big part in the actual gameplay. That is really what comes first. They’re very fast. There’s almost a rhythm or a cadence to to them. So when our animators are putting them together you almost got this ‘dada-dada-boom!’ and you’re out. And if they have that rhythm and cadence then we know we’re on the right track with them.

Look, as long as I get a shooter with enough violence that every single bullet fired and skull ripped off voids the warranty on my organ donor’s card, I’m happy.