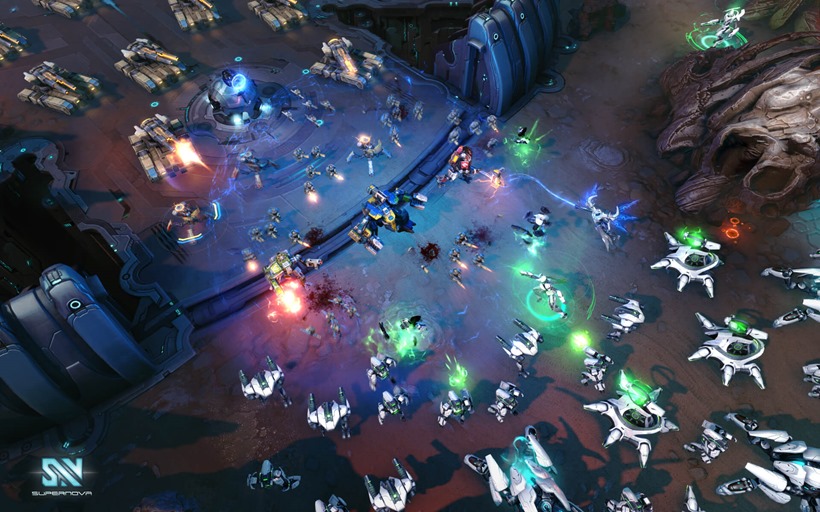 This is a headline that I should’ve written months ago – in February as a matter of fact. I don’t know what rock I was hiding under at the time, but I completely missed the fact that Bandai Namco – the publisher of games like Pac-Man and Tekken – are working on a MOBA. No, this isn’t a crossover game like Heroes of the Storm that sees a pill eating yellow dude go up against a jaguar mask-wearing wrestler (that sounds awesome though!). It’s far more futuristic, featuring some badass mechs.

I’m going to go ahead and assume you knew nothing about it either. You’re a dedicated reader who would never dare browse news on another gaming site… right? RIGHT? Anyways, Geoff put me onto the game via a preview over on Gamespot. I was going to write it off as another MOBA clone, except it looks rather decent.

It’s called Supernova, and according to the Gamespot article, is the love child of StarCraft II and League of Legends. Heck, that sounds fantastic already!

Supernova brings innovation to MOBAs through its exciting sci-fi universe that offers upgradeable minions, crafting from drops, the mysterious Supremacy ability and an unparalleled line-up of commanders. Only by mastering all that Supernova has to offer will you advance your interstellar civilization!

Here are some key features and what the game looks like in action:

The most obvious change Supernova makes to the MOBA formula is that it allows players to customise their army as the game progresses. That sounds really cool, but I don’t know how Bandai Namco will balance it all properly. Balancing heroes alone can be a nightmare. Balancing heroes and units could be a recipe for disaster.

Still, it’s a unique approach to the genre, and a great feature – one I really hope pays off. We’ll have to wait and see. In the meantime, if you’re interested, you can apply for alpha access right here.